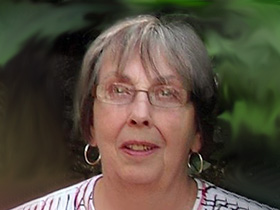 Born on August 30, 1938, in South Plainfield, New Jersey, Helen Ruggieri has worked as both an editor and a publisher, and for over twenty years, she has also taught at the University of Pittsburgh, Bradford Campus. Ruggieri's poetry encompasses many diverse themes, including the feeling of being a foreigner, growing up in Pennsylvania, and observing the natural world.

Helen Ruggieri was born in South Plainfield, New Jersey, on August 30, 1938, to James Gordon and Lily Mitchell. Her family frequently moved during her childhood, and after attending six different elementary schools and two high schools, she graduated in 1956 from Blakely High School, in Blakely, Pennsylvania. Her strongest connection to Pennsylvania comes from this period. During this time, she connected with poetry via school textbooks, though she would not seek out younger, female poets like herself until her college years.

Ruggieri attended Keystone Junior College for one year before transferring to Pennsylvania State University. She graduated with a BA in Arts and Letters (Literature in English) in 1960. She received two degrees for post-graduate work: an MA from St. Bonaventure University in 1972 and an MFA in poetry from Pennsylvania State University in 1990, where she received the Academy of American Poets Prize. In 1963, she married Ford F. Ruggieri, and together they have three children: Maria, Ford Mitchell, and Andrea.

Aside from writing poetry, Ruggieri has worked in jobs as both an editor and a publisher. One of her first jobs was Society Editor for the Olean Times Herald. She has also worked as an editor and publisher at the Allegany Mountain Press. She served as a professor in composition at Jamestown Community College, then as an English professor at the University of Pittsburgh (Bradford), in addition to running independent writing workshops for the African American Center for Cultural Development in Olean, NY.

Ruggieri was first published in the English Journal in the early 1970s. Since then, she has been featured in many anthologies, contributed more than 200 poems to magazines and other publications, edited Written on Water: Writings About the Allegheny River (2019), and written several books of poetry, including The Poetess (1977), and The Kingdom Where No One Keeps Time (2015). She has also written creative nonfiction pieces. For example, she wrote The Character for Woman (2002), a collection of memoir essays about being a visitor in a strange culture, after a long visit to Japan, during which she also worked as a visiting professor for Yokohama College of Commerce.

Ruggieri feels that her poems are accessible for all age groups, and one of her major themes is the angst that comes from being a teenager. When discussing the connection between herself and the reader of her poems, Ruggieri stated, "I hope that I can touch some aspect we have in common, some shared emotion, some moment."

In her book Glimmer Girls (1999), "Under the Arbor" perfectly captures the attitude of little girls playing house and their attempt to imitate adults. "The Worst We Did to Each Other" is more about teenage girls, drawing upon examples such as girls sneaking out of their house, giggling to each other, and dancing to the jukebox. Ruggieri's language and word choice are simple but precise, evoking memories from childhood and emotions never quite forgotten. Ruggieri continues to write poetry prolifically, often taking inspiration from the natural world, her own life experiences, and Japanese culture.

Throughout her career Ruggieri has received several awards for her work, including a Sasakawa Fellowship from the Nippon Foundation in 2001, the Allen Ginsberg Prize from the William Paterson College of New Jersey, and poetry prizes from the Artists Embassy International and Goose Festival. Her work in the following anthologies earned her nominations for the Pushcart Prize: Earthtones: Twenty Years of Uncommon Nature Writing, Knocking on the Silence, Common Wealth: Contemporary Poets on Pennsylvania.

At the time of this writing, Ruggieri resides in Olean, New York, where she continues to write poetry from her home.