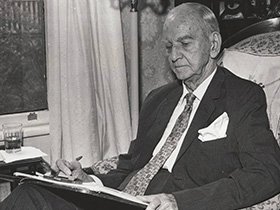 Rutledge lived many years in Pennsylvania, but was most at home in South Carolina, where he served as the state's first Poet Laureate and where he is remembered as an influential advocate of conservation.

Though not a native Pennsylvanian, Archibald Rutledge spent a good deal of his adult life at the Mercersburg Academy in Franklin County. Upon his retirement, he published poetry and fiction, particularly associated with the outdoors. In 1934 he became South Carolina's Poet Laureate after his return to that state. Rutledge passed away in 1973.

Rutledge attended Union College in Schenectady, New York. He was a member of the American Society of Arts and Letters, the American Poetry Society, and the Neucomen Society. After he graduated in 1904, Rutledge began his career as an English teacher at Mercersburg Academy in Mercersburg, Pennsylvania. He remained at the academy until 1934. When Rutledge retired from teaching, he returned to South Carolina and began restoring his plantation home, establishing gardens that attracted many visitors. He had a great knowledge and love of nature. He once wrote, "I am not a joiner, but a (leisure-time) hunter, forester, [and] archeologist."

Rutledge was a great storyteller with many literary accomplishments. He wrote his first poem, "I saw a little rattlesnake / Too young to make its rattlers shake," when he was only seven-years-old. When asked about his writing, he said, "My formula is to find a subject worth writing about and then to make it simple, and then to make it clear and then to make it reach the heart and then to make it beautiful." Rutledge's work is represented in anthologies. Some of his most famous work includes Under the Pines (1906),Songs From a Valley (1919), and South of Richmond (1923). He has contributed more than 1,000 articles and poems to magazines. He recorded 75 of his poems for the Library of Congress, and more than 60 of his poems have been set to music.

In 1934, Rutledge became South Carolina's first poet laureate by executive action. The legislature called him "distinguished in literature." He was also South Carolina's elector to the Hall of Fame. He achieved seventeen honorary degrees, including a Masters of the Arts from Union College in 1907. He received more than thirty medals, including the John Burroughs Medal for nature writing. The Archibald Rutledge Academy in McClellanville, South Carolina, and the Archibald Rutledge Scholarship Fund for academic and artistic excellence were both named after him.