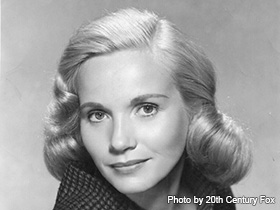 Eva Marie Saint is a motion picture, stage, and television star who was born in Newark, New Jersey in 1924 and grew up in Delmar, New York. Saint graduated from Bowling Green State University in 1946 with a Theater Arts Degree and she credits her Delta Gamma sorority for fostering confidence in her ability as an actress. In a quest for success and financial independence, Saint moved to New York and supported herself with modeling and radio bits while attending the Actor Studio. Her initial years of acting took place during the Golden Age of television, when she made a name for herself playing roles in such productions as Our Town (1945-1957) and Middle of the Night (1948-1955). She is the recipient of the 1958 Golden Globe her role in "A Hatful of Rain" and starred in what is considered one of the greatest suspense films ever made, Alfred Hitchcock's North by Northwest (1959). Active today in both theatre and film, Saint has been married for 61 years and says that her happiest achievements remain her children and three grandchildren.

Eva Marie Saint was born on July 4, 1924, in Newark, New Jersey, and grew up in Delmar, New York, attending high school at Bethlehem Central (where she would later be inducted into the Alumni Hall of Fame in 2006). Her mother was a school teacher who designed and sewed all of the dresses Saint and her older sister by two years, Adelaide, wore in their youth. Saint's father maintained a lifelong business career at B.F. Goodrich, providing his family plenty of comfort and security; however, he insisted that both of his daughters work for a couple of years out of college before they got married.

A successful student, active in everything from chorus and dance to field hockey, Saint followed her sister to Bowling Green State University in pursuit of an Education degree. She intended on becoming a schoolteacher like her mother, that is, until her Delta Gamma sorority sister dared her to audition for the school play, "Personal Appearance." From there, Theater Department head, Dr. Elden T. Smith, encouraged Saint's talents and was pivotal in her decision to pursue acting as her career of choice. Saint also credits the camaraderie of her sisterhood for fostering a sense of reassurance and self-confidence during her formative college years. "They talk about being in the right place at the right time," she told fellow Delta Gamma, Whitney Parker Scully. "The right place for me was Delta Gamma." Saint graduated from Bowling Green State University in 1946 with a Theater Arts degree, and the University has since dedicated the campus theater in her name.

Following her father's request, Saint left college seeking financial independence and moved to New York on her own. She modeled and did bits on radio, while studying at the Actors Studio. Her first exposure to a national audience came via radio and television dramas in the 1940s. Her first seven years of acting were spent in the Golden Age of television, when she made a name for herself in notable roles, such as Emily Webb opposite Paul Newman and Frank Sinatra in a production of Our Town for Producers' Showcase (NBC, 1954-1957) and Middle of the Night for Philco TV Playhouse (NBC, 1948-1955), for which she received an Emmy nomination in 1955. Saint also scored a professional triumph on Broadway opposite the legendary Lillian Gish in The Trip to Bountiful, which earned her a Drama Critics Award in 1953. This role also garnered the attention of Elia Kazan, who in turn cast Saint in "On the Waterfront" (1954), her first big screen performance that won her an Oscar for Best Supporting Actress.

In the 1960's, Saint spent less time in Hollywood and more time with her husband, TV director Jeffrey Hayden, and their two children. She appeared in more TV roles, including Taxi (NBC, 1978), a two-person drama with Martin Sheen that earned her an Emmy nomination and The Best Little Girl in the World (ABC, 1981). She received five Emmy nominations in all and contributed to the success of shows such as "Middle of the Night," by Paddy Chayevsky, "How the West Was Won," and My Antonia," with Jason Robards. In the midst of her active TV schedule, between the 1980's and 1990's, she returned to moviemaking for the first time in over a decade as Tom Hanks' mother in the Garry Marshall comedy Nothing in Common (1986). She also guest-starred as Maddie Hayes' mother on the hit series "Moonlighting," with Cybill Shepherd and Bruce Willis.

Saint has appeared in numerous plays on Broadway, at the Kennedy Center in Washington, D.C., and in Los Angeles. In 1986, her performance in the "Country Girl" earned her a Drama-Logue Award.

Recently, Saint has done voice work for the animated series, "The Legend of Korra," and has wrapped up the filming of "Winter's Tale," a forthcoming fantasy movie starring Will Smith, Matt Bomer, Jennifer Connelly, Colin Farrell, and Russell Crowe.

Married for 61 years, Saint and Hayden have collaborated on many theatrical projects and are performing together in "Love Letters" and "On the Divide" in theatres across America.

"I'm still proud of my Oscar," she told Vanity Fair's John Heilpern. To this day described as humble, Saint cherishes her career but her children and three grandchildren remain her happiest achievements. "Sometimes, when the children were younger, they would ask if their friends could go upstairs and just hold it. So I'd take them upstairs." Now her grandchildren ask the same for their young pals. "'Can they just hold the Oscar?' It's so adorable," she added. "And I say sure."