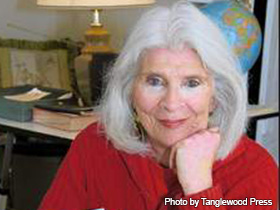 Children's author Harriet May Savitz spent much of her writing life in Montgomery County.

Harriet May Savitz was an author of children's books. She was born in Newark, New Jersey, in 1933. Savitz began writing when she was nine-years-old. She moved to Pennsylvania with her husband, Ephraim Savitz, soon after college. After taking many creative writing classes and writing her first two novels with Maria Caporale Shecktor, she met Charles Blockson who introduced her into the world of writing stories on people who have disabilities. Throughout her adult writing career, Savitz wrote many stories that were based on real people and events. Savitz died in 2008.

Harriet May Savitz was given inspiration for her children's stories from her daily life. According to an interview conducted by Contemporary Authors Online, Savitz said, "I find that my books walk into my life...Sometimes I just stand somewhere, sit somewhere, walk somewhere, and I feel it—the book...From that moment on, there is no other world." This approach to writing helped Savitz create many novels that sent readers powerful messages.

Savitz was born Harriet May Blatstein, the first child of Samuel and Susan Blatstein, on May 19, 1933, in Newark, New Jersey. The Blatsteins were a small family; they did not have their second child, a boy, until Savitz was 11-years-old. According to Jaqueline Shachter Weiss in Profiles in Children's Literature, Savitz's father lost his business, a produce stand, during the Great Depression. Savitz continued to pursue her passion for writing. According to her website, she always knew she wanted to write since she was a young child, composing her first poem at the age of nine.

Savitz attended college at Upsala College and Rutgers University. However, according to Weiss, since her family could not afford college tuition, Savitz only attended noncredit classes. After college, the young writer married Ephraim Savitz and they moved to Plymouth Meeting, Pennsylvania, and had two children together: Beth and Steven.

After moving to Pennsylvania, Savitz realized she still wanted to pursue a career as a writer. She began attending high school creative writing classes in the evenings. During this time Savitz began publishing her works. She started publishing with her creative writing teacher, Maria Caporale Shecktor. The first two works were The Moon Is Mine(1968) and Peter, and Other Stories (1969). The latter of the two books is a collection of five different stories, and three are written by Savitz: "Peter," "Why, Bo? Why?," and "The Road to Anywhere." The stories are about young men who learn how to escape the pressures of their middle class life through their intense situations. The Moon Is Mine is a compilation of three stories about children living in a slum, West Alley, where they learn to conquer their apathetic ideals that sprang from their living conditions. A year after the two books were published, Savitz met Charles Blockson, an African-American historian. According to Weiss, Savitz became interested in writing books about disabled children because Blockson was wearing a lapel pin in the shape of a wheelchair sports emblem.

For most of the rest of Savitz's career, she focused on writing stories and novels about those who were physically disabled in some way. According to the 1983 interview recorded by Weiss, Fly, Wheels, Fly!(1970) is written about a paraplegic basketball player named Edward R. Davenport. Additionally, On the Move(1973) is written about people with disabilities (many paraplegic) who resided in the Glen Harris Rehabilitation Center. The Lionhearted(1975) is about Rennie, a woman who was disabled in a motorcycle accident, and Wait Until Tomorrow(1981) is about Savitz's father, who had a laryngectomy and a devastating surgery. Come Back, Mr. Magic(1983) is about a loved therapist, Norman Constantine, who was hit by a car and left in a coma.

Harriet May Savitz was nominated for several awards relating to specific novels throughout the years: Fly, Wheels, Fly! was nominated for Vermont's Dorothy Canfield Fisher Children's Book Award, 1971; and Run, Don't Walk (1979)was a California Young Reader Medal nominee, 1983 to 1984. The Lionhearted was listed in University of Iowa's Books for Young Adults, 1975 to 1976, as one of most popular books read by teenagers, and she also won the Outstanding Author Award from the Pennsylvania School Library Association in 1981. Savitz received recognition for Wheelchair Champions (1978), in celebration of the International Year of Disabled Persons.

Savitz spent her retirement years in Bradley Beach, New Jersey. During her retirement, Savitz continued to write for newspapers, national magazines, and Chicken Soup for the Golden Soul. Savitz's husband died in 1994, a year after she had a major cancer operation. She often taught writing classes at the senior center, advising her students to "Write! Write! Write! Make the characters come alive, and be honest."

Harriet May Savitz died of pancreatic cancer on July 20, 2008, in Neptune, New Jersey.