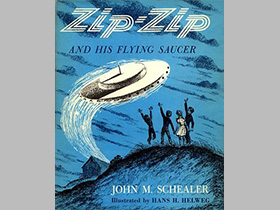 John M. Schealer was born in 1920 in Boyertown, Pennsylvania, and he later graduated from the University of Pennsylvania. He authored a children's astronomy textbook, a fictional story of ancient Egyptian antiquities, and three science fiction books for youngsters featuring a character called Zip-Zip. He died on February 11, 2008.

On July 5, 1920, in Boyertown, Pennsylvania, John Milton Schealer was born to Roy, a dentist, and Helen (Kern) Schealer. He earned his BAfrom the University of Pennsylvania in 1943. Schealer went on to author an astronomy textbook for elementary school students as well as several science fiction books for youngsters.

His one nonfiction work, This Way to the Stars (1957), is a student textbook oriented towards 10 to 14-year-old readers. The textbook is a historical study of astronomy, including physical characteristics of outer space and descriptions of various astronomical tools. The Sycamore Warrior: A Mystery of Ancient Egypt (1960)is about a mysterious ancient figurine that ties together two boys from different time periods during ancient Egypt. Schealer also wrote three science fiction books for youngsters, and each book features a character named Zip-Zip. The first in the series, Zip-Zip and His Flying Saucer (1956), concerns the adventure of Randy Riddle and Zip-Zip, who are searching for and locating a steam shovel to deliver to Rady's father, a construction engineer. Villiers Gerson of the New York Times commented that "the writing has a condescending tone."

Schealer wrote the script for a sound and light festival for the Castillo de San Marcos National Monument in St. Augustine, Florida, and he is also the founder and past executive vice-president of the Sound and Light Corporation of America. He died on February 11, 2008.