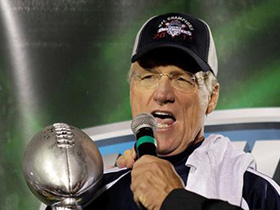 Marty Schottenheimer, born in Canonsburg, Pennsylvania in 1943 and spending his high school years in the state of Pennsylvania, had a short stint as an NFL player, but is mostly known in the league for the work he did as a head coach. He began coaching in the NFL in 1975 and became a head coach in 1989 for the Chiefs, remaining a head coach in the league on and off until 2007. Schottenheimer is most famous for having the most wins since 1966 without a Super Bowl championship.

On September 23, 1943 in Canonsburg, Pennsylvania Martin Edward Schottenheimer was born, but soon he would only be known as Marty. Schottenheimer had what people would call a normal upbringing going to school and having two very hard working parents. The family spent his entire childhood in Canonsburg and for high school he attended Fort Cherry High. There he excelled at the linebacker position and was able to go play that position for the University of Pittsburgh where he started all four years.

He was a very productive player in college, but was looked at as only an average prospect for the pro level in 1965. That year there were drafts in both the NFL and AFL and in fact Schottenheimer was drafted in both leagues. In the NFL, he was selected fourth round by the Baltimore Colts, while the Buffalo Bills of the AFL selected him in the seventh round. He decided to go the route of the rival league AFL and hopped on board with the Buffalo Bills where he would play for the next four seasons. During his time with the Bills he helped bring them an AFL Championship title in his rookie season while also being selected for the AFL All-Star Team. After this somewhat illustrious career in Buffalo, Schottenheimer bounced around from the Boston Patriots to the Pittsburgh Steelers and finally to the Baltimore Colts from whom he would retire in 1971.

After Schottenheimer's short lived NFL career he dabbled in the real estate industry, but missed the game he had played for so long and in 1975 joined the New York Giants as a linebackers coach after holding that position for the Portland Storm for the World Football League the year before. He remained in this position for two seasons and then was promoted to defensive coordinator where he spent one season until he moved to the Detroit Lions to become their linebackers coach for the 1978 and 79 season.

Schottenheimer's coaching career did not take off, however, until he found his place in Cleveland as their defensive coordinator. He would spend three years in this position until the firing of the head coach, Sam Rutigliano, halfway through the season allowed him to take over the team where he thrived in this new role. The Browns would go 44-27 during his four and a half year tenure, being crowned AFC Central Division champs three times and making it to the AFC Championship game twice.

After a somewhat disappointing season taking second in the AFC Central and losing in the AFC Wild Card Round in 1988, Schottenheimer decided he had spent enough time in Cleveland and moved onto Kansas City to become their head coach for the next ten seasons. In Kansas City he did a phenomenal job turning around a football team that was 4-11-1 the season before he took over and turned them into a playoff contender year in and year out. During his ten seasons there he racked up a 101-57 record with his most impressive season coming in 1995 when the Chiefs had an NFL best 13-3 record and also created a new franchise record of making the playoffs with its' sixth consecutive playoff appearance in a row. However, Schottenheimer's playoff woes that he would later become famous for were apparent that season losing its first game of the playoffs making it a very disappointing season for both the team and for Schottenheimer. He would remain with the team for another three seasons including another 13-3 season in 1997 where the Chiefs would lose once again in the first round of the playoffs. He would then retire from the game of football after the 1998 season where the Chiefs went an embarrassing 7-9, placing last in their division.

Although at the time it seemed as though Marty Schottenheimer had left the game as one of the best regular season coaches ever in 1998, he would try to revamp his horrid playoff record that had tarnished his work he had done during his 14 ?? seasons as a head coach. In 2001 an ambitious owner, Daniel Snyder, widely known around the league as a risk taker and a big spender on player contracts, talked Schottenheimer out of staying in retirement and in 2001 Schottenheimer became the head coach for the Washington Redskins. With tons of free agent pickups and what seemed like a definite playoff contending team, Schottenheimer and the rest of the organization felt they had a chance at a Super Bowl title. Unfortunately, as most things in life go, things did not go as planned and the Redskins managed an 8-8 record and missed the playoffs. After the season Schottenheimer was ousted from his head coaching position and replaced by college coaching phenom Steve Spurrier.

Schottenheimer on the other hand moved on to another challenge, taking over the San Diego Chargers where he would try to turn around a team much as he had done with the Chiefs earlier in his career. In his first two seasons it seemed as though his magic had left him as the team went 8-8 and 4-12. With pressure on and fans calling for his firing, Schottenheimer made one of the biggest turn arounds of any football team in the history of the NFL going 12-4 and placing first in their division. For his efforts, Schottenheimer took the honor of NFL Coach of Year, but surely would have traded that in for a playoff win as his Chargers fell in the Wild Card round of the playoffs. His next big chance to redeem himself would unfortunately be his last. In 2006, Schottenheimer inspired a fantastically talented Chargers team to a 14-2 record, placing them atop the NFL and in the driver's seat to make the Super Bowl. There was no magic once again for Schottenheimer as the Chargers dropped their first game of the playoffs to the 2005 Super Bowl champions, the New England Patriots.

After the 2006 season, Marty Schottenheimer was relieved of his duties as San Diego's head coach and would later retire from the game that had treated him so well at times and terribly throughout the playoffs. The decision to fire Schottenheimer came after team president Dean Spanos gave these words as reported by ESPN.com's John Clayton on the day Schottenheimer was fired, "We have a dysfunctional situation here. Today I am resolving that situation once and for all." Schottenheimer would end his career with a playoff record of 5-13 while racking up exactly 200 wins during the regular season. His low win percentage in the playoffs has caused him be known by many as the best regular season coach never to make it to the Super Bowl.