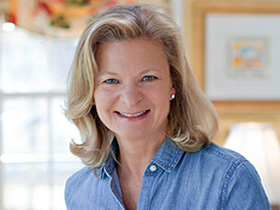 Lisa Scottoline uses her experience in the legal world for her fictional creations. Her second novel, Final Appeal, won the Edgar Allan Poe Award in 1994.

Native Philadelphia, Pennsylvania, mystery writer Lisa Scottoline was born in 1956. After earning a BA in English at the University of Pennsylvania, she went on to law school and then practiced law. During the late 1980s, she began writing stories and eventually published her first mystery novel, Everywhere That Mary Went (1993). Since then, her novels have been bestsellers sold and she earned an Edgar Award for Final Appeal (1994). At the time of this writing, Scottoline lives and writes in Philadelphia.

Her early professional career was entirely legal in nature. Scottoline became a clerk to Pennsylvania Superior Court Presiding Judge Edmund B. Spaeth. This experience provided her the opportunity to join the large Philadelphia law firm Dechert, Price & Rhoads as an associate. In 1986, however, she left the firm to raise her daughter and began a part-time career writing legal fiction. In 1994, she returned to the legal profession full-time as an administrative law clerk to a United States Court of Appeals judge.

In 1994, Scottoline completed her first novel, Everywhere That Mary Went, and sold it to HarperCollins Publishers. The book achieved success and she was nominated for an Edgar Award for Excellence in Mystery Writing. It also sold well, which was particularly rewarding given the financial privations Scottoline and her daughter underwent during its composition. The Mystery Writers of America presented the Edgar Award to Scottoline's second book, Final Appeal. Since that point, she has written twenty best-selling mystery novels, all of which are set in Philadelphia. She averages a book per year.Many of them revolve around the various partners of the all-female law firm of Rosato and Associates. All of her novels are known for having characters that readers can connect with. Janet Maslin, a New York Times reviewer, argues that Scottoline's books are "punchy, wise cracking thrillers," successfully incorporating "characters who are earthy, fun, and self-deprecating." Ultimately, Maslin credits Scottoline with having created "one of the best branded franchises in current crime writing."

Her 2009 book, Look Again, was named a Best Book of the Year by The Washington Post. Scottoline continues to receive many awards and honors for her best-selling books. She won the Fun, Fearless, Fiction Award by Cosmopolitan Magazine and Publisher's Weekly named her a PW Innovator. Additionally, Scottoline won AudioFile's Earphones Awards for both of her recent non-fiction works, Why My Third Husband Will Be A Dog and My Nest Isn't Empty, It Just Has More Closet Space. For the former, Scottoline also was named Voice of the Year for her recording of it. Furthermore, Scranton University has honored her with the Distinguished Author Award and WOmen in Business at the University of Pennsylvania have awarded her a "Paving the Way" award.

Scottoline is currently President of Mystery Writers of America. She is also the author of a weekly column for the Philadelphia Enquirer, entitled Chick Wit, which she co-writes with her daughter Francesca. She also currently reviews popular fiction and non-fiction for various newspapers, including The Washington Post, The Philadelphia Inquirer, and The New York Times. She also teaches a course called "Justice and Fiction" at the University of Pennsylvania, her alma mater. She continues to write, averaging a book per year. She currently resides in the Philadelphia area with her dogs.