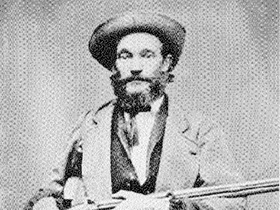 Outdoor writer and conservationist George Washington Sears was born in 1821 in Oxford Plains, Massachusetts but came to fame and lived most of his life in Wellsboro, Pennsylvania. He is most famous for his accounts published in Forest and Stream Magazine of three Adirondack voyages he made in the 1860s in featherweight canoes weighing less than 20 pounds. He was a pioneer conservationist and the author of outdoor manuals Woodcraft and Camping (1863). Sears died in 1890 in Wellsboro.

"Nessmuk" was the pen name of George Washington Sears, one of the most influential outdoor writers and pioneer conversationalists of the nineteenth century and perhaps the strangest canoeist of all time. Sears was a leading contributor to Forest and Stream Magazine in the 1880s, whose writings popularized ultralight canoeing and inspired thousands of self-guided Adirondack tours. His most famous works Woodcraft and Camping have since been combined and are still in print today. He was also one of the earliest and most outgoing environmentalists, and the effects of his pioneer efforts are still being felt today. He spiritedly defended the outdoors, writing in one of his letters that he had "a liking for adventure, intense love of nature in her wildest dress, and a strange fondness for being in deep forests by myself."

Sears was born in Oxford Plains, Massachusetts on December 2, 1821, the first of ten children. At the age of 8, he was sent away by his father to work at American Textile, but ran away and fell under the influence of a young Narragansett Indian named "Nessmuk," from whom his penname derived. Nessmuk taught Sears the life of the outdoors, including how to fish, hunt and camp. At 19, he began a career as a commercial fisherman and sailor, embarking on a whaling trip out of Cape Cod Bay for three years. Upon returning, he spent the next five years traveling the country, writing in his book Woodcraft and Camping that he "taught school in Ohio, bullwhacked across the Plains, mined silver in Colorado, edited a newspaper in Missouri, was a cowboy in Texas, a 'webfoot' in Oregon, and camped and hunted in the wilderness of Michigan" before settling down as a shoemaker in 1848 in Wellsboro, Pennsylvania where he would spend the rest of his life.

In Wellsboro, Sears began to build his reputation as an outdoor writer with perhaps his most famous writings being accounts of three Adirondack featherweight canoeing trips in the early 1880s. The accounts resulted in his 10-year association with Forest and Stream (later to be called Field and Stream). These voyages were made in featherweight canoes which have inspired the use of the same canoes today. The first canoe, the Nessmuk, weighed 17 pounds, 13 ounces on the 1880 cruise. The two successive canoes, the Susan Nipper in 1881 and the Sairy Gamp in 1883, weighed 16 pounds and 10 pounds respectively. Standard canoes of the day often weighed over 100 pounds, with a canoe today weighing anywhere between 67 and 80 pounds, with lightweight models bottoming out at around 50 pounds. Sears paddled and portaged 266 miles in each direction from Old Forge to Upper Saranac Lake each time. The 1883 trip took the 61-year old writer over a month to complete.

Sears advised his readers to "Go light; the lighter the better, so that you have the simplest material for health, comfort and enjoyment." He did so as a result of both his woodcraft philosophy as well as his own fragile stature, standing barely over five feet four inches tall and weighing about 110 pounds. Nessmuk described these cruises in 18 articles published in Forest and Stream and later published in 1962 as The Adirondack Letters of George Washington Sears Whose Pen Name was Nessmuk.

As age and illness began to slow down his adventuring, his output for Forest and Stream diminished. Sears returned to Wellsboro permanently in 1887, stricken with malaria as well as asthma and tuberculosis. By the spring of 1890, he was too weak to leave his house and died on May 1 of that year. Ignoring his requests that he be autopsied and his bones be placed "where the blessed sunlight can sometimes reach them," the readers of Forest and Stream helped fund a conventional burial and monument erected over his grave which can still be seen today.

Nessmuk's contributions to the world of woodcraft and conservationism are innumerable. One of the world's first conservationists, he repeatedly criticized Pennsylvania's lumbering practices, both for their negative effect on the trout populations and for their destruction of pine forests. He also joined in dozens of lawsuits against bark tanning and lumber companies and wrote hundreds of scathing letters, many of which are still in print.

The idea of lightweight canoeing still remains prominent today, with the term "Nessmuking" becoming synonymous with lightweight travel. The canoes and ideas of Nessmuk were carried on by many of his canoeing admirers. Legendary wooden canoe maker J.H. Rushton arranged with the U.S. Department of Agriculture in 1884 to have the Sairy Gamp shown at the Cotton Centennial in New Orleans and was later shown at the World's Columbian Exposition in Chicago in 1893. Guided lightweight canoeing tours are still available in the Adirondack region, and similar models of lightweight canoes can be found in many places throughout the country.

Sears was honored in 1927 when a mountain near Wellsboro was named after him, and most recently, Lake Nessmuk was created by damming a stream past the site of his longtime home. After spending nearly seventy years at the Smithsonian, the Sairy Gamp and Nessmuk canoes can now be seen on display at the Adirondack Museum in Blue Mountain Lake, New York, where they attract hundreds of thousands of visitors annually.