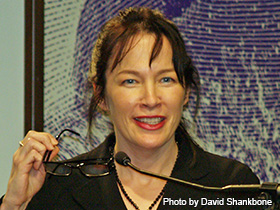 Author of Lucky (2002) and The Lovely Bones (1999), Alice Sebold spent her young adult life in Pennsylvania, where she attended Great Valley High School. The suburbs of Pennsylvania have appeared as the setting for some of her work.

Alice Sebold was born on September 6, 1963, in Madison, Wisconsin. She was an estranged second child of academic parents. Sebold's mother Jane and her father met on a blind date and had an immediate dislike for each other. As time passed, they eventually fell in love through her father's shy and dedicated courtship. Her father had a Ph.D. in Spanish Literature from Princeton and held his first academic job at Duke University in Durham, North Carolina. It was in Durham where Sebold's mother, alone all day and unable to make friends, began drinking secretly. She eventually became a full-blown alcoholic.

In 1977, Sebold's mother had been sober for ten years and began having what Alice and her sister called "flaps." During these times, when Sebold's father was away in Spain for months at a time, their mother became extremely anxious. While they were young, Sebold and her older sister Mary functioned as a caretaking unit of their mother. However, as time went on, Mary became less sympathetic and was often embarrassed by her mother in public when she would enter these panic attacks. Sebold was the one to compensate—soothing her mother and condemning her sister.

Her father's promotions moved their family to Madison, Wisconsin; Rockville, Maryland; and finally to Paoli, Pennsylvania. Here, her father taught Spanish at the University of Pennsylvania. As a teenager, Sebold described herself as "too smart, too fat, too loud, too arty," and said she often argued with her parents. The Sebolds were known to have fierce-table arguments about something as simple as the correct meaning of a word. She was proud to say, "I wanted to be the moron of the family, because morons seemed to have more fun, more freedom and more personality."

For all her uniqueness and creativity, she always wanted to be a writer. However, Sebold's parents focused all their attention and approval on their straight-A eldest daughter, Mary. Sebold graduated from Great Valley High School in Malvern, Pennsylvania, in 1980. Her father could not get her into the University of Pennsylvania where he taught, so Sebold attended Syracuse University in upstate New York in the fall of 1980. Here, a traumatic event occurred that would change Sebold's life forever and lead her to the bittersweet success of her career.

During her first semester at Syracuse, Sebold was raped in a tunnel leading to an amphitheater. She tried to fight off the rapist, who continually fought and beat her. Still a virgin, she was savagely raped, forced to kiss the man who then urinated on her and eventually left her to crawl away. A policeman later told her she was lucky as a few months earlier, another girl had been murdered and dismembered in the same tunnel. Sebold says that now she was enduring something her parents would never understand. She would one day write that, "I had changed. The world I lived in was not the world that my parents or Steve Carbonaro still occupied. In my world, I saw violence everywhere. It was not a song or a dream or a plot point."

Determined, Sebold stayed at Syracuse and enrolled in the creative-writing program and began to let out her anguish where she finished her bachelor's degree and studied writing. Here at Syracuse, she says, "I wrote tons of bad poetry about it and a couple of bad novels about it — lots of bad stuff. I felt the burden of trying to write a story that would encompass all rape victims' stories and that immediately killed the idea of this individual character in the novel. So [the novels] tended to be kind of fuzzy and bland, and I didn't want to make any political missteps." She also worked on the literary magazine, The Review, and was chosen editor her senior year.

A few months after the rape, she recognized her rapist while walking down a street near campus. She brought her rapist to court and secured his conviction. Her attacker is out of prison now, but Sebold says she has not kept track of where he is.

A decade after the rape, Sebold still found life difficult and her parents were of no avail, thinking it was all too much to handle. Eventually she ended up joining a troubled crowd in Manhattan, New York, and began experimenting with heroin. In New York, she became an adjunct professor at Hunter College. She said her students there had kept her alive by getting lost in their lives. She fit in with them as she had with no one else since her rape since many in her class were minority students who had gone through similar hardships.

After living in the city for ten years, she moved to California and became a caretaker of the Dorland Mountain Arts Colony. She earned only $386 a month and lived in a cabin in the woods without electricity. She then applied to graduate school at the University of California, Irvine.

At age 33, she began writing a novel called Monsters, a story about the rape and murder of a 14-year old girl. She became fascinated writing about everyday violence and her realization that "within the suburban world of my upbringing there was as many strange stories as there were in the more romanticized parts of the world." At Irvine, she met her husband Glen David Gold, the author of Carter Beats the Devil. He showed up late for class one day and would not take off his motorcycle helmet. Drawn to this particular gesture, Sebold began talking to him. They married in November, 2001. At Irvine, she wrote a novel about her own rape, a "misery memoir," titled Lucky. The title came from the policeman who told her she was lucky to be alive after her rape attack.

She then completed her novel Monsters and gave it to poet Wilton Barnhardt, her mentor, who was so impressed that he sent the manuscript to his agent (who is now Sebold's agent today) in New York. After more revisions, Monsters eventually became The Lovely Bones. In this novel, Susie Salmon, a 14-year old girl is raped and killed by a neighbor in the first chapter. Throughout the novel, Susie narrated the story of her death from heaven and describes her family's response to it.

The Lovely Bones has been described as the most successful novel since Gone with the Wind. In The Lovely Bones, Daniel Mendelsohn says in the New York Times, "Ms. Sebold [has] the ability to capture both the ordinary and the extraordinary, the banal and the horrific, in lyrical, unsentimental prose." Connie Ogle in the Houston Chronicle stated: "The Lovely Bones is a disturbing story, full of horror and confusion and deep, bone-weary sadness. And yet it reflects a moving, passionate interest in and love for ordinary life as it's most wonderful, and most awful, even at its most mundane."

Sebold says it was hard to get accustomed to this overnight success, given her modesty. In its fifth month after publication, The Lovely Bones had finally fallen to the second spot on the Times Bestseller list. She won the American Booksellers Association Book of the Year Award for Adult Fiction in 2003 and the Bram Stoker Award for First Novel in 2002.

Director Peter Jackson secured the book's film rights and began production of a film adaptation of the novel. In a 2005 interview, he said, "I don't want the tone or the mood to be different or lost in the film." Academy Award-winner Rachel Weisz and Mark Wahlberg will portray the parents of Susie, the Sebold character. Filming began in October, 2007 in Hatfield, Pennsylvania, and then continued filming in Holmes, Pennsylvania, at MacDade Mall. The production then moved to New Zealand. The film is scheduled for a 2009 release.

Sebold's second novel, Almost Noon, is about a suburban woman living in Pennsylvania who kills her elderly mother in a fit of rage. In this novel, Sebold admits to returning to her "obsessions" (the dark side of suburbia and of mother-daughter relations). This novel is literary fiction with a gothic twist. A sentence in the novel reads, "I saw my own epitaph: SHE LIVED SOMEONE ELSE'S LIFE." The untold story that Sebold wanted to tell in this novel was her mother's. Throughout her life, Sebold's mother too wanted to pursue a career in writing and poetry. This mother-daughter psychodrama, Sebold says, is framed in her mind and thought of this bad relationship as the topic of her novel.

In the end of her misery memoir Lucky, Sebold leaves her readers with a sense of sadness of how she, at only 18, experienced a horrific tragedy and will continue to live the rest of her life in agony, constantly desiring normalcy. "But it was later now, and I live in a world where the two truths coexist; where both hell and hope lie in the palm of my hand."
?ö

Photo Credit: David Shankbone. "Alice Sebold in New York City. The photographer dedicates this photograph to Daniel Case, who requested it for Ms. Sebold's Wikipedia article, for his many improvements to the Wikipedia project." 1 October 2007. Photograph. Licensed under CC BY-SA 3.0. Cropped to 4x3. Source: Wikipedia Commons.