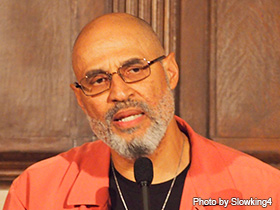 Born in Philadelphia, Pennsylvania in 1955, Tim Seibles graduated with a BA in English from Southern Methodist University in 1977. He later earned his MFA in Creative Writing from Vermont College. He has published multiple collections of poetry that often address social issues, such as race and sexuality, as well as personal identity. At the time of this writing, Seibles lives in Virginia, where he is as a Professor of English and Creative Writing in the MFA Program of Old Dominion University.

Tim Seibles was born in Philadelphia, Pennsylvania, in 1955. His father, Thomas Seibles, was a biochemist for the Department of Agriculture, while his mother, Barbara, was a high school English teacher. Seibles credits his mother for instilling a love of reading and writing in him by encouraging his efforts in these subjects from an early age. From that young age, Seibles began to develop an interest in Greek and Roman mythology, as well as an interest in science fiction literature. Seibles was also an avid football player—having said himself that he would "play pro football and in the offseason write novels." Although he did not become a professional athlete, several of his poems reference football and other sports.

In 1973, Seibles enrolled at Southern Methodist University in Dallas, Texas, to participate in the football program. While football remained important to him, it was the first of several writing courses he took there that would direct the rest of his college career. These courses exposed Seibles to poets of various racial and social backgrounds, such as James Tate, Sylvia Plath, Michael Harper, and Rita Dove. Being exposed to a diverse world of poetry has, in his eyes, provided him with a greater understanding of the art. During that time, Seibles studied under poet Michael Ryan, who showed that "writing was a way to talk back to life." Reflecting on these courses, Seibles shares, "I was easily convinced that writing was something I could and should do forever."

Upon graduating from Southern Methodist University in 1977 with a BA in English, Seibles went on to become a high school English teacher. Seibles taught in the Dallas area for the next decade, until he decided to pursue writing fulltime. To fulfill this pursuit, he enrolled in the MFA in Creative Writing program at Vermont College in 1988. In that same year, Seibles' first poetry collection, Body Moves, was published — described by Barbara Hoffert of Library Journal as "an accessible yet thoughtful work." The collection deals with memory, sexuality, and at times, somewhat political matters. Two years later, Seibles graduated from Vermont College in 1990.

Shortly after earning his MFA, Seibles was awarded a writing fellowship from the Fine Arts Work Center in Provincetown, Massachusetts—an experience that gave him the opportunity to live on Cape Cod. Living in this environment allowed Seibles to focus solely upon his poetry. During this time, Seibles completed his second collection of poetry, Hurdy-Gurdy, which was published in 1992. This collection, much like Body Moves, aims to address issues dealing with sexuality, memory, and larger society. Critically acclaimed writer Sandra Cisneros said of the collection:

"This is not poetry of the highfalutin violin nor the somber cello, but a melody you heard somewhere that followed you home. Elegant and silly, irreverent, fun and funny, Tim Seibles' poetry celebrates the spirit's little moments of holy joy."

After serving as the Writing Coordinator at the Fine Arts Work Center for two years following his fellowship, Seibles spent a year in Cambridge, Massachusetts, to focus on his writing and poetry. Seibles then returned to education, becoming a Professor of English and Creative Writing in the MFA program at Old Dominion University in Norfolk, Virginia.

Following the publication of his chapbook, Kerosene (1995), Seibles published his third full-length collection, Hammerlock (1999). Seibles himself describes the poems found in this collection as ones dealing with socio-political concerns along with issues of race, identity, and manhood. While differing slightly in subject matter, the poems do not deviate in tone, as they maintain an element of fun within their uniquely keen construction. Novelist Reginald McKnight commented on the collection: "A houseful of voices speaks through him in language so tenable, you'll at times feel bruised, at times made love to. I read a lot of poetry. I've never read poetry like this."

In 2004, Seibles published Buffalo Head Solos, his fourth full-length poetry collection. It covers topics ranging from religion and politics, to love and cultural heritage. The collection stood out, in part, with each of its four sections introduced with a poem from the perspective of a cow, a mosquito, a human, and a virus.

On writing in each of these points of view—a style which Seibles defines as "persona poems"—he commented, "It allows you to escape your own tired habits, to see in a way that you hadn't considered." This writing is perhaps best found in the poems "Ambition," featured at the beginning of every section. Each of these poems takes on a new persona. In one of the "Ambition" poems, Seibles writes:

But I sense some chronic

some ongoing agitation from you hemoglobes.

My family and me are small things

tryin' a quench a thirst. It's our nature.

The random violence is really

uncalled for. The bashing, the swatting...

Writer Joey Rubin describes the poems as "rendered equally true-to-life, capturing the voice of an underdog or an outcast, each in his own way longing for strength, validity, and power. They are funny (you can't help but laugh when the mosquito exclaims: "What? You think we ain't/ got feelings?!"), but these poems are not jokes." Seibles has been honored with the Open Voice Award for poetry from The National Writer's Voice Project.

In addition to poetry collections, he has contributed over a dozen chapters or articles to anthologies and journals and has participated in nearly 80 public presentations, readings, and panels. Selected journals in which his work has appeared include New England Review, Ploughshares, and Black American Literary Forum; anthologies featuring his work include In Search of Color Everywhere and New American Poets in the 90's. Seibles has also led workshops for the Cave Canem Writers Retreat and the Hurston/Wright Foundation, among other venues.

While at Old Dominion University, Seibles served as the director of the university's Annual Literary Festival four times (1997, 1998, 2004, and 2006). He enjoyed this role, having described himself as "deeply committed to the arts." In 2010, he served as Bucknell University's Poet-in-Residence.

His poem, "Harvest Moon," from Buffalo Head Solos, was selected by the Public Poetry Project of the Pennsylvania Center for the Book in 2011.

Fast Animal (2012), his newest collection, was selected as a National Book Award Finalist and publisher Etruscan Press states that the collection "threads the journey from youthful innocence to the whittled-hard awareness of adulthood. Along the way it immerses the reader in palpable moments—the importance of remembering, the burden of race, and the meaning of true wakefulness."

Seibles lives in eastern Virginia, where he continues to teach as a professor in the MFA Program at Old Dominion University.