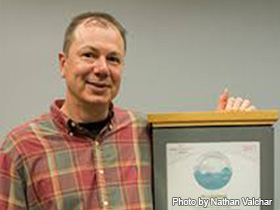 Fred Shaw is a Pittsburgh poet known for his restaurant-inspired collection, Argot.

Fred Shaw is a poet who graduated from the University of Pittsburgh and earned his MFA from Carlow University. His collection Argot features poems inspired by his years in the restaurant industry, as well as by his family and his experiences as a teenager. The poem "Scraping Away," from his collection Argot, was selected for publication by the Public Poetry Project of the Pennsylvania Center for the Book in 2017. Shaw has taught writing and literature at Point Park University and Carlow University and, at the time of this writing, reviews books for the Pittsburgh City Paper.

Fred Shaw is a graduate of the University of Pittsburgh and earned his MFA from Carlow University. He says his poetry features "restaurant-related poems."

For example, "Scraping Away" — from his collection Argot and selected for publication by the Public Poetry Project of the Pennsylvania Center for the Book in 2017 — is about a scallop; one a professor challenged him to write about during his MFA defense. "I offhandedly mentioned that the first time I had ever eaten a sea scallop, it had fallen on the floor," he tells Prosody Radio host Jan Beatty. Three-to-four years and 100 revisions later, the final poem came to fruition.

This and other restaurant-inspired poems are collected in Argot, a title that refers to "a specialized language, much the way jazz musicians will speak to each other or restaurant employees as well," Shaw explains. "[A] language [used] on the job." The challenges of writing such poems include an abundance of content, mixed with some expletives. "[It's] hard to cut it down, there's so much to say... [and] often there's salty language going on." Kristofer Collins of Pittsburgh Magazine considers this work-life language just as telling as a uniform one may wear, and says, "...in these poems the workaday speech of line cooks and dishwashers is the signature sound."

The collection also addresses a few teenage misadventures and familial relationships. During his reading at the 2017 Public Poetry Project event, Shaw shared that "Argot," the title poem, "is for my mom, who has been a big influence on me, helped me to understand what hard work was and that it's not always glamorous, but it's the thing that is gonna get the next meal on the table." Other poems, such as "Thirteen Steps," are dedicated to his late father.

Both of his parents emphasized the importance of reading and literacy during his childhood. When he went on to study at the University of Pittsburgh, he had begun with geology classes, but eventually switched to creative writing. "I was tired of chemistry classes," he writes in the anthology Shaking Intensified. Listening to Jim Carroll read his work convinced Shaw that "poets were much cooler than rock stars." His other influences include Ted Kooser and Charles Bukowski, among others. He read closely to develop a strong sense of narrative in his own work.

Now a teacher himself, Shaw has led classes in writing and literature at Point Park University and Carlow University in Pittsburgh. At the time of this writing, he also reviews books for the Pittsburgh City Paper and maintains an ongoing career in the restaurant industry, which he has for over 25 years. Fred Shaw and his wife, as this time, are residents of Ross Township.

His former student Alexa Kennedy says: "Intro to Prose with Fred Shaw has been my favorite course... [T]he material and advice he gave during class has redirected not only my career path, but my habits as a student and person. ... A professor who causes you to question more than the writing prompt is invaluable."