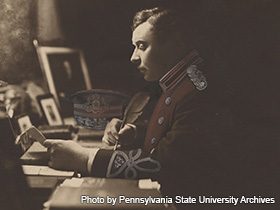 Henry W. Shoemaker, a prolific chronicler of Pennsylvania history and folklore, was designated as the first state folklorist in 1948.

Born in 1880, Henry Wharton Shoemaker was exposed to nature at a young age by his uncle. He eventually became a folklorist about nature in Pennsylvania. He is believed to be one of the first in the United States.

Henry Wharton Shoemaker was born in the year 1880 in New York City to Henry Francis and Blanche (Quiggle) Shoemaker. He was the oldest of three children. Shoemaker's uncle, James Quiggle, invited and encouraged Henry to join him at his residence at Restless Oaks in McElhattan, Pennsylvania. It was the forested areas of Restless Oaks where Henry's fascination with collecting animals inspired him to record the folklore of Pennsylvania. Shoemaker's early education consisted of private tutors until he attended Dr. E. D. Lyons Classical School in 1889. At this school, he learned about nature and its history. Besides nature, he had a love for sports. His scrapbooks and his first publishing venture, Argyle News, were devoted to sports, including camping, football, golf, and track. The Argyle News was a prep school newspaper that Henry's brother, William, managed and Henry edited. It was a monthly periodical dedicated to the coverage of schoolboy athletics.

In 1896, Shoemaker graduated from Dr. E. D. Lyons Classical School and enrolled in Columbia University the following year. Shoemaker became active in many of the school's organizations, including the Auto Club (which he became the first president of), the Aero Club (which he formed), the track team (which he managed), the Tennis Club (which he directed), the Columbia Spectator (which he edited and was the assistant manager of), and the Columbia Jester (which he managed and was staff writer of). While doing all of this, Henry also was able to fit in his volunteer work with the Republican County Committee and fulfill his role as class treasurer (voted in by his fellow students). His first mainstream-published works came about while he was in college. At the age of 18, Shoemaker published his first volume of poetry based on his work with the Argyle News. From Lancaster to Clearfield, or Scenes on the By-ways of Pennsylvania (1900), his first book of prose, was published two years later. He entered the armed services during World War I and took a break from writing poetry.

Shoemaker used folklore to find the spirituality in Pennsylvania's natural history. His idea was that folklore could be used to counteract the effects of the vanishing wilderness due to the changes caused by industrialization. He felt that folklores did not take the validity away from history; rather they captured many memories and mysteries that held various truths to the people. Shoemaker would become the first official folklorist in the United States in 1948. He found that prose was more successful than poetry with readers as well and so he maintained a lifelong membership with the Pennsylvania Poetry Society because of his immense love for it.

On July 14, 1958, Shoemaker had a second heart attack in his riverside home in Harrisburg, Pennsylvania. After being rushed to the hospital, he died the next morning. His funeral took place half a year later on February 18 at Highland Cemetery in Lock Haven, Pennsylvania. His headstone was placed overlooking the west branch of the Susquehanna River and the Bald Eagle Mountains, two of his favorite places.