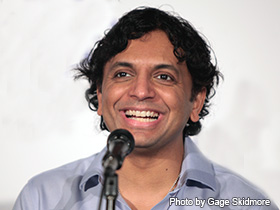 M. Night Shyamalan, born Manoj Nelliyattu Shyamalan in Pondicherry, India, later emigrated to the affluent Philadelphia suburb of Penn Valley. Shyamalan developed an early passion for filmmaking when he was given a Super-8 camera at the age of eight. At 12, he saw Steven Spielberg's Raiders of the Lost Ark. Impressed by the film's spiritual themes, he decided to make spooky suspenseful films as a livelihood. By the time he was 17, Shyamalan had made 45 home movies. Shyamalan attended New York University's Tisch School of the Arts. Most accounts report that his middle name, Night, was created while attending the Tisch School, as well as where he began to develop his own style of cinematography.

Praying with Anger was loosely based on his trip back to India. Shyamalan raised all of the necessary funds for this project, a film that he directed and produced. Wide Awake, the second film that he wrote and directed, was partially shot in the Philadelphia-area Catholic school that he attended as a child, with additional scenes shot at Bryn Mawr College. Despite being distributed by Miramax Films, Wide Awake was one of 1998's lowest-grossing films.

Shyamalan's next project, The Sixth Sense, found success both critically and commercially in 1999. A supernatural thriller about a young boy (Haley Joel Osment) who is able to communicate with the dead, the film was a sleeper hit and gave Shyamalan his career breakthrough. The Sixth Sense featured a talented cast of performers and a twist ending, generating incredible word-of-mouth to become the must-see film of that summer and fall. As a result, the film received one Golden Globe and six Oscar nominations, including nods for Shyamalan's script and direction. The film additionally won Bram Stoker, Golden Satellite, and Nebula Awards for best original screenplay and an Empire Award for best director. That same year, he enjoyed further success as the screenwriter for Stuart Little, earning acclaim for his intelligent, witty script.

After the success of The Sixth Sense, Shyamalan directed another supernatural thriller, Unbreakable, containing the same structure and theme as a comic book. Shyamalan recast Bruce Willis (The Sixth Sense) as a man who suffers mysterious changes following a train accident. Released in 2000, the low-key thriller received mixed critical reviews and a healthy, yet brief, box-office run. Unbreakable retained much of The Sixth Sense's artful direction, though its mediocre reception made Shyamalan hesitant to develop the film as the first in a trilogy, as originally planned.

In 2000, he won a Visionary Award for his outstanding contributions to the arts. Shortly thereafter, he was approached by producer Frank Marshall to write the fourth chapter in the Indiana Jones adventures. Shyamalan politely rejected the offer, citing his reluctance to embark on a joint project with Harrison Ford, George Lucas, and Steven Spielberg. Additionally, he then turned down an offer to direct the third film in J. K. Rowling's Harry Potter series.

Instead, Shyamalan began work on a new project—a screenplay about a rural family that discovers crop circles on their farm. The film, Signs, was sold to Disney for a record $5 million in April 2001, making Shyamalan the highest paid screenwriter in Hollywood. Although the role of the family patriarch was originally meant for someone older, Shyamalan made a few minor changes when Mel Gibson showed interest in starring in the film. When asked to describe Signs, Shyamalan reflected that "I think I take what you might call a B-movie story, deal with B-movie subjects, and I treat it as if it's an A-movie in terms of my approach, my crew, my actors, my ethics and so on. I guess that's my trademark or one of them anyway!" That same year, Shyamalan won a FirstGlance Award, given to a Philadelphian who has made a difference in Hollywood. In addition, he won an Episcopal Academy Distinguished Alumni Award from the private academy that he attended in his youth.

Shyamalan's next film, The Village, explored the fear of the unknown. Set in a self-made utopia, a community coexisted with a race of fantastical creatures living in the surrounding woods. These creatures were devised to keep the characters apart from the rest of society, never to acknowledge the existence of the "other" outside the village perimeter. "When you say fear of the unknown, that is the definition of fear; fear is the unknown, fear is what you do not know, and it's genetically within us so that we feel safe," said Shyamalan. When asked if he was conscious of fans expecting a surprise twist in his films, Shyamalan replied, "The surprise for me is, I didn't have it in the last movie [Signs], and people think I did.... The negative thing about the twist is that it's all people are occupied with; all the gentleness in the movie is being overshadowed by the flashy cousin in the sequined vest taking center-stage." The Village debuted at #1 its opening weekend, despite mixed reviews.

Shyamalan currently lives with his wife, Bhavna, and two children in the Philadelphia suburb of Wayne, Pennsylvania. His parents, wife, and nine other family members hold M.D.s and/or Ph.D.s.