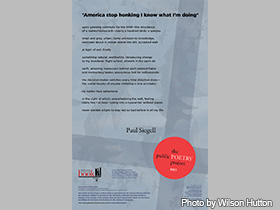 Paul Siegell was born in Long Island, New York, and earned his undergraduate degree from the University of Pittsburgh, where as a sophomore he realized he was becoming a poet. He has since written books of poetry, including Poemergency Room (2008) and Take Out Deliver (2018), and is known for constructing visual artwork with his poems. At the time of this writing, Siegell lives in Philadelphia, Pennsylvania, where he is Associated Director of Copywriting at Philadelphia Media Network; writes and edits for The Philadelphia Inquirer, Daily News, and Philly.com; and serves as a Senior Editor for Painted Bride Quarterly.

Paul Siegell, born August 28, 1977, in Long Island, New York, is a poet dedicated to "creating an eyeful for the mind." He tells Chris Urie of Geekadelphia.com that it was during a poetry lesson in 5th grade when he first discovered the appeal of concrete poetry, defined by the Poetry Foundation as verse that emphasizes nonlinguistic elements in its meaning, e.g. a typeface that creates a visual image.

"[The other kids were] scribbling away... and I was sitting there waiting for recess," Siegell recalls his teacher's assignment to write a poem. "Mrs. Grossman came over, sat with and asked me to name an animal. Last name's Siegell so I said bird. 'Good,' she said. 'Now fill the page with the outline of a bird.' I drew a bird. Then she goes, 'Write in as many kinds of birds as you can think of, all the way around your drawing.' So I did. When I was done she said, 'Now erase the line.'"

Urie describes Siegell as "one of the few people able to distill emotion into the very finest visual representation." Margaret Bashaar of Weave Magazine adds to that "high level energy" as a description of Siegell's work: "Siegell bounces from word to word, line to line with a fantastic momentum. ...and this momentum often manifests in repetition emphasized by italics or capital letters. His poetry feels as though it almost literally pulls you from one line to the next, from one poem to another."

It was during Seigell's undergraduate studies at the University of Pittsburgh (Pitt) when he realized he was a poet and began work on jambandbootleg (2009), a collection that mimics the performance and improvisational elements of jam bands like Phish, according to Gregory Lawless, author of the blog I Thought I Was New Here: poems and whatnot. "The first poem I ever wrote was after an NYE-run of PHiSH shows my sophomore year," Siegell says.

In his post-sophomore year at Pitt, 1996, his interest in poetry transitioned to serious writing, he tells Urie: "I was reading things like Dickens' Great Expectations, rereading Ginsberg's Howl, spinning Phish and Dead bootlegs on cassette, and writing about live music — and live-music lovers — until 4 in the morning, crashing, then waking up all way on the other side at 4PM... Editing, revising, deleting great chunks. Teaching myself how to launch into meaning through rhythm and imagery. Finally having something to do, I fell madly in love. I had something to work on. I had a purpose. I had Purpose.

Siegell has said he often finds inspiration in the throes of live music events. "Concerts move me. ... [O]n good nights, as my body releases into a riot of excitement, I start hearing things in my head. The performance of expression. The created crowd. The historical connection. Inspiration in the hetty, sweaty deliciousness."

While drafts of poems for jambandbootleg kicked off his poetry-writing focus, Siegell's first published collection is Poemergency Room (2008), which also draws on concert-going experiences, in addition to a variety of subjects, including musings on a high school gym class, written in the shape of a flexed runner, in "Antibiotics" and a study on writer-reader interplay rendered in the puzzle-like form of "the chill soar." Poemergency Room is "full of short statements, fancy line-work, and carmen figuratum or shape poems," says Bashaar. "The language is a mix of the high and low cultures, making a pop culture reference juxtaposed with a literary one."

Via his website ReVeLeR @ eYeLeVeL (http://paulsiegell.blogspot.com/), which Jamandonline's Arial Rosemberg deems one of the "30 Awesome Poetry Blogs You Aren't Reading Yet," Siegell even sells his striking work on graphic t-shirts. In conversation with Urie, however, he is adamant about not considering himself a graphic designer. Siegell — who at the time of this writing is Associated Director of Copywriting at Philadelphia Media Network; writes and edits for The Philadelphia Inquirer, Daily News, and Philly.com; and serves as a Senior Editor for Painted Bride Quarterly — has over 10 years of experience working with graphic designers. "I've far too much respect for what they do to call myself a graphic designer. I'm just writing poems, and some just look funkier than others."

First and foremost, Siegell's goal is for his work to succeed within its intended genre. "It's gotta be a poem," he tells Lawless. "[A]nd hopefully a Poem, before it can be anything else. The layout can come later that day or sometimes years later. At some point the poem goes to me, 'Yo dude, I don't look like this.' And so I listen."

Siegell's third collection, wild life rifle fire, is simultaneously a collection of poems and a singular poem, according to Urie. While his 2018 collection, Take Out Delivery, is ...shaped and swarmed by a thicket of allusions, from literary giants Stein and O'Hara to denizens of the Philadelphia poetry scene, '90s grunge music, and a Meow Mix jingle; and insistently grounded in luminous edges of the relational city..., as described by poet Julia Bloch. Siegell's work regularly appears in literary journals and has been featured in publications such as American Poetry Review, Black Warrior Review, Coconut, and Rattle.

His poem, "America stop honking I know what I'm doing," from Poemergency Room, was selected for publication by the Public Poetry Project of the Pennsylvania Center for the Book in 2015.

At the time of this writing, Paul Siegell lives in Philadelphia, Pennsylvania, and says in conversation with Urie that he is most astonished when people tell him that reading his poetry makes them feel like they are at a concert.

"Here's my deal," he tells Lawless. "I'm MFA-less ...and I should really know more about theory/traditions. ... What I know is the propulsion of instinct. ... When the reader feels it, the leap, from my work, that's miraculous and I'm grateful."