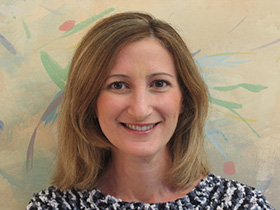 Born in in Philadelphia, Pennsylvania, on April 24, 1959, Sharon Hernes Silverman is the author of numerous Pennsylvania travel books and guides for crocheting. At the time of this writing, Silverman resides in West Chester, Pennsylvania.

Sharon Hernes Silverman was born to Clara and Seymour Hernes on April 24, 1959, in Philadelphia, Pennsylvania. Silverman was a very creative child who enjoyed arts and crafts, a passion that her mother fostered and celebrated. Crucial to Silverman’s later calling, her mother taught her to crochet when Silverman was around five years old, and she took to the craft eagerly. She graduated from Abington High School and then attended the University of Pennsylvania starting in 1977, graduating with an English BA as well as minors in biology and chemistry in 1981.

At first, Silverman’s career trajectory headed solidly for the STEM fields, specifically veterinary practice. She held several assistant positions in research labs during her college years before her direction pivoted towards scientific writing. After graduation, Silverman received a position as Acquisitions Editor for the Institute of Scientific Information. Around this time, she left the veterinary practice in favor of pursuing technical writing.

Silverman left the Institute of Scientific Information in 1983, was hired as a technical writer for Shared Medical Systems that same year, and then switched once again when she was hired by DuPont for the same vocation. She also began taking business courses at Villanova University in 1984, and soon became Editor of the Villanova Journal of Commerce and Finance.

Silverman’s career shifted away from STEM fields entirely when she began work as a freelance travel writer. These writings mostly focus on travel within the United States, though she has works centered outside of the country, as well. These works include a regular column for The Hunt magazine, a column for Maryland Magazine titled “At the Inn,” and a Denver Post article about the Hawaiian island of Niihau that won a Hawaii Visitors Bureau travel writing award in 1992.

In 1988, Silverman left her position at DuPont and began freelance writing full-time, leaving her technical writing days behind. She continued to write travel columns and hundreds of other pieces for hundreds of North American publications, ranging from restaurant reviews to travel guides, to commentary pieces and advice columns. Her career would take another sharp turn, however, when an editor asked her whether she had any background in arts and crafts, as the publisher in question was beginning a how-to instructional book series.

Silverman’s childhood passion for crochet resurfaced while working on these instructional books. By the time the first book in the series, Basic Crocheting: All the Skills and Tools You Need to Get Started (2006), was published, Silverman had found the niche she wanted to fill. When practicing the how-to steps to write the book, she had found most instructional crocheting resources were confusing, so her goal became publishing crochet tutorials that the reader could easily follow.

Since this first book series, Silverman has continued to foster a glowing reputation in the crocheting world. Of her over two dozen books (as of now), nearly half are crocheting books. She also has over 200 crochet patterns and designs available for sale online. Silverman has provided large-scale crochet installations to several museums, and has taught crocheting classes both at local venues and at national conventions.

At the time of this writing, she and her husband, Alan B. Silverman, live with their two sons in West Chester, Pennsylvania, where she continues to create and publish accessible and fashionable crochet patterns.