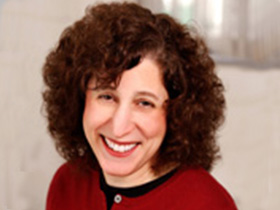 Born in 1959, Rachel Simon had a turmoil-filled childhood. She spent the end of her childhood and young adult years struggling with her parents’ divorce and her mother's abandonment. These struggles served as topics for her books in indirect ways. After studying at Bryn Mawr College, she wrote Riding the Bus with My Sister (2002)‚ a memoir that documents the time she spent with her sister Beth, who has an intellectual disability. This book brought her public recognition as a literary figure, and she became even more widely known following its film adaptation.

Rachel Simon was born in 1959, in Newark, New Jersey, and moved to many different towns in her youth. She was the second child of four and spent much of her childhood writing and sharing short stories with her friends. When Simon was eight years old, her parents divorced after her father began a relationship with a colleague. Years later, when her mother married an abusive con artist, Simon and two of her siblings moved out, while her one sister, Beth, stayed. Eventually, Beth came to live with Simon and their father, too, causing a falling-out between Simon and her mother. This rift in her family and related struggles underpin the topics of some of Simon’s books.

Simon attended Solebury School, a boarding school in New Hope, Pennsylvania, starting at age 16. She then studied anthropology at Bryn Mawr College. After graduating in 1981, Simon worked in various jobs, including paralegal, administrative assistant, and research supervisor for a television study. At 26 years old she enrolled in a graduate program for creative writing at Sarah Lawrence College. After earning her degree in creative writing, Simon taught private creative writing classes. Later, she took a job coordinating literary events at a Barnes & Noble in Princeton, New Jersey. She also wrote commentaries in The Philadelphia Inquirer.

Simon’s first widely published work, a short story collection titled Little Nightmares, Little Dreams, debuted in 1990 and established her authorial voice and penchant for dark humor. Most of the stories in the collection were steeped in grim humor while addressing serious issues, often involving death and loss. Her next work, a book titled The Magic Touch (1994), is about a woman who heals "the spiritually and physically wounded through sex," as described by the New York Times. After the woman realizes her gift, she sets out to save lost souls. The Magic Touch isn't just an adult fairy tale; it also includes satire of real life with characters (who share resemblances to Dan Quayle and serial killer, John Wayne Gacy) and theological contemplation of whether God and the devil really exist. Certain stories from this collection have been adapted for local theater throughout the years.

A couple years later, Simon wrote The Writer's Survival Guide (1997). Unfortunately, the book didn't become very well-known, and it would be many years before Simon published again. Simon’s writing career continued in the form of her freelance work. During this time, Simon would also marry her husband, Hal, in 2001.

Simon’s most lauded and recognized piece is arguably Riding the Bus with My Sister, a memoir published in 2002. It describes the events of one year that Simon spent riding the public buses of Reading, Pennsylvania, with her sister, Beth. Beth, who has an intellectual disability, had decided years before this to spend her days on the public buses with the drivers and passengers, instead of looking for a job like her family had wanted. Simon was inspired by this experience to write a novel about her life and the struggles she encountered learning to understand Beth’s point of view. Riding the Bus with My Sister switches between the events that take place throughout the year and Simon's family's past. Simon covers the many troubling events in her life and uses these to try and explain how she became who she is. The novel went on to win the School Library Journal Best Nonfiction Award and the Before Columbus Foundation American Book Award. Riding the Bus with My Sister was also adapted into a Hallmark movie starring Rosie O'Donnell and Andie MacDowell.

Though Simon continued to write fiction and memoirs after the publication of Riding the Bus with My Sister, she also became a widely sought-after guest speaker. She has taken on an active role in boosting and respecting the stories and perspectives of those with disabilities, and often speaks on how to be more accepting and open to others. The largest change in her life since Riding the Bus with My Sister was her renewed relationship with her sister, Beth; far from the tension that preceded the events in the book, Beth is now one of the most important people in Simon’s life.

In 2009, Simon published another personal memoir, Building a Home with my Husband. After being victims of a burglary, Simon and her husband were confronted with the prospect of either moving or renovating. The couple decided on the latter option, resulting in this surprisingly profound reflection on many of Simon’s personal relationships. Not only does the memoir look in-depth at her marriage, but also at her friendships and familial ties, especially those to her mother, who now struggles with Alzheimer’s.

Another critically acclaimed work of Simon’s is her 2011 novel The Story of Beautiful Girl. The novel stars two lovers with disabilities who meet in a hospital ward in the 1960s. A critical and revealing look at the way society has treated people with disabilities, the story brings to light the barriers that people with disabilities climbed to live happily and serves to expose and analyze preconceived notions about disability. The book was a New York Times bestseller and has been widely praised.

Rachel Simon continues to teach creative writing classes both privately and at Bryn Mawr College at the time of this writing. She also continues to write a commentary for the Philadelphia Inquirer, though she is now a resident of Delaware.