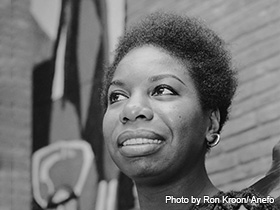 Famed Jazz singer Simone spent much of her life in and around Philadelphia.

Eunice Kathleen Waymon (Nina Simone) was born in Tryon, North Carolina, on February 21, 1933. Nina Simone was a renowned jazz singer. She recorded several albums, some of which were not intended for release. After performing "I Loves You, Porgy" from the jazz opera Porgy and Bess at a Philadelphia, Pennsylvania nightclub, Simone became a star. She later performed at Town Hall, Carnegie Hall, and at the Newport Jazz Festival. She studied at the Julliard School of Music and has since released many CDs and LPs. On April 21, 2003, she died at her home in France after a long illness.

The sixth of seven children, Nina Simone was born Eunice Kathleen Waymon in Tryon, North Carolina, on February 21, 1933. Her family was very poor and struggled to make ends meet. Some time later, Simone's family moved to Philadelphia, Pennsylvania. Simone played the piano all her life. When she was a teenager, she even took a job teaching other kids how to play, giving the money she earned to her parents. In 1954, Simone was offered a job playing piano at the Midtown Bar and Grill in Atlantic City, New Jersey. She took the job, adopting a stage name because she did not want her parents to find out that she was playing in a bar. She had earned the nickname "Niña," which is Spanish for little one, and was quite fond of the French actress Simone Signoret, so she coined the name Nina Simone. Simone graduated high school as valedictorian of her class, earning a one-year scholarship to the Julliard School of Music in New York. She studied at Julliard for a year, hoping it would help her prepare for the scholarship exam to the Curtis Institute of Music in Philadelphia, where she had longed to study music. Simone returned to Philadelphia to visit her family, and while she was there she decided to take the exam at the Curtis Institute of Music. When she was rejected, Simone was convinced it was due to the color of her skin. Simone then decided she would make a difference; she was determined to become the first African American classical concert pianist.

In 1956, Simone earned money to pay for school by working as a pianist and a singer, playing in clubs throughout Philadelphia and New York. Pooquesin was an upscale nightclub in Philadelphia, and it was an improvement from her Atlantic City jobs. Her performances earned her enough recognition that soon Simone was recording her own songs. In the late 1950s, she recorded her first songs for the Bethlehem record label. The album, Little Girl Blue, was released in 1958. Her first single off that album, "I Loves You, Porgy," from the jazz opera Porgy and Bess, was an instant hit. In 1958, Nina married Don Ross, a white man she met playing at a club in Philadelphia. By the end of 1959, she realized that she had made a mistake, packed her things, and moved out.

Not long after, Colpix—a Columbia Pictures Record label—offered Nina a long-term contract, which she signed in April 1959. Her first album for Colpix was titled The Amazing Nina Simone. Shortly after, Bethlehem released another album of songs that they had decided not to use for her first album Little Girl Blue. Since Simone was no longer under contract with the label, there was nothing she could do about it. In 1960, Simone married Andy Stroud, a former police detective who later became Simone's recording agent. Together they had a daughter, Lisa Celeste Stroud, the star of the Broadway play Aida and the voice of Nala in Walt Disney's The Lion King. Fed up with record companies, feeling manipulated by show business, and feeling abused by racism, Simone left the United States for Barbados in 1974. During the years that followed she lived in Liberia, Switzerland, Paris, the Netherlands, and finally the south of France.

During her travels, Simone collaborated with Stephen Cleary to write her life's story, The Autobiography of Nina Simone: I Put A Spell On You, which was published in 1991 by Pantheon Books. She was the highlight of the Nice Jazz Festival in France in 1997 and the Thessalonica Jazz Festival in Greece in 1998. On October 7, 1999, Simone received the Lifetime Achievement in Music Award in Dublin, Ireland. In June 2000, she received the Diamond Award for Excellence in Music from the Association of African American Music in Philadelphia. Simone released many albums over the years, earning the nickname "High Priestess of Soul" from her fans. She is also very well known for Civil Rights songs such as "Why? The King of Love is Dead," which captured the tragedy of Martin Luther King. Her last album, Live at Ronnie Scott's, was released with Meteor Records in 1999.

Simone passed away on April 21, 2003, at her home in Carry-le-Rouet, France, after a long illness. Her ashes were spread across Africa in honor of her last request. Two days before her death, The Curtis Institute of Philadelphia named Simone an Honorary Doctor in Music and Humanities. Her daughter Lisa Celeste Stroud and her three children survive Simone. After her mother's death, Stroud started a non-profit organization called The Nina Simone Foundation to celebrate her mother's music and many accomplishments.