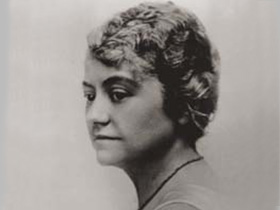 Elsie Singmaster was born in 1879 in Schuylkill Haven. This novelist and children's book writer would be most closely associated with the town of Macungie in Lehigh County. A great number of her 42 books concerned the Pennsylvania Germans and presenting them in a fair light. Singmaster would receive the "Distinguished Daughter of Pennsylvania" award in her latter years in recognition of her contributions to Pennsylvania's heritage. Singmaster died in 1958.

Born in Schuylkill Haven, Pennsylvania, on August 29, 1879, Elsie Singmaster Lewars was the daughter of the Rev. John Alden Singmaster and Caroline Hoopes Singmaster. Moving to Macungie in 1882 because of her father, she received a small amount of public schooling where her teacher only spoke Pennsylvania German. Lewars traveled around the northeast while growing up because of her father, living in Brooklyn (1887-1890) and then Allentown (1890-1900) where she attended Allentown High School. The family then moved to Gettysburg. Singmaster would later, in 1907, graduate from Radcliffe College, Phi Beta Kappa. In April 1912, she then married Harold Lewars, but decided to write under her maiden name, Elsie Singmaster. Elsie Singmaster was widowed after three years of marriage and never re-married.

Lewars began with short stories. These started being published as early as 1905 with "The Lese-Majeste of Hans Heckendorn" as she wrote more then 350 in her life. Most of these were popular in American literary journals and magazines. While these were being written, Lewars began writing novels in 1915 with Katy Gaumer. She totaled 42 books that were published. Most of the novels and short stories were set in Macungie, which was originally called Millerstown. Although these stories were fiction, they always had some connection to her childhood or the history of the town.

Lewars' novels were focused on stories of children and young adults focusing on their problems and challenges in a Pennsylvania German community. These novels and short stories were internationally renowned. According to the Macungie Historical Society:

Elsie's appeal as an author extended far beyond the boundaries of her home state of Pennsylvania. Her talent in telling delightful stories of children and young adults dealing with the challenges and moral values of a simple Pennsylvania German community also found popularity with an international audience.

Most of the stories that she wrote about also had relevance to non-fictional characters. According to William A. Russ of Susquehanna University in his literary review of the novel I Speak for Thaddeus Stevens (1947) in The Mississippi Valley Historical Review:

The author has chosen certain episodes of Stevens' life, some probably imaginary, others real; around these episodes, she weaves synthetic conversations, beautiful descriptions of nature, and stream-of-consciousness situations which attempt to reveal the real Stevens. As a piece of interpretative literature—interpreting the Stevens Elsie Singmaster wants you to read—it succeeds wonderfully.

These stories were published all over the world and won many awards within the United States. Novels like Bennet Malin (1922), You Make Your Own Luck (1923), Genne Kamp Til Sejr (1930) and some short stories were all published internationally. Meanwhile, in the United States, Lewars focused on the Battle of Gettysburg in the short story "The Courier of the Czar" which won Lewars a position of honor on the O. Henry Short Story Awards list. In 1933 her children's novel Swords of Steel was given the Newbery Honor Book Award. She was named a "Distinguished Daughter of Pennsylvania" by Governor James H. Duff.

Besides writing, Lewars was an advocate for a variety of things. She identified with Pennsylvania Germans since one of her parents was one. Besides Pennsylvania Germans, she also fought for women getting an education. She was in many groups that tried to accomplish this: Gettysburg Civic Nursing Association, American Red Cross, Adams County Historical Society, Adams County Public Library System, The Women's Missionary Society, and the Lutheran Church. She found countless hours to dedicate to all these associations to try and bring out the best potential for as many children as she possible could.

Elsie Singmaster Lewars died on September 30, 1958 in Gettysburg, Pennsylvania. She then was moved Macungie where she was buried with her parents and family.