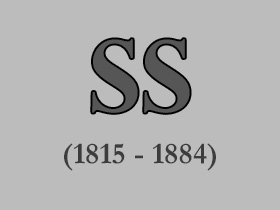 Born in Beaver Dam, Samuel T. Sloan was a successful architect and editor of Architectural Review.

Samuel Sloan was born March 7, 1815, in Beaver Dam, Pennsylvania. His parents were William Sloan and Mary Kirkwood. They had four children, of which Samuel was the second youngest. Sloan was sent for schooling and a carpenter's apprenticeship in Lancaster. After he completed his schooling, he became a carpenter at the age of 18. After winning commissions for his work for a courthouse and jail, he then took the title of architect. He went on to design many hospitals and schools throughout his career. He also wrote a multivolume book called The Model Architect. Sloan died in the summer of 1884.

Samuel Sloan was born March 7, 1815, in Beaver Dam, Pennsylvania. His parents, William Sloan and Mary Kirkwood, had a total of four children, Samuel Sloan being the second youngest. In his younger days, Sloan was sent for an apprenticeship to learn carpentry. He became a journeyman carpenter at the age of 18 and soon after married Mary Pennell in 1840. He then started work in Philadelphia.

Sloan worked on cellblocks at the Eastern State Penitentiary. This jail was the first to use solitary confinement with labor in the United States. It was one of the most popular and most expensive buildings in the U.S. at the time. Over 300 different prisons in America copied the "radial" floor plan that comprised the penitentiary. Many famous criminals were housed there, including Willie Sutton and Al Capone.

This project led to other jobs, including the Delaware County Courthouse and Jail, in which he began to collect commissions for his excellent work. In the year 1851, he finally began to feel justified in calling himself an architect. At this point in his early career he started writing The Model Architect. This book contained many volumes that had illustrations of buildings (public and private), which other architects could use as reference. These building drawings were extremely detailed showing scales, materials, and even cost estimates. They also had everything from explanations of tools to the history of architecture. He wrote these volumes throughout his entire career. The volumes are often considered his biggest contribution to the architectural field.

In 1853, Sloan became partners with John Stewart. This partnership was Sloan's most successful, lasting six years. Building became stagnant as the Civil War put a damper on expansion. In 1864, he established a new partnership with Addison Huttson. Sloan, unsatisfied with the partnership, left in 1867. After the failed partnership, Sloan returned to Philadelphia and started The Architectural Review. In the first few issues Sloan talked about his architectural style. His took his ideas from early architecture but stated frequently that America had to find its own identity. Sloan was an avid adherent of Emerson's ideology. He started this periodical because of his ties to the American Institute of Architects. He was so popular by this time that he wanted to further spread his ideas through the magazine. This periodical is now considered "The architect's favorite magazine."

Sloan's later years consisted of reestablishing his Philadelphia practice. Even though not many buildings were associated with his name, he did design the Western State Asylum for the Insane in North Carolina. This is considered his most important work. North Carolina had an estimated 700 people who were considered legally insane and not receiving proper care. The general assembly agreed to provide $75,000 to build the asylum. Sloan designed the much-needed hospital that was used to help thousands of people. After his success in North Carolina, other commissions followed. With his popularity growing in North Carolina and his practice stagnating in Philadelphia, he opened a Raleigh, North Carolina, office in 1883.

Sloan passed away on July 19, 1884. He passed only a year after moving to North Carolina, and he never got to establish himself in Raleigh as he did in Philadelphia.