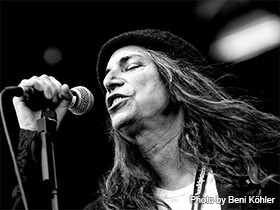 Known as the Godmother of Punk, Patti Smith was born in Chicago, Illinois, in 1946. Through the art of performing poetry in New York in the late 60s, and with the encouragement and camaraderie of her dear friend Robert Mapplethorpe, Smith developed a unique voice that led to her career in rock & roll. Her band, formed in 1974, performed what is considered the first punk song, "Piss Factory." Banga (2011), her latest studio album, is her 11th in a string spanning over 30 years. Smith's memoir Just Kids (2010) chronicles her early years in New York that kindled her artistic pursuits, and she was recently awarded the 2013 Institute for the Arts and Humanities (IAH) Medal for Distinguished Achievement from Pennsylvania State University.

Patricia (Patti) Lee Smith was born on December 30 during the Great Blizzard of 1946. Her parents — Beverly Smith, a jazz singer turned waitress, and Grant Smith, a machinist at a Honeywell plant — raised her with strong religious beliefs and taught her to pray. Smith has three younger siblings, and the Smith family moved from south Chicago to Germantown, Pennsylvania, in 1950, and then to Deptford Township, New Jersey, in 1956.

In her memoir, Just Kids, Smith recounts from childhood the companionship of her community, a love of prayer, and a means of communicating within herself, amidst trials of poverty and illness. She also discovered an enduring love of books, and describes herself as a daydreaming child who was often in trouble with teachers because of it. Smith's advanced reading skills, however, were noted. As a Deptford High School student, she also discovered and began exploring art and music and performed in plays and musicals.

After graduating in 1964, Smith began studies at Glassboro State Teachers College to become an art teacher, but struggled against the constraints of traditional curricula and eventually dropped out. In 1967, Smith moved to New York City. Living on very little money from a bookstore job, she paired up with friend and photographer, Robert Mapplethorpe, developing a supportive companionship that she now credits for nurturing her artistic career. Mapplethorpe is also the centerpiece of her memoir, Just Kids (2010), which chronicles her early years in New York.

Smith's debut as an up-and-coming figure took place on February 10, 1971, at St. Mark's Church in the Bowery, where she gave a reading accompanied by guitarist, Lenny Kaye. By that time, she'd begun to experiment with setting her poetry to music. In the years that followed, Smith published several written works. Her first book of poetry, Seventh Heaven, was published in 1972. Collections that followed include Early Morning Dream (1972) and Witt (1973), and all three of her collections received high praise. She also wrote music articles for magazines such as Creem and Rolling Stone.

Merging her love of music, poetry, and rock, Smith recorded her first single, "Piss Factory" (1974), a song often referred to as the first true punk song and based on her experience working in a toy factory after high school graduation. The following year, she released her debut album Horses (1975) with Arista Records.

"[Smith] created punk accidently," said Evan Hosie, former rock critic for Rolling Stone Magazine, in a Mini Biography video produced by A+E Television Networks (2013) and available on Biography.com. "She and Lenny Kaye, her guitarist, used to do these little gigs where she would basically intone her poetry to guitar. Then they added a piano player, and then a bassist. She inadvertently formed a rock and roll band."

The "inadvertent" Patti Smith Group went on to release three more back-to-back albums: Radio Ethiopia (1976), Easter (1978), and Wave (1979) - with Easter earning them commercial success with its megahit, "Because the Night," co-written by Smith and Bruce Springsteen.

"...[Smith] sort of burned like a supernova for three of four records. Then she fell in love with Fred Sullen Smith, who was a rock star from Detroit, and she gave it all up. She walked away for 10 years when she was still in the peak of her power," said Rolling Stone contributing editor, David Wild, in Smith's Mini Biography.

In 1980, Smith married MC5 guitarist, Fred "Sonic" Smith, and together they had a son, Jackson, and a daughter, Jesse. They lived in the Detroit suburbs, and Smith focused on raising her family for several years before collaborating with her husband to produce her first solo album, Dream of Life (1988).

Smith has also collaborated with Johnny Depp on "The Mermaid" song for the album Rogues Gallery: Pirate Ballads, Sea Songs, and Chanteys, compiled by Hal Willner (2006) and has released several poetry books, including Auguries of Innocence (2008).

In addition, Smith has earned recognition for her visual art and "...had her first exhibit of drawings at the Gotham Book Mart in 1973," according to her biography on the HarperCollins website. "[She] has been represented by the Robert Miller Gallery since 1978, [and in] 2002, the Andy Warhol Museum launched Strange Messenger, a retrospective exhibit of her drawings, silk screens, and photographs. Her drawings, photographs, and installations were shown in a comprehensive exhibit in 2008 at the Fondation Cartier Pour l'Art Contemporain in Paris. ... [And in] 2005, the French Ministry of Culture awarded Smith the prestigious title of Commandeur des Arts et des Lettres..."

In 2010, Smith published the memoir and National Book Award winner, Just Kids, which chronicles her early years in New York and her extraordinary bond with Mapplethorpe. A Rock and Roll Hall of Famer since 2007, Smith released her latest studio album, Banga, in 2011 and is touring the album through the end of December 2013.

Smith was recently awarded the 2013 Institute for the Arts and Humanities (IAH) Medal for Distinguished Achievement from the Pennsylvania State University. The IAH website states that this medal "honors individuals who have made outstanding contributions to the arts and humanities and whose work has furthered public awareness of the importance of scholarship, literature, and the arts."

Smith continues to tour, write, and create visual works of art. She currently resides in New York and will be collaborating with screenwriter John Logan on an adaptation of Just Kids. She also has a crime novel in the works.