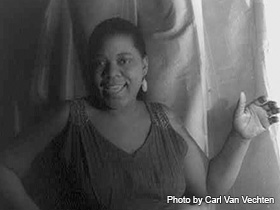 Bessie Smith, Queen of the Blues Singers, and composer of Nobody Knows You When You're Down and Out and St. Louis Blues, is buried in Sharon Hill.

Bessie Smith was born in Chattanooga, Tennessee, somewhere around 1894. The actual date is widely debated. Smith was discovered in 1919 by Gertrude "Ma" Rainey, one of the earliest great blues singers. Then in 1920, when she made Philadelphia her permanent home, her representative for Columbia Records discovered her. Smith's most famous work was "Nobody Knows When You're Down and Out." She was touring the country when she died in a car crash in Clarksdale, MS. Smith was buried in Mount Lawn Cemetery, Sharon Hill, Pennsylvania on September 26, 1937.

Little is known about Bessie Smith's early life and family. Smith was born in 1894 in Chattanooga, Tennessee, into poverty. Around the age of eight or nine her parents died, leaving her to be raised by her two sisters who were barely teenagers themselves. When her parents died, Smith helped her sisters make ends meet by singing and dancing on the corners of her hometown for what little money people would throw to her.

During her time singing on the corners of her hometown, Smith was discovered by one of Blues legend Ma Rainey's scouts in 1919, who was entranced by Smith's fiery spirit and passionate voice. Smith originally began with dancing in Ma Rainey's shows but quickly moved up to being the star of the show. By 1913, Smith had begun developing her own act and unique stage presence. By 1920, she made Philadelphia her permanent residence, where she continued her shows and recordings between touring the country.

By 1923, she had been discovered by Clarence Williams, a composer and pianist as well as a representative of Columbia Records. Her success early on earned her the nickname "Empress of the Blues," giving her the chance to work with famous musicians like Louis Armstrong, Joe Smith, Charlie Green, and Fletcher Henderson.

Once she began recording with Columbia Records, her records sold by the millions. Her first single "Down Hearted Blues," which was previously written and recorded by Alberta Hunter. By the end of her career, Smith, the highest paid black entertainer of her time, had recorded 160 songs. Her songs reflected everything she had experienced in life, such as betrayal, oppression and poverty.

In her later years, Smith fell into alcoholism; even though it didn't mar her talent, her friends and managers were wary to be around her. Her alcoholism, in fact, inspired some of her songs, such as "Nobody Knows When You're Down and Out." Smith's alcoholism was only the beginning of the problems her families and friends would face. Around 1925-1927, mid-way through her career, news of Smith's lesbianism came to light, newspaper articles covering her more famous relationships. Even though her husband, Jack Gee, couldn't read, she couldn't keep her relationships from her husband.

When the Depression hit, the popularity of blues wavered, but Smith's enthusiasm wasn't thwarted. She continued on, still managing to sell and perform despite the decline. She briefly tried to sing in the new swing style, but her audiences demanded that she sing the blues. While touring America, Smith passed through Mississippi on her way to a Memphis concert. It was in Clarksdale that she lost her life in a car accident.

When the play The Death of Bessie Smith came out, a rumor began that she was refused treatment from a white's-only hospital. The rumor says that she bled to death at the scene or on the way to a hospital in Clarksdale, MS. The rumor changes from source to source but truth remains that she died in the ambulance on her way to an all-black hospital. She was buried in Sharon Hill, Pennsylvania, on October 3, 1937.