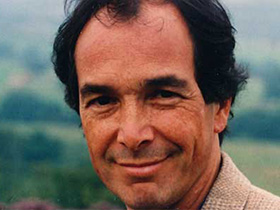 Martin Cruz Smith is a famous mystery writer, born on November 3, 1942, in Reading, Pennsylvania. He was educated at the University of Pennsylvania and received a Bachelor of Arts degree in creative writing. He worked as a journalist and an editor before starting to write fiction in the 1970s. Smith is the author of Polar Star (1989), Red Square (1993), Havana Bay (1999), Nightwing (1977), Stallion Gate (1986), and his most famous thriller, Gorky Park (1981). He has written a number of other mass market paperbacks under various pseudonyms, including Simon Quinn and Jake Logan. At the time of this writing he lives and writesin California,

Martin Cruz Smith was born Martin William Smith on November 3, 1942 in Reading, Pennsylvania. His father, John Calhoun, was a jazz musician and his mother, Louise Smith, was a jazz singer and Pueblo Indian rights leader. He was educated at the University of Pennsylvania and received a Bachelor of Arts degree in creative writing in 1964.

In 1965, he worked as a sports journalist for the Associated Press in Pennsylvania, but found himself falling asleep during the meetings. He decided to quit and look for something more exciting. In 1966, Smith moved to New York City and worked as an editor for a men's magazine entitled For Men Only. He often published his own material in the magazine under different pseudonyms, and was eventually promoted to editor. On June 15, 1968, Smith married Emily Arnold, a chef. At the end of the year, Smith was fired from his job at For Men Only.

In 1972, Smith approached publisher G.P. Putnam with an idea for a new type of mystery story. Inspired by a Newsweek article that described the process of Soviet scientists trying to reconstruct faces from otherwise unidentifiable human remains, Smith pitched a mystery following the collaboration of an American and a Soviet detective to solve a strange murder. Putnam liked Smith's novel idea and gave him an advance of $15,000 on the book. Over the next five years, Smith earned a living writing "category" fiction paperbacks—thrillers, mysteries, and westerns—including Gypsy in Amber (1971)and The Midas Coffin (1975)(written as Simon Quinn), both Edgar Award nominees from the Mystery Writers of America. Much of Smith's writing during this time was done under any one of his various pseudonyms, including the entire Inquisitor series written as Simon Quinn.

When his resources permitted, Smith continued to research the Soviet mystery he had pitched to Putnam. In 1973, Smith spent a week in the Soviet Union, absorbing details about the landscape and sketching details he was afraid to photograph. When he was later denied permission to return, Smith resorted to interviewing Russian ??migr??s for details about life in the Soviet Union. To ground his novel in realism, Smith would write a chapter and submit it to a Russian friend for approval. According to Smith, "If he would say that some Russian must have told me that, then I knew it was OK."

In the process of his research and writing, Smith abandoned the idea of a collaboration between detectives, instead choosing to write a less conventional thriller. He re-focused the novel around a Soviet detective protagonist, a decision that Putnam was less than thrilled about. The publisher was afraid that Smith's new vision for the thriller would be a tough sell and encouraged the writer to focus on an American hero.

In 1977, after a lengthy battle, Smith was able to buy back the rights to his novel from Putnam. He also made the decision to change his name from Martin William Smith to Martin Cruz Smith, which incorporated his maternal grandmother's name. In the same year, Smith's thriller Nightwing (1977)became a surprise success, earning another the author another Edgar Award nomination. Nightwing, which combines horror and thrills, is a story of Hopi Indians enmeshed in vampire-bat legends. Smith, who had Pueblo Indian heritage, admitted to relying on his "own background and research" for the thriller. Smith helped to adapt the novel for the screen two years later, but, according to a New York Times review, the "screenplay...is terrible and the special effects third-rate."

The financial gain afforded by the novel's success allowed Smith to concentrate his efforts on his Soviet thriller. He was able to complete the book and began negotiating for publishing rights with Random House and Ballantine in 1980. Smith was so confident in his novel that he insisted on naming the price. His bet paid off: by the end of the year, Random House had paid Smith a million dollars for a 100,000 copy first printing of Gorky Park (1981).

Gorky Park, which was nominated for an Edgar Award and a Gold Dagger award from the Crime Writers Association,follows the efforts of Soviet homicide detective Arkady Renko to solve a strange triple murder. Three corpses are discovered in Moscow's Gorky Park, but they are devoid of faces and fingerprints, frustrating efforts at identification. The KGB (the national security agency of the Soviet Union) insists that Renko take the case, which is complicated by a sprawling cast of characters and international intrigue. By the time Renko tracks down the killer, his investigation has taken him across two continents and has involved entanglements with the KGB, CIA, FBI and the New York police department. His eight years of research are apparent in his realistic depictions of Soviet scenes. In a Washington Post Book World review, Peter Osnos writes, "The action is gritty, the plot complicated, the overriding quality is intelligence...staying with this book is easy enough since once one gets going, one doesn't want to stop." The novel's success merited a screen adaptation, starring William Hurt, in 1983.

Smith followed the success of Gorky Park with Stallion Gate in 1986. For this novel, he investigated the individuals involved in the Manhattan Project. The members of the Project, which designed the first atom bomb, convened near Los Alamos, New Mexico to test their invention. Smith used the research skills he had honed on Gorky Park to breathe new life into the historical characters involved in the bomb's creation. Smith included such historical characters as J. Robert Oppenheimer, Edward Teller, and Enrico Fermi, all physicists involved in the creation of the first hydrogen bomb. Smith's vivid portrayal of the interaction between scientific technology and the iconic images of the desert landscape garnered him critical praise. In a Time magazine review, R.Z. Sheppard admired Smith's ability to shape "images that contain haunting affinities: wild horses and Army jeeps; rattlesnakes and coils of electrical cable; the lustrous surfaces of ceremonial pottery and the polished plutonium core of the atom bomb."

Smith's next two novels re-entered the world of Arkady Renko. In 1989, Smith published Polar Star, which picked up right after the events of Gorky Park. In Polar Star, Renko finds himself committed to an institution after his return to the Soviet Union and must escape to Siberia. He is able to find work on a Russian fishing ship called the Polar Star. Once the ship departs for the Bering Sea, one of the crewmembers is found dead in the water. Renko must investigate the circumstances surrounding the death in order to discover whether it was a suicide or a homicide. Once again, Smith's ability to create original thrills and realistic characters attracted critical attention. In the New York Times Book Review, Robert Stuart Nathan wrote that the novel's opening reminds readers "of just how skilled a storyteller Mr. Smith is, how supple and commanding his prose." The Washington Post Book World awarded Smith the title of writing "the most inventive thrillers of anyone in the first rank of thriller-writers."

In 1992, Smith released the third novel involving Arkady Renko, entitled Red Square. This novel was set in post-communist Moscow, with Renko investigating the rise of the "Chechen" Mafia in Russia. Critics once again applauded Smith's scenic creation and Jonathan Yardley of the Washington Post Book World particularly praised the author's varied subject matter. Yardley wrote that "rather than relying on the repetition of a successful formula, [Smith] has constantly sought to freshen his material."

Four years later, Smith published Rose (1996), a Victorian-era mystery. The novel's protagonist is Jonathan Blair, an explorer and engineer, who must solve the mystery of a local curate's disappearance, a circumstance that coincides with a mining accident that killed seventy-six people. The novel takes place in the English town of Wigan, and was inspired by George Orwell's The Road to Wigan Pier. New York Times Book Review writer Eugen Weber called Smith's latest effort "smartly told, engaging and worth reading."

Although some fans were initially disappointed at Smith's departure from an Arkady Renko-centric story, the author has admitted to enjoying the exploration of new characters and settings, revealing that "It gives me a great advantage. When I start, I'm aware of the extent of my ignorance, so I naturally question everything." His embrace of new characters and locales is also a result of his hatred of categorization. He says that, "The great thing about being a writer is that you are always recreating yourself." Additionally, Smith believes that the setting of each book rubs off on his writing, admitting in a Salon interview that "I think that each book, each country, has its own rhythm."

Smith would go on to publish five more books in the Arkady Renko series. In 2016, Smith published The Girl from Venice—another departure from Arkady Renko.

At the time of this writing, Martin Cruz Smith lives in San Rafael, California with his family.