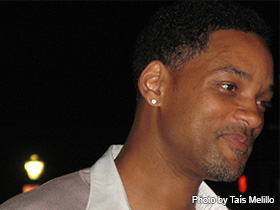 Grammy-winning rapper and Oscar-nominated actor Will Smith grew up in West Philadelphia.

In 1968, Will Smith was born in Philadelphia, Pennsylvania, and he has become a ubiquitous figure in entertainment. Smith began his career in the entertainment industry by singing rap songs with Jeff Townes at age 16, and he soon earned two Grammy awards with him. He then moved to television with the lead role in The Fresh Prince of Bel-Air, which ran for six years. After the hit television series ended, he starred in movies, taking on roles in Men in Black, Independence Day, Bad Boys, Ali, Bad Boys II, Men in Black II, and several others. He is the author of a children's book, Just the Two of Us. Will Smith is married to Jada Pinkett Smith with whom he is raising three children, two of their own and one from a previous marriage. He is currently still involved in the entertainment industry and continues to star in and produce many hit movies.

Willard Christopher Smith Junior was born on September 25, 1968, in Philadelphia, Pennsylvania, to Caroline and Willard Smith Senior. He is the second of four children. Though most people believe he grew up poor, as in The Fresh Prince of Bel-Air storyline, his family lived in middle-class West Philadelphia, and his father owned a refrigeration company. He was originally dubbed "Prince" because of the way he managed to charm his way out of trouble in school. Will graduated from Overbrook High School in Philadelphia, and he later attended Julia Reynolds Masterman Laboratory and Demonstration School in Philadelphia.

Smith began his career as a rapper at age 12 and quickly developed his own semi-comic style. At age 16, he met Jeff Townes, a fellow rapper, and the two began to perform together. They produced several hits and eventually won two Grammy Awards for Best Rap Performance for "Parents Just Don't Understand" (1988) and "Summertime" (1991). At age 18, Smith turned down a scholarship to the prestigious Massachusetts Institute of Technology in order to continue singing. In 1989, Smith met film producer Benny Medina and together they approached NBC with an idea for a sitcom. The Fresh Prince of Bel-Air was the outcome. Based on a poor kid from Philadelphia who goes to live with rich relatives in Bel-Aire, Fresh Prince ran for six years before Smith decided to end the series in order to pursue a career in film.

His first major film was Six Degrees of Separation, and this performance was hailed by the critics. He then starred in his breakthrough film Bad Boys in 1995. Since then, Smith has starred in many major motion pictures—Men in Black, Independence Day, Bad Boys, Ali (nominated for an Academy Award), Legend of Bagger Vance, Wild Wild West, Enemy of the State, Bad Boys II, Men in Black II, Hitch, The Pursuit of Happyness, Hancock, Seven Pounds, and The Karate Kid. His salary for his most recent film, Men in Black III, is listed as $20 million. Several of his other films have also earned him more than $20 million per picture. Smith has authored Just the Two of Us, a children's book, which was published in 2001 by Scholastic. This picture book is based on Smith's hit song by the same name, which was written for his son Trey. It was illustrated by Kadir Nelson. Smith was also credited by Webster's Dictionary as creating the new word "jiggy," which is defined as dancing or someone that is good-looking, "cool," or "tight." During an interview with James Lipton, Smith defines jiggy as being "nuclear cool."

Smith married star Jada Pinkett in 1997, and they have two children, a son, Jaden Christopher Syre Smith, born July 8, 1998, and a daughter, Willow Camille Reign Smith, born October 31, 2000. Smith was previously married from 1992 to 1995 to Sheree Zampino, with whom he has a son named Willard Smith III, nicknamed Trey. Smith continues to work in the entertainment industry as a producer and actor. His most recent film, Men in Black III, is forthcoming in 2012.