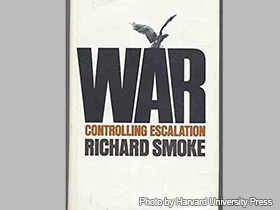 Huntingdon native, Smoke has written in great depth about foreign policy, especially on issues dealing with nuclear weapons, as in War: Controlling Escalation (1978).

Political scientist Richard Smoke was born in 1944 in Huntingdon. After an excellent education at Harvard and MIT, Smoke became a professor at Brown University. His first book, Deterrence in American Foreign Policy (1974), earned him the Bancroft Prize in History. Smoke committed suicide in 1995.

Following a brief stay in the Harvard administration as assistant dean for research, Smoke moved to Providence to take up a position with Brown University. He would concurrently hold other fellowships and directorships at schools in California for the rest of his life.

In 1974, Smoke published his first book, Deterrence in American Foreign Policy: Theory and Practice. In that book, Smoke and his co-author Alexander L. George sought to give "a critical examination of deterrence theory and deterrence strategy as they have been applied in American foreign policy since the end of World War II." Reviewers in the field of international politics and history received it most favorably. Norman D. Palmer wrote in his review, "They also believe that the theory of deterrence needs to be broadened and reformulated. To this highly desirable objective they have made a major contribution." Smoke and George received the 1975 Bancroft Prize in History for the book. As Richard Morin described it, the Bancroft Prize is "one of the most prestigious honors a book of history can receive."

In the wake of this book, Smoke's academic interests shifted. He told an interviewer for Contemporary Authors:

I started out as a professional political scientist interested in U.S. foreign and national security policy. Before too long, I became convinced that the problems involved in achieving better policy could not be solved without attention to the psychological dimension of decision making. I got involved in what is now called political psychology and spent some years in an institute dedicated to multi-disciplinary social science. My recent and planned work tries to apply this multiple perspective to the problems of peace, security, and a sane world order.

The tenor of his academic activity reflected this interest. In 1982, for example, he created the Peace and Common Security Institute in California. In subsequent years he would publish a number of books on the potential nuclear conflict with the former Soviet Union.

Smoke committed suicide in Sarasota, California, in May 1995. He was on leave from his position at Brown, working at the Stanford University Center for Advanced Study in the Behavioral Sciences. An internship at Brown University's Watson Institute for International Studies has been named in his honor.