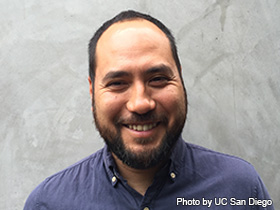 Born on August 13, 1975, to Gina Mendoza and Don Som, Brandon Som grew up in Phoenix, Arizona. He earned his BA in English from Arizona State University, his MFA in Creative Writing from the University of Pittsburgh, and his PhD in Literature and Creative Writing from the University of Southern California. Som is a poet and essayist who has taught at several universities, including New York University and Chatham. His chapbook, Babel's Moon, was published in 2011, and his first full-length poetry collection, The Tribute Horse was published in 2014 from NightBoat Books.

Brandon Som was born on August 13, 1975, in Phoenix, Arizona to Gina Mendoza and Don Som. Som spent his formative years in the Grand Canyon state and earned his BA in English from Arizona State University. Following graduation, Som moved eastward, landing at the University of Pittsburgh. After spending several years in Squirrel Hill, Som earned his MFA in Creative Writing. He received his PhD in Literature and Creative Writing from the University of Southern California.

During the summers of 2000 through 2002, Som taught at the University of Pittsburgh's Young Writer's Institute. In the summer of 2003, he accepted a position to teach for Semester at Sea, a program that gives students the opportunity to spend a semester aboard a cruise ship traveling the world. Since his return to dry land, Som has gone on to teach at Chatham University in Pittsburgh as an Adjunct Lecturer and at New York University as an Instructor in Expository Writing and a Writing Center Consultant. In addition to teaching, Som has worked for a book seller and he continues to write poetry and essays.

Som can be described as a public poet. This is a classification that he calls, "an interesting genre in that [poetry] is often read and practiced in private." He acknowledges that his "desire to be a public poet, to share [his] work publicly, is a desire to celebrate and advocate for private space and the personal imagination." His hope is that readers "might hold a line and feel the urge to utter it," thus connecting with his major themes of representation, less, and the construction of the self.

Som has had his work printed in several publications since his inaugural showing in Barrow Street in their Summer 2000 edition. These publications include Black Warrior Review, Indiana Review, McSweeney's (Poetry Chain), and Octopus Magazine. In the spring of 2002, Som was nominated for a Pushcart Award for his poem "Celestials."

His poem, "Alba: The Archer Yi", was selected for publication by the Public Poetry Project of the Pennsylvania Center for the Book in 2007.

Babel's Moon (2011), winner of the Snowbound Chapbook Award, was Som's first published work. Natalie Eilbert of The Rumbus says of the collection, "Som, in his selective silence, has pushed his darkness into his objects and animals, leaving the reader with mischief and pleasure in a dwindling nature. Som is ready for the world to see further into his wilderness, if chapbooks are any reflection of great collections to come."

His full length collection, The Tribute Horse, was selected by poet, essayist, fiction writer, and translator Kazim Ali for the 2012 Nightboat Poetry Prize and was then published in 2014 from Nightboat Books. Ali writes of his selection: "...Using found text, fractured lyric, prose poem and oulipian narrative, Som constructs a poetry deep in its theoretical rigor, ravishing in its sonic pleasure, and delicate in its formal constructions."

At the time of this writing, Som teaches at UC San Diego. He has received fellowships to the Virginia Center for the Creative Arts and the Provincetown Fine Arts Work Center.