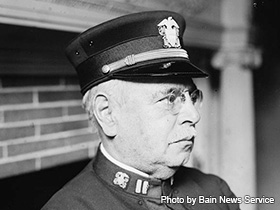 On November 6, 1854, John Philip Sousa was born in Washington, D.C. He began to play the violin at the age of six. Five years later, Sousa became an apprentice for the Marine Band, and he later became the conductor. John Philip Sousa was known as the "March King" because of his fabulous marches. His most popular march is The Stars and Stripes Forever. John Philip Sousa died on March 6, 1932, in Reading, Pennsylvania, from a heart attack.