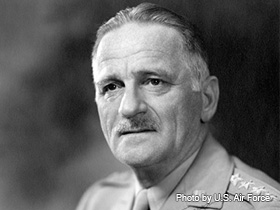 Gen. Spaatz led the air assault on North Africa and on the German homeland in WWII.

Carl Spaatz, a West Point graduate, was born in 1891. He and his crew made the world record for keeping the aircraft "Question Mark" in the air for over 150 hours in 1929. During WWII, he was the commander of Eighth Air Force in Europe, the air commander for the Allied invasion of North Africa and the commander of strategic air offensive in Pacific. He was also the first Chief of Staff of the United States Air Force when the Air Force became a separate branch. He died in 1974.

Carl Andrew Spaatz was born on June 28, 1891, in Boyertown, Pennsylvania. His last name was originally Spatz until he added the extra "a" in 1937 to encourage the correct pronunciation "Spots" instead of "Spats." He lived in Pennsylvania until he was eighteen when he entered the United States Military Academy at West Point. He gained the permanent nickname "Tooey" from his classmates because of his similar facial features to an upperclassman, Francis J. Tooey.

Spaatz left the Academy with the desire to become a pilot. Before he could join the Aviation Section of the Signal Corps, the rules required him to serve one year in unrestricted line duty. He was assigned to an all black company of the 25th Infantry Regiment stationed in Hawaii. There, he met Ruth Harrison, daughter of a cavalry officer, and married her two years later. When his service in the infantry ended, Spaatz began his flight training at North Field in San Diego on November 25, 1915. Two years later, he received a promotion to major and later went to France after the U.S entered World War I. He became the commander of the 3rd Aviation Instruction Center at Issoudun, France. It had the largest training field in the world for training flying officers by the time Spaatz left in September 1918. Spaatz impressed Brigadier General William "Billy" Mitchell who wanted to send him back to upgrade the Air Service in the U.S. Spaatz wanted to be in combat and managed to join the 2nd Pursuit Group of the 13th Aero Squadron. He was awarded the Distinguish Service Cross on September 26th and appeared in the New York Times for shooting three planes—two German and his own. His plane crashed at no-man's land due to lack of fuel because he was too concentrated on the fight and neglected his fuel status. Mitchell told him by the time he left for home, "I will be glad to have you command a group at any time under my command."

Spaatz returned back to the U.S and served as Inspector of Pursuit Training to the Aviation Service's Training Department on October 13, 1918. During the years between WWI and WWII, he met the future chief of the Air Force, Col. Henry H "Hap" Arnold in Washington for the first time. The two became fast friends and formed a bond that benefited their careers. Both of them testified for the defense in William "Billy" Mitchell's court martial in 1925.

On New Year's Day, 1929, Spaatz also set the world record along with four other crew members for keeping the aircraft Question Mark in continuous flight for 150 hours, 40 minutes, and 15 seconds. The Distinguished Flying Cross was awarded to the crews and the mission started the era of aerial refueling. Spaatz then attended the Army Command and General Staff School in 1935 when he became a lieutenant colonel. After his graduation, he stayed in Langley Field, Virginia until he was called back by Major General Arnold three years later. Spaatz became the Chief of the Plans Section of Office of the Chief of Air Corps to help on the air portion of the rearmament program as the war in Europe intensified.

To get a current status of the war in Europe, General Arnold sent Spaatz to Britain as an official Air Corps observer. In June 1941, he was made the first chief of Air Staff by Arnold after the creation of the Army Air Force (AAF). After the attack on Pearl Harbor, Spaatz became the commander of the Eighth Air Force. During the summer of 1942, strategic German targets such as railroads, industries, and coastal ports were being bombarded heavily by B-17 and B-24 bombers. About 1000 bomber sorties had been launched by the end of October and the strategic plan changed its focus to Africa.

The Allied invasion of French North Africa began in Nov. 8, 1942, Supreme Allied Commander Dwight D. Eisenhower appointed Spaatz as the air commander for Operation Torch, the invasion of North Africa. With control of all the air elements, the bombers were sent to attack Axis airfields and the fighters dominated the dogfights in the air. Most of Axis airpower had been reduced by mid-April and over 2000 sorties were sent for direct support of Allied ground troops in Tunis. The Axis troops surrendered on May 17 and, thus, marked the end of the North African campaign. Soon after came the Allied invasion of Sicily and Italy, with Spaatz's bombing of Rome on July 19, 1943, Benito Mussolini fell from power on the 26th.

By the time the Allied forces prepared for the invasion of France, Spaatz became the commander of the United States Strategic Air Force in Europe (USSTAF). He knew Germany could not defend inland nor attack the beachhead if enough Luftwaffe planes were disabled. Thus the USSTAF launched Operation Argument on February 20, 1944. The five day raid, also known as "Big Week," was a joint force attack by the Eighth and Fifteenth Air Forces on the German aircraft industry. Spaatz then sent his forces to attack the Nazi capital and force the Luftwaffe to fight. Due to the raid, the German fighter aircraft production was delayed for two months.

In March, Eisenhower chose to implement a rail attack plan instead of Spaatz's oil plan to aid the cross-channel invasion. On the surface, Spaatz carried out the mission to bomb railroads but actually bombed oil production targets behind the scenes. Eventually Eisenhower and he made an agreement that he could launch two attacks on oil targets to test the German reaction. The oil bombing started on May 12th and the strong enemy resistance confirmed his judgments. A week after the attack, in a report to Adolf Hitler armaments minister Albert Speer stated "the enemy has struck us at one of our weakest points. If [he] persists at this time, we will soon no longer have any fuel production worth mentioning." As a result of the attack, Eisenhower made oil targets the highest priority for the rest of the war. Spaatz's chief lieutenant, Jimmy Doolittle, famed for his 1942 raid on Tokyo, later said in an interview, "I idolize General Spaatz. He is perhaps the only man that I have ever been closely associated with whom I have never known to make a bad decision."

By the time the Allied forces invaded the French beachhead, the enemy air resistance was extremely light. For the rest of Allies' invasion, Spaatz provided aerial support and aerial resupplies to ground forces. When the Allies reached the German border, oil and transportation systems became his two top bombing targets. German industry was completely destroyed by February, 1945. According to Eisenhower, Spaatz was an "experienced and able air leader; loyal and cooperative; modest and selfless; always reliable." Eisenhower further praised Spaatz by saying he was one of two American officers who contributed the most in the victory in Europe. Spaatz was promoted a month later to a full general and attended the surrender of Germany to the Americans on May 7th. Two days later, he attended the surrender of Germany to the Soviet Union.

For the war in the Pacific, Spaatz became the overall command of the Twentieth and Eighth Air Forces. On August 6, 1945, he ordered the atomic bombing of Hiroshima and Nagasaki after receiving the authorization from President Truman. He was interviewed by Len Giovannitti in 1964 about the bombing; he explained that "the dropping of the atomic bomb was done by a military man under military orders. We're supposed to carry out orders and not question them." He also emphasized that the moral choice was not his by stating that he would not carry out verbal orders for this mission. On September 2nd, Spaatz attended the Japanese surrender on the deck of USS Missouri.

After the war ended, the work on having a separate air force began. Due to Arnold's bad heart problem which forced him from active duty, Spaatz took over his place and became the second and last Commanding General of the AAF. He created Air Defense Command, Strategic Air Command and Tactical Air Command to change the AAF structure. These three commands eventually became the backbone of today's Air Force. Spaatz himself became the first Chief of Staff of the Air Force when it finally became a separate branch on September 1947. He made two more contributions for the Air Force by creating the Air Staff and defining the roles of the new branch.

From 1950 to 1951, Spaatz was the Air Force Association Chairman of the Board for one term and worked as a columnist for Newsweek until 1961. At the age of 70 he finally retired for good and died on July 14, 1974 from a stroke. He was buried at the site he helped selected for the Air Force academy — Colorado Springs.

In honor of General Spaatz, the highest award for Civil Air Patrol is named "General Carl A. Spaatz Award."