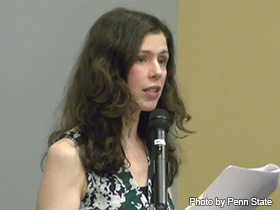 Laura Spagnoli is a Pennsylvania Center for the Book Poetry Project poet known for her poetic wit and debut chapbook, My Dazzledent Days.

Laura Spagnoli is a poet whose debut collection My Dazzledent Days (2012) was published by ixnay press, an independent press in Philadelphia. Her work makes many references to Philadelphia and explores the intersection of femininity and commercialism. In 2010, her short story "A Cut Above" was also published in the Philadelphia Noir collection (Akashic Books). Her poem "Waiting for Test Results in the Kitchen," from Philadelphia Stories (Winter 2006/2007), was selected for publication by the Public Poetry Project of the Pennsylvania Center for the Book in 2017. At the time of this writing, Spagnoli resides in Philadelphia, where she teaches French at Temple University.

She has lived in Philadelphia for over 20 years. "There are a lot of...great poets there," she says, "and good energy."

She's especially grateful to Philadelphia's ixnay press for publishing her first chapbook, My Dazzledent Days (2012). In it, her work often references the city, e.g. Market Street, the Liberty Bell, Philadelphia PECO building, and subway tokens/cards. Other pieces explore the intersection of commercialism and femininity; for instance, in "Beauty," "Poemfomercial," "I'm Gonna Wash That Moon Right Out Of My Hair," and "Marilyn Looks Back On Her Dazzledent Days," a reference to the fictional toothpaste in the movie The Seven Year Itch and the chapbook's title.

In an interview with Speaking of Marvels editor William Woolfitt, poet Kelly McQuain says My Dazzledent Days is "smart and warm and funny."

Fellow Philadelphia poet, Nicole Steinberg says this about Spagnoli's Public Poetry Project poem: "In relatively few words, 'Waiting for Test Results in the Kitchen' imbues an otherwise mundane moment with uneasiness, playfulness, and tenderness. The result is a shivery, exceptional poem that demonstrates Laura Spagnoli's ability to delight and to devastate with the deft precision of her verse."

Spagnoli's poetry has appeared in numerous publications, including Bedfellows, Trinity Review, The Literary Review, The Apiary, Painted Bride Quarterly, and more. In 2010, her short story "A Cut Above" was also published in the collection Philadelphia Noir (Akashic Books). At the time of this writing, she and her husband have a daughter and live in Philadelphia, where Spagnoli teaches French at Temple University.