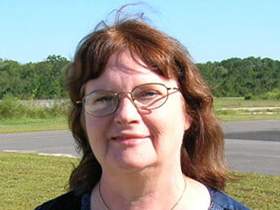 Science fiction and fantasy writer Nancy Springer attended Gettysburg College and lived in several different Pennsylvania towns for much of her life. She is a prolific author, publishing several series and even more stand-alone novels throughout her career. Springer’s Enola Holmes series, starring the younger sister of Sherlock Holmes, was adapted into a Netflix film. Read more here.

Nancy Springer was born in Montclair, New Jersey, on July 5, 1948. Her parents were Harry E. Conner and Helen Conner. On September 13, 1969, she married Joel Springer, with whom she had two children.

Springer's novels have established her as one of few authors who write for both adults and children. Her primary genre for both audiences is science fiction and fantasy. In all, she has published more than 30 works since The Book of Suns.

Springer has received acclaim for her science fiction as well as for her children's books. Although she never won an award for her science fiction, she has been nominated for awards such as the Nebula for Apocalypse. In 1988, she received an International Reading Association Children's Book Council Children's Choice citation and a Florida Master Reading List citation. In 1989, she also received a Georgia Master Reading List citation for A Horse to Love. She won the Joan Fassler Memorial Book award in 1992 for Colt. In 1995, she was awarded the Edgar Allan Poe Award for Best Young Adult Novel by the Mystery Writers of America for Toughing It.