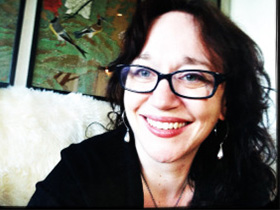 The professor, essayist, and poet, Sheila Squillante earned her MFA in poetry from the Pennsylvania State University (Penn State) and later taught at the university for 11 years. She has published numerous essays and poems in literary publications, as well as poetry chapbooks including, A Woman Traces the Shoreline (2011), In This Dream of My Father (2014), and Beautiful Nerve (2016). Squillante is the recipient of a MacDowell Colony fellowship, as well as others, and at the time of this writing is an Assistant Professor of English and the Associate Director of the MFA in Creative Writing program at Chatham University in Pittsburgh.

Born on October 3, 1970, in Yonkers, New York, Sheila Squillante is a professor, essayist, and poet. She has published work in a variety of publications, including The Rumpus, Cream City Review, Quarterly West, and Literary Mama.

In an essay for Redux: A Literary Journal, Squillante reveals that she had never written prose of any kind prior to a memoir workshop she took with Vivian Gornick while earning her MFA in poetry (2002) at the Pennsylvania State University (Penn State). Before then, she says, "I was a poet and a poet only." A year later, a friend from the class encouraged Squillante to send her first-ever prose piece, "Shift," to Glamour Magazine's call for submissions.

The piece was retitled and published in 2003 by Glamour as "Love, Loss and Another Day at Work" — winner of the magazine's first creative nonfiction contest, known as The Story of Your Life Contest.

Since, Squillante has gone on to publish multiple poetry chapbooks—including A Woman Traces the Shoreline (2011), Women Who Pawn Their Jewelry (2012), and In This Dream of My Father (2014)—as well as to receive fellowships from the MacDowell Colony and the Virginia Center for the Creative Arts. Her work has been nominated for the Pushcart Prize, Best American Essays, Dzanc's Best of the Web, and Sundress Publication's Best of the Net anthologies.

Her essays often explore personal experience through rich and varied perceptions of food, for instance in her essay "Two Suicides" she writes, "Saltines and butter were his favorite snack. Saltines are his body, dancing naked and unabashed in front of whomever, even you. ... Saltines are his spirit, failing, a little further every day."

"Meat Ragu a la Squillante," another of her essays, is even written in the form of a recipe, opening with the familiar list of ingredients, followed by a first line of paragraphed instructions that reads, "Begin with tears." The piece goes on to explore the emotional seesaw of familial loss, both recent and yet to come, within the space of a busy kitchen.

The memoir-in-essays she is currently working on, Squillante says on her website, "moves from childhood into early adulthood and [her father's] death, into a failed first marriage, and finally into feminism and a second marriage and children—all through the lens of food—one of my principle interests and pleasures, both in life and in writing." The work-in-progress celebrates her relationship with her father, who passed away when Squillante was in college, and is currently titled, "All Things Edible & Odd."

Along with Dave Housley, founding editor of Barrelhouse Magazine, Squillante is also responsible for culling and editing the anthology, Notes From Inside a Burst Bubble: A Community Reacts to the Penn State Scandal (2014). According to The Rumpus, the anthology chronicles the Penn State community's reaction to the Sandusky child sex abuse scandal that began to unfold in 2011. Notes From Inside was published using Indiegogo crowd-sourcing to fund the cost of printing; all surplus funds and all profits from the book have been donated to the Rape, Abuse and Incest National Network (RAINN).

Sheila Squillante's first full-length poetry collection, Beautiful Nerve (2016) was one of four books chosen to be previewed at the 2015 Conversations & Connections writer's conference in Washington, DC.

Her poem "This Weather," from Beautiful Nerve, was selected for publication by the Public Poetry Project of the Pennsylvania Center for the Book in 2015.

That same year, Squillante (with Sandra L. Faulkner) published Writing the Personal: Getting Your Stories Onto the Page, a classroom writing guide for transferring lived experiences to the page.

After teaching at Penn State for 11 years, Sheila Squillante became an Assistant Professor of English and the Associate Director of the MFA in Creative Writing program at Chatham University in 2013, where, to date, she continues to serve in these positions. At the time of this writing, she also serves as Editor-in-Chief and Nonfiction Editor for The Fourth River Literary Journal, Blog Editor for Barrelhouse, and she was once an Associate Editor at PANK Magazine.