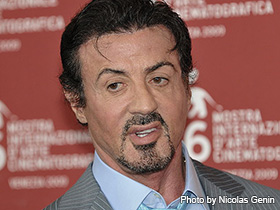 Sylvester Stallone was born in New York on July 6, 1946. He moved to Philadelphia after his parents' divorce where he attended High School at Devereux Manor. After marrying his first wife Sasha Czack, Stallone moved to California where he pursued a career in acting. Fed up with small movie roles, Stallone wrote a screenplay for Rocky; he directed and starred in each installment of the film. He was starred in four Rambo films in which he played a Vietnam Veteran. Stallone is currently married to his third wife Jennifer Flavin. The couple lives in California with their children.

Sylvester "Sly" Stallone was born on July 6, 1946 in New York's "Hell's Kitchen." An accident at birth caused by forceps severed a nerve in his cheek, leaving his lower left face paralyzed; this manifested as Stallone's trademark slurred speech and drooping lower lip. After Stallone's parents, Jackie and Frank Stallone, were divorced in 1957, he moved from New York to the suburbs of Philadelphia. He lived there with his mother and her new husband Anthony Filiti, a pizza manufacturer. The teenager attended a private Catholic School in Center City Philadelphia called Notre Dame Academy. He then attended Lincoln High School but after failing to complete tenth grade, he was enrolled in Devereux Manor High School for emotionally troubled youths; Stallone was expelled from fourteen schools by the age of thirteen. At Devereux Manor, the teenager took up football, the discus, and began lifting weights. When it was time to graduate, he was awarded an athletic scholarship to the American College of Switzerland where he spent two years coaching girls athletics. He also starred in a production of Arthur Miller's Death of a Salesman in college which inspired him to become an actor.

In 1969, after returning to the states, Stallone attended the University of Miami where he studied drama until he moved back to New York to pursue a career in acting. He auditioned frequently but had trouble getting work, so he resorted to starring in the soft core porn The Party at Kitty and Stud's. Stallone also played small parts in films such as the comedy Bananas (1971) and the thriller Klute (1971). In 1974, Stallone married first wife Sasha Czack and moved to California in hopes of expanding his acting career; they had sons Sage and Seargeoh while married. It was in California where Stallone received a crucial break, starring in 1974's The Lords of Flatbush, a film about a gang of teens. The movie was only moderately successful, but earned recognition for "Sly," getting him auditions for larger roles.

Stallone was not content playing the roles he had received thus far, so he threw himself into writing screenplays. His first screenplay to become successful was inspired by the 1975 fight of Muhammad Ali and Chuck Wepner in Cleveland. In Stallone's version, titled Rocky, a boxer named Rocky Balboa is given the opportunity to challenge Apollo Creed for the heavy weight title. Many people were eager to buy the rights to this screenplay, but Stallone decided that he wanted to keep the rights and play the role of the film's main character. Producers Irwin Winkler and Robert Chartoff accepted Stallone's terms and picked up the screenplay. In 1976, Rocky became a box office hit, earning ten Academy Award nominations, including Best Actor for Stallone; it won awards for Best Picture, Best Director, and Best Film Editing. The film was well received by critics. In a BBC film review, Almar Haflidason wrote that Stallone gave "the type of punch-drunk performance that captures the viewers' hearts when the whole world seems stacked against him."

The Academy Award nominee followed his success with 1978's F.I.S.T. and Paradise Alley. In1979, Stallone broke out his gloves again to reprise his role as Rocky Balboa in Rocky II. In Rocky II, Balboa agreed to a rematch with heavyweight champion Apollo Creed. Janet Maslin of The New York Times criticized Rocky II ashaving "a waxy feeling" and accused it of "never [coming] to life the way its predecessor did." The second installment of the Rocky series, although not as successful as the first, grossed $200 million around the world. Stallone continued to star in action-packed roles such as 1981's Nighthawks and Victory, but gained real success when he starred in his next big role in First Blood.

In the film, Stallone played John Rambo, a disoriented Vietnam vet who spends time wandering a small town in the Northwest. Rambo gets mistreated and spends the rest of the movie getting even. First Blood commented on the Vietnam War at a time when it was still fresh in American minds, leaving audiences polarized. The film earned Stallone $3,500,000 as well rave reviews from critics. Janet Maslin of The New York Times described Stallone as "unexpectedly commanding." The film catapulted Stallone to the top of the list of male action heroes in the 1980's.

On June 14, 1984, Stallone was honored with a star on the Hollywood Walk of Fame at 6712 Hollywood Boulevard alongside Dolly Parton, his co-star in 1984's Rhinestone. After receiving his star, Stallone went back to his boxing roots and prepared himself for the third installment of the Rocky movies; Rocky III outperformed its prequels at the box office. Although entertaining, fans believed that the violence of this beating was excessive. Vincent Canby of The New York Times wrote that "the new movie is funnier, though no less quick to deliver spongy thoughts to live by." Riding the success from the franchise, Stallone called on Rocky to take him to the top again with Rocky IV. In the film, Ivan Drago, also known as the "Siberian Express," brutally beats Apollo Creed. This installment of the film proved to be the most financially successful, earning $20,000,000 on its opening weekend.

In December of 1985, Stallone married his second wife, actress Brigitte Nielsen; the marriage was short lived and ended in July of 1987. After his divorce, Stallone starred in the two First Blood sequels: First Blood II in 1985 and Rambo III in 1988. In First Blood II, Rambo is captured by the Viet Cong and tortured by a Russian General. Film Critic Jeremiah Kipp described the film as "a macho fantasy created to convince Americans that we could have won Vietnam if only we'd trusted John Rambo." He also noted that "nobody will confuse this for a quality film." In Rambo III, Rambo's Vietnam commanding officer Colonel Trautman is held in Afghanistan as a hostage, and Rambo goes on a mission to rescue him. Christopher Null of Filmcritics.com described the movie's plot as "mindless action." Although these films were disliked by critics, they were box office hits. Stallone filled the void between these films by playing macho roles in 1986's Cobra, Over the Top in 1987, and in Tango & Cash in 1989.

In 1990, Stallone put his gloves back on for what he believed would be the fifth and final installment of Rocky. In Rocky V, Rocky Balboa fights "Tommy Machine Gunn," a real life heavyweight fighter. The film earned Stallone $15,000,000, but only $44,904,450 at the box office. He quickly followed with the comedy Oscar in 1991, Stop! Or My Mom Will Shoot in 1992, and the futuristic action film Demolition Man in 1993. Sly also played the title character in 1995's comic book inspired Judge Dredd; the movie was a flop in the United States but earned international success. Shying away from action movies, Stallone packed on a few pounds to star alongside Robert De Niro in 1997's Cop Land. This movie surprised many critics because it was not Stallone's typical genre of work. In a movie review from The Rolling Stone, Cop Land is describes as "the strongest piece of material to come Stallone's way since he invented himself as Rocky 21 years ago." On August 27, 199, while engaged to girlfriend Jennifer Flavin, Stallone had his first daughter Sophia Stallone. He then married Flavin on May 17, 1997, and they had two more children Sistine and Scarlet Stallone. In 1998, the action hero lent his voice to a solider ant named Weaver in the computer animated film Antz. The hit movie had an all star cast including Gene Hackman and Christopher Walken. Shortly after, the action hero starred in the remake Get Carter in 2000, Driven in 2001, and Spy Kid 3-D: Game Over in 2003.

In 2005, Stallone took his career down a different path and teamed up with boxing champion Sugar Ray Leonard to star in the reality television show The Contender. Sixteen contenders saw Stallone as their mentor while they competed for the $1,000,000 prize as well as a career in professional fighting. The show ran for one season on NBC, and was then picked up by ESPN for a second season. The Contender failed to capture audiences' attention and was cancelled after two seasons.

Stallone's most recent films include two installments of his most successful franchises. At the age of sixty, Stallone directed and starred in the sixth installment of the Rocky series, Rocky Balboa. In the film, Rocky comes out of retirement to stage yet another heavyweight comeback. The film earned $150,000,000 worldwide. Stallone followed this film with Rambo; in the fourth installment of First Blood, John Rambo fights the Burmese Army in Burma. A.O. Scott of The New York Times described it as "a blood bath punctuated by occasional bout of clumsy dialogue." His face is described as "a misshapen chunk of granite and his acting is only slightly more impressive."

Recently, Stallone received the Lifetime Achievement Award from the USA Academy of Science Fiction, Horror, and Fantasy Films. He continues to be a business man as one of the founding partners of Planet Hollywood. In 1992, this chain of themed restaurants and entertainment complexes portraying Hollywood was launched in New York; it is also co-owned by Bruce Willis, Demi Moore and Arnold Schwarzenegger. Sylvester Stallone currently lives with his wife and children in California.