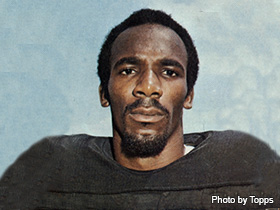 Hall of Fame wide receiver John Stallworth played for the Steelers from 1974 to 1987.

John Lee Stallworth was born on July 15, 1952, in Tuscaloosa, Alabama. After attending Alabama A&M, he was selected in the fourth round of the NFL draft in 1974 by the Pittsburgh Steelers. Playing wide receiver for the Steelers from 1974-1987, Stallworth accumulated six AFC championships, four Super Bowl championships and two MVPs. He founded the Madison Research Corporation in 1986, which continues to grow as a company. In 2002, John Stallworth was inducted into the Pro Football Hall of Fame.

John Lee Stallworth was born on July 15, 1952, in Tuscaloosa, Alabama. He grew up with his two brothers, Spikey and Philip, as well as his sister, Mary. During his childhood, Stallworth was paralyzed and doctors told him he would never walk again. Little to be known was that he would overcome the disability and become one of the great football players of our time. When he reached Tuscaloosa High School as a freshman, it had only been racially integrated for three years. Stallworth spoke about the common bonds both white and blacks formed on the football team in his article in INC. Magazine, saying that they "all drank from the same water bucket." While he was always intending to play wide receiver, an inconsistent quarterback and an encouraging coach forced Stallworth to play running back for his team. Despite being his high school football team's captain, Tuscaloosa High only managed to win one game Stallworth's senior year.

Like most Tuscaloosa High School students with aspirations to play football in college, John Stallworth wanted to attend the University of Alabama. Unfortunately, Alabama's coach, Paul Bryant, was unimpressed with Stallworth. Stallworth then turned his attention to a Division II school, Alabama A&M, for whom he played football in 1972 and 1973. The Pro Football Hall of Fame quoted Stallworth as saying, "Looking back, I wouldn't change a thing. Hindsight is always twenty-twenty, but I could have been lost in the shuffle at Alabama. They weren't throwing the ball a whole lot in those days." In his days at Alabama A&M, he eventually met his wife, Joanna. He majored in Business Administration, concentrating in Management. He also received an MBA from Alabama A&M.

In the spring of 1974, Stallworth entered the NFL draft and was taken in the fourth round by the Pittsburgh Steelers. He was regarded as an excellent draft pick as he had been described by critics, teammates and coaches as being blessed with an incredible amount of speed and the ability to leap for catches others would not be able to make. John Stallworth was clocked at running "the 40" in 4.5 seconds. While the wide receiver sat the bench his rookie year, he became a starter for the Steelers during his second season and never relinquished that title throughout his 14 year career. John Stallworth broke records for the Steelers in number of catches (537), yards (8,723) and touchdowns (63). Currently, he is still in the Steelers' record book with the most touchdowns and yards. Stallworth also holds Super Bowl records for the career (24.4) and game (40.3 during Super Bowl XIV) average yards per catch. He played in six AFC championship games and four of the Steelers' five Super Bowl victories. Stallworth's time with the Steelers was punctuated with several injuries ranging from his foot to knee that forced him to sit out 44 regular season games.

While Stallworth started off his career with the Steelers somewhat slowly, in 1975 he started nine games and was tied for the lead in the AFC for average yards per catch (21.2). Unfortunately, soon afterwards, Stallworth was plagued with injuries that caused him to sit out for more than he wanted to. The Pro Football Hall of Fame quotes John Stallworth as saying, "It was a really tough time for me. It was psychologically damaging. If it hadn't been for my wife and friends, I couldn't have gotten through it." Stallworth's determination and competitive attitude helped him return to the game with a new-found spirit for the game. He entered the 1977 and 1978 seasons playing well and dazzling fans with spectacular catches and plays. In Super Bowl XIII, he caught three passes for 115 yards in the first half of the game, two of them for touchdowns. Stallworth's 1979 season for the Steelers became one of his most successful years on the team. He set the record with 70 receptions for 1,183 yards. During Super Bowl XIV, the Steelers were trailing the Rams by two points in the fourth quarter. Lynn Swann and another backup receiver had been knocked out of the game and it was up to John Stallworth to make the big play to lead the team to victory. Despite an overthrown pass from Terry Bradshaw, Stallworth caught the ball, beat the defender and sprinted for the end zone. He described the catch to Sports Illustrated: "My 73-yard catch and run put us up 24-19 and triggered a sigh of relief on our sideline. Not only had the play worked, but it broke the Rams' backs too. We knew we were ahead to stay." Stallworth ended the game with three passes for 121 yards and a touchdown. The Steelers would go on to win that Super Bowl on January 20, 1980, by a score of 31-19. For his achievements during his breakout year, John Stallworth was awarded All-Pro and All-AFC honors and his teammates acknowledged his accomplishments with the MVP award for that year.

While 1979 was a year for Stallworth to shine, the next season was devastating for Stallworth when he cracked his fibula. For the 1980 season, he was only able to play in three of the games and focused his attention on returning healthy for the next year. His dedication paid off, as he returned in the first game of the new season with a touchdown and a 56 yard catch. The 1980 season ended with Stallworth racking up 63 receptions for 1,098 yards.

Despite continuing injury throughout 1983, Stallworth had one of his most prolific seasons in 1984. At 32-years-old, he ended the season with 80 receptions for 1,395 yards and 11 touchdowns. John Stallworth, previously doubted by critics due to his prolonged injuries, was named Comeback Player of the Year. While 1984 could be described as his magical season, Stallworth continued his comeback success for the next three seasons. In 1987, he announced his retirement from professional football, but did not plan on fading into the background and basking in the success as a former athlete--he had more he needed to accomplish.

On a less public front, John Stallworth, his wife Flo and friend Sam Hazelrig founded Madison Research Corporation (MRC) in 1986. Stallworth told INC. Magazine that this corporation was created as a support to the federal government. As a primarily engineering and informational sciences company, it serves such clients as NASA, Air Force, Army and other federal agencies. Since its creation, MRC has grown in size, with Stallworth presiding as the President and CEO. Currently the company has 470 individuals working beneath Stallworth and is a $62 million operation. John Stallworth is continually committed to stretching the perceptions of professional athletes and their mental aptitude. As he tells INC. Magazine, "...the worst perception about football is that it's not a cerebral game. I had to prove that I was intelligent and that the business was legitimate."

With involvement in an exceptional amount of community activities that range from the United Way to chairperson for the Minority Business Council, Stallworth has exceeded cultural expectations placed on athletes for community service. He also established, in 1988, the John Stallworth Scholarship fund. This fund gives individuals with the potential to be successful collegiate scholars at Alabama A&M University, a chance to enroll when they would otherwise be unable to due to economic disadvantages.

In 2002, John Stallworth was awarded one of the most prestigious awards in professional football, selection into the Pro Football Hall of Fame. Joining fellow teammates, including Lynn Swann and Terry Bradshaw, this honor clearly set him apart as one of the greatest wide receivers professional football has seen. The Pro Football Hall of Fame recorded the wide receiver as saying, "My goal when I came to the NFL was to gain the respect of my peers and a certain amount of self respect." With respect from former teammates, current Steelers, family and the community, John Stallworth has clearly reached his goal, and surpassed it.