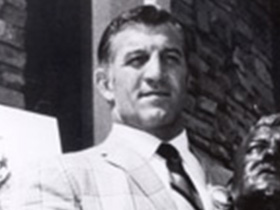 Hall of Fame defensive tackle Ernie Stautner played for the Steelers from 1950 to 1963.

Ernest Alfred Stautner was born on April 20, 1925, in Prinzing-bei-Cham, in Bavaria, Germany. After attending and playing football at Boston College, he was drafted by the Pittsburgh Steelers, where he played his entire career as a defensive tackle from 1950-63. He served as an assistant coach with the Dallas Cowboys from 1966-88, developing the Cowboys famous "Doomsday Defense," and won two Super Bowls. He died on February 16, 2006 from complications of Alzheimer's disease. Stautner had been inducted into the Pro Football Hall of Fame in 1969, and was elected posthumously to the Steelers 75th Anniversary All-Time Team in 2007.

Ernest Alfred Stautner was born on April 20, 1925, in Prinzing-bei-Cham, in Bavaria, Germany, to Joseph and Hedwig Streck Stautner. He grew up in East Greenbush, New York, near Albany, after his family had immigrated to the United States when he was three years old. While in the Marine Corps, he served during World War II from 1943-46. After his service he attended Boston College, where he played football as a four-year starter at offensive and defensive tackle. Stautner graduated from the university with a bachelor's degree in psychology in 1950.

After being selected by the Pittsburgh Steelers in the second round and 22nd overall in the 1950 NFL Draft, Stautner played his entire career with the team from 1950-63. During his 14-year career, Stautner developed into one of the NFL's most outstanding defensive players. At 6 feet and 1 inch, 230 pounds, he was undersized but made up for it with his tremendous strength and durability. Stautner has the unusual distinction of winding up twice in the NFL record book. His three career safeties tied him for a then all time high, and his 23 fumble recoveries place him third on that list.

He earned All-NFL honors four times (1955, '56, '58 and '59) and was an All-Pro selection ten times (1952-61). He played in nine Pro Bowls (1953-54, '56-62), earning the game's MVP Award and winning the NFL's Best Lineman Award in 1957. Though he never won an NFL championship as a player, he personified the physical, rugged and relentless style of play that was associated with the Steelers' defenses during his era. On October 25, 1964, Stautner's No. 70 jersey was officially retired by President Dan Rooney and the Steelers, and he remains the only player in club history to have received the honor. On September 13, 1969, during his first year of eligibility, Stautner was presented by owner Art Rooney and inducted into the Pro Football Hall of Fame in Canton, Ohio. He was the seventh member in Steelers history to receive the honor.

Following his retirement as a player, Stautner began his career as an NFL assistant coach. He first served as an assistant coach with the Steelers from 1963-64, and with the Washington Redskins in 1965. Stautner was later hired as an assistant coach for the Dallas Cowboys in 1966. He served as the club's defensive line coach under head coach Tom Landry from 1966-72, before adding the duties of defensive coordinator in 1973. Under his direction, the Cowboys consistently fielded excellent defenses, ranking in the NFL's top-10 16 times — including 10 top-five finishes. He was an important influence in the development of All-Pro defensive players such as Bob Lilly, George Andrie, Lee Roy Jordan, Chuck Howley, Harvey Martin, Randy White, Ed "Too Tall" Jones and John Dutton.

The "Doomsday Defense" began to emerge after Stautner's arrival as the defensive line coach in 1966. His defenses helped the club win division titles from 1966-70, but the team could not win a championship. The "Doomsday Defense" finally showed its greatness in 1971, dominating the Miami Dolphins in a 24-3 victory in Super Bowl VI. Stautner's "Doomsday II" would carry Dallas to its second Super Bowl title in 1977, with a 27-10 defeat of the Denver Broncos. His defense forced eight turnovers and earned defensive tackle Randy White and defensive end Harvey Martin the game's Most Valuable Player award.

After coaching on Landry's staff with the Cowboys for 23 seasons, Stautner was without a job when the team was bought by oil man Jerry Jones in February 1989, who replaced Landry with former University of Miami head coach Jimmy Johnson. "Ernie was a wonderful person and a tremendous contributor to the success of the Dallas Cowboys," said Gil Brandt, the Cowboys long-time vice president of personnel development from 1960-88. "He was all about developing football players, and he loved the game. Few people have had a greater impact on the NFL as both a player and a coach."

Stautner remained with the Cowboys through 1989 as a scout but soon found another job, coaching the Dallas Texans of the Arena Football League from 1990-91. From there Stautner returned to the NFL where he served as the defensive line coach with the Denver Broncos from 1991-94. During his time with the Broncos, he coached under both Dan Reeves and Wade Phillips. Leaving the NFL once more, Stautner returned to Germany, where he became the head coach of the Frankfurt Galaxy of NFL Europe from 1995-97. He led the Galaxy to two consecutive World Bowls from 1995-96, winning the championship in 1995.

Stautner had been suffering from Alzheimer's disease since 1998. He had been living in Vail, Colorado, but was hospitalized. He spent his final four days at a nursing home in Carbondale, Colorado, where he died on February 16, 2006 at the age of 80. Numerous former coaches and players attended the funeral mass, including fellow Hall of Famers Lilly, White, Mel Renfro, Tony Dorsett and Rayfield Wright. "He loved all those guys, he loved them all," his wife Jill Stautner told the Associated Press following his death at 1:30 a.m. "If they were willing to work, he loved them all." Services were held at Saint Philip the Apostle Catholic Church in Lewisville, Texas. He is buried at Sacred Heart Cemetery in Rowlett, Texas. Stautner is survived by his wife, Jill, five daughters and six grandchildren.