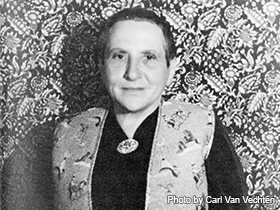 Avant-garde writer and leader of the Lost Generation in post-WWI Paris, Gertrude Stein was born in Allegheny.

Gertrude Stein was born in Allegheny (now Pittsburgh's North Side), Pennsylvania, on February 3, 1874. Her parents were Daniel Stein, a businessman, and Amelia Keyser Stein. Stein spent her early years traveling with her parents in Europe. The family returned to the United States in 1879 and settled in Oakland, CA, where Stein spent the rest of her youth. After her parents died, her mother in 1888 and her father in 1891, Stein's eldest brother, Michael, moved his siblings to San Francisco. Stein moved with her brother Leo and her sister Bertha to Baltimore to live with an aunt soon afterward. Though she never married, Stein did have a lifelong romantic relationship with her secretary Alice B. Toklas.

Stein decided to follow her brother Leo and register at Harvard. She attended the Harvard Annex, precursor to Radcliffe College. She studied with William James, George Santayana, Josiah Royce, and Hugo Munsterburg, among others. She later cited James as the most significant influence during her college years. She entered the Johns Hopkins University Medical School in 1897, but soon realized that she was not enthusiastic about pursuing a career as a physician.

Joining her brother Leo in the Montparnasse district of Paris, Stein eventually resided in Europe. In Paris, Gertrude sought liberation from the restraints of American society that made her feel like an outcast. The Steins' expatriation was not unusual at the time, as many artists, writers, and intellectuals found a more hospitable environment in Europe than in the United States. Stein dubbed them "the Lost Generation." Her occasional writings during her undergraduate years reveal a troubled and depressed young woman unable to see herself fitting into such set roles as wife and mother. She knew that she was a difficult and idiosyncratic author, but proclaimed herself a genius. Stein published her first—and some say her best—book, Three Lives, in 1909. Critics mark The Making of Americans: Being a History of a Family's Progress(1925) as a milestone in her career as an experimentalist.

Stein's reputation as an avant-garde writer is based largely on her difficult and experimental works, which have been collected in eight volumes published by Yale University Press and in other collections. Her reputation as a cultural figure is based more on her impressive circle of friends than it is on her writing. The home she shared with Leo became a popular meeting place for many accomplished and aspiring artists, musicians, and rich expatriates. Gertrude became the center of one of the most important salons in Paris. Her close relationship with Pablo Picasso is commemorated in his 1906 portrait of her, which is now at the New York's Metropolitan Museum of Art. The Beinecke Library at Yale University is the major repository of Stein's manuscripts and correspondence.

Stein has been taken most seriously long after her death. Critics and scholars now apply feminist, structuralist, or deconstructionist theories in an attempt to explain Stein's difficult works. She is remembered today largely as an interesting personality whose works are seldom read. But Gertrude Stein has nonetheless left her stamp upon modern literature. As John Ashbery concluded in ARTnews, "Her structures may be demolished; what remains is a sense of someone's having built."