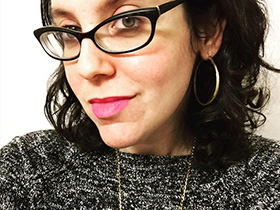 Nicole Steinberg is a Public Poetry Project poet and author of Birds of Tokyo (2009), Clever Little Gang (2014), and other poetry collections.

Nicole Steinberg is a communications professional and poet whose work was selected for the Public Poetry Project of the Pennsylvania Center for the Book in 2016. Her works of poetry include, but are not limited to, Getting Lucky (2013), Glass Actress (2016), and Clever Little Gang (2014), which includes poems prompted by the online dating profiles of OKCupid. She founded and, for six years, hosted the New York reading series Earshot, and edited the anthology dedicated to her hometown, Forgotten Borough: Writers Come to Terms with Queens (2011). Steinberg has held several editorial positions with respected establishments, such as The PEW Center of the Arts & Heritage, and at the time of this writing is the Director of Communications and Brand Management for the City of Philadelphia Mural Arts Program.

Nicole Steinberg was born on August 11, 1982, in Flushing, New York, and is a poet, editor, and director of communications who says she "tend[s] to write a lot about girlhood and womanhood" in her poetry. Steinberg holds a BA in Creative Writing (2004) from Brandeis University and an MFA in Poetry (2006) from The New School. In an interview with creative writer and New School alumna, Dianca London Potts, Steinberg recounts one of her early publications, the sestina "I'm Obsessed with My Wife":

"I was thrilled to appear in McSweeney's," she says. "It was one of my first major publications and it was huge for me."

Her work has since appeared in No Tell Motel, BOMB, Gulf Coast, The Toast, Sixth Finch, Barrelhouse, Powder Keg, and others. Reviews and spotlights on her work have appeared in publications such as The New York Times, Newsweek, The Philadelphia Review of Books, Flavorwire, and more. She published the chapbook Birds of Tokyo in 2009.

In 2011, Steinberg edited the literary anthology about her hometown: Forgotten Borough: Writers Come to Terms with Queens. "[M]y goal from the start," she tells Critical Mass writer Rigoberto Gonz?Ïlez, "[was] to find compelling stories about Queens—what it means to be from Queens and what it means to settle there, instead of another borough." The anthology, in her words, reflects the diversity of the borough, as well as a diversity in genres, spanning everything from sonnets to historical essays. In it, twenty-four contemporary writers reflect on life in Queens. "[T]hey offer a vivid, layered portrait of Queens as a microcosm of America," the publisher's description reads, "where race, ethnicity, class, and industrial growth all influence our collective past, as well as our present and future."

"I think outsiders will be surprised to find how versatile the lifestyles of Queens residents can be," Steinberg says.

Another of her contributions connected to place is Steinberg's participation in the 2012 Guggenheim Museum's stillspotting nyc project. This project, according to its website, was a two-year multidisciplinary project that took the museum's Architecture and Urban Studies programming out into the streets of New York's five boroughs to transform 'stillspots' into public tours, events, or installations featuring the work of architects, artists, designers, composers, and philosophers. The Queens edition of this project, "Transhistoria," featured "transformative personal narratives" in a series that included a story by Steinberg that visitors were able to encounter by visiting a local space related to the story.

Steinberg also founded and hosted New York's Earshot reading series from 2005-2011 in support of emerging writers of all genres, which included bimonthly literary events and a self-published anthology of participants' work, EARSHOT: The First Offenders (May, 2006).

Her first poetry book is Getting Lucky (2013), described on her website as "a collection of sonnets culled from the editorial copy of Lucky, a newsstand publication for fashionistas." Part of the inspiration for the book was her experience in magazine publishing.

"I never worked for a fashion magazine," she tells Potts. "But I did edit at a couple of entertainment magazines." She names poet Bruce Covey as another source of inspiration. "I heard him read two poems...inspired by People magazine's 'Most Beautiful People' issue. He took the editorial copy related to all of the male celebrities and wrote one poem, then another one using editorial copy related to female celebrities. It was astounding to hear the differences in the tone and the language we use to describe the two genders."

In a similar way, Steinberg's poems in Getting Lucky reveal "something powerful about the way we write for women, the way we sell to women, how we see women as consumers, and what we do to attract their collective interest." She also demonstrates her belief that pop culture has a place in literature. "For one thing, it helps people connect, especially those folks who aren't writers. Sometimes I get my biggest response at readings when I talk about celebrities or make a reference to QVC. It might seem throw away to some but for others, it's something to latch onto."

In addition to writing about the female experience, Steinberg is known for writing poems that riff off how we live and communicate online, according to an interview by New York Times writer Anna North. Steinberg has used online 'think piece' titles as poem titles. A think piece, in Steinberg's opinion, is a 500-1,000-word online post in which a personal experience is "aired out" within the framework of a larger cultural context. "It almost is sort of like the evolution of blogging in a way, because you can inject your own experiences and personality into every think piece. It can be very diaristic," she says. The content of these think pieces have little to do with the poems she ends up writing, she clarifies. "...I just have a general interest in the language of the greater media landscape, and how it taps into and informs not only self-identity but also sort of our cultural herd mentality."

Her 2014 chapbook, Undressing, is more personal, containing poems informed by her experiences in adolescence and as a young adult. "For example, I was an obese teenager," she tells Potts. The poem "My Dark, Semitic Wiles," from Undressing, was selected for publication by the Public Poetry Project of the Pennsylvania Center for the Book in 2016.

Furniture Press selected Steinberg's Clever Little Gang for a 2014 4X4 Chapbook Award. She refers to the book as her "sarcastic chapbook," which includes poems based on OKCupid (an online dating site) profile questions with titles such as "What I'm Doing With My Life."

Nicole Steinberg has taught workshops at The New School Summer Writers Colony. As a communications professional, she has held editing positions with TV Guide Magazine, Entertainment Weekly, Bomb Magazine, and The PEW Center of the Arts & Heritage. She has also served as a grantmaker for PEW and at the time of this writing is the Director of Communications and Brand Management for the City of Philadelphia Mural Arts Program.

Philebrity.com reviewers say of Steinberg's 2016 Glass Actress, There's a fight in these poems that is frankly inspiring in the face of garbage-y sameness... you're gonna need poems like this on your side.

To date, Nicole Steinberg lives in Philadelphia, where she owns a home, and has said that her relationships with other writers has had a lasting impact on her life. Her advice to fellow writers is: "Go out with the other writers. ...talk to your fellow writers and get to know them. Also, don't be afraid to start something. ...make those big ideas happen, and stay out late once in a while."