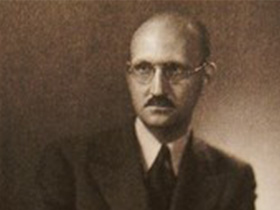 Stern privately published the short story The Greatest Gift: A Christmas Tale(1943), which would become the basis of Frank Capra's It's A Wonderful Life (1946).

Born in Wyalusing, Philip Van Doren Stern served in many literary roles, including editor, fiction author, biographer, compiler, and historian. While the bulk of Stern's work is devoted to Civil War history, he is best known for writing the short story "The Greatest Gift" (1943), adapted for the screen as It's a Wonderful Life (1946).

Philip Van Doren Stern was born in Wyalusing, Pennsylvania, to I.U. and Anne (Van Doren) Stern. He was raised in New Jersey and attended Rutgers University, after which he moved to and lived the better part of his life in New York City.

Stern's involvement in the literary community saw him serve in many roles: editor, novelist, biographer, and lecturer. He was most deeply involved, however, in historical research and writing. Stern was one of the foremost historical authorities on Civil War era people, politics, sociology, and military tactics. Among his many renowned books on those subjects are Robert E. Lee: The Man and the Soldier (1963), They Were There: The Civil War in Action as Seen by Its Combat Artists (1961), and An End to Valor: The Last Days of the Civil War (1958). He is also the compiler of the extensive The Life and Writings of Abraham Lincoln(1940). In addition to nonfiction work on the Civil War era, Stern wrote novels based on the time, one of which, The Drums of Morning (1948), was hailed as "the long overdue fictional answer to Gone With the Wind" by Lewis Gannett of the New York Herald Tribune.

Stern's interests in the military and literature became further entwined during World War II when he served as general manager of the Armed Services Editions, a non-profit organization established by the Council on Books in Wartime that distributed paperback books to active soldiers.

While Stern was most deeply involved in historical writing, he is perhaps best-known for his contributions to the genre of science fiction/fantasy. His most famous biography in that genre was Edgar Allan Poe: Visitor from the Night of Time (1973). In addition, he compiled several anthologies of science fiction writing, including Tales of Horror and the Supernatural(1976) and The Midnight Reader (1948).

His single most famous work, however, grew out of a Christmas message he wrote to some of his close friends in 1943. The following year, the message evolved into a fantasy short story about a mysterious stranger who appears to a suicidal man as he prepares to throw himself from a bridge on Christmas Eve. The man, explaining that he wishes he had never been born, is shown by the stranger exactly what his town would be like if he had never existed. The story, called "The Greatest Gift" (1943), was adapted by director Frank Capra and screenwriters Frances Goodrich and Albert Hackett and became the film It's a Wonderful Life (1946). ("The Greatest Gift" was also adapted for the made-for-TV film It Happened One Christmas (1977).)

Philip Van Doren Stern's literary career spanned over half a century until he retired to Sarasota, Florida. He passed away from cardiac arrest on July 31, 1984, at age 83.