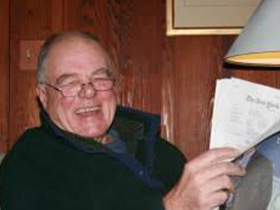 Poet and essayist D.E. Steward was born in Bucks County.

D.E. Steward was born in Bucks County in 1936 and at the time of this writing is now a longtime resident of Princeton, New Jersey. He writes poetry, literary reviews, essays, short stories, and novels, and has over 800 pieces of writing published in renowned literary journals. With 10-plus completed novels and a poetic project he's written month-to-month for over 30 years, Steward continues to produce work at an impressive rate, with 15 pieces commonly in press with publications at a time.

David (D.E.) Steward was born in Doylestown, Bucks County, in 1936, and graduated from George School in Pennsylvania. He later earned a degree in History from Williams College in 1960. Having once lived in Basel, Switzerland; Charlottesville, Virginia; and Tubingen, West Germany; he has been a resident of Princeton, New Jersey, where he has resided since April 1982 and enjoys reading and bicycling. "Reading is everything for a writer," Steward stated in correspondence with the copy editor for the PA Center for the Book. "[F]or me travel follows closely. My rural, semi-impoverished childhood was a significant advantage for me in my generation." Steward writes poetry, literary reviews, essays, short stories, and novels, and has over 800 pieces of writing published in journals such as the Chicago Review, South Dakota Review, Mississippi Review, DIAGRAM, Antioch Review, Beloit Poetry Journal, and several others.

In a 1983 interview with Gretchen Johnsen and Richard Peabody of Gargoyle Magazine, Steward said his plans were "To write as much as possible and publish as much of it as I can. To stay as clean of opportunism as I'm able." With 10-plus completed novels and a poetic project he's written month-to-month for over 30 years, Steward continues to do just that, producing work at an impressive rate with 15 pieces currently in press with publications that include Fjords Review, Hollins Critic, Notre Dame Review, and Misfit Magazine.

"[T]here's a nice regional impact being a lit magazine writer," Steward stated in his 2004 "Self-Interview" featured in the 100th issue of Abbey. He went on to describe the discerning readers of North Dakota, for example, and the thrill of having over 30 pages worth of his poetry printed alongside "poems of the sublime Tang Dynasty poet, Li Po (Li Bai)" in an issue of North Dakota. He also considers "having what editors take printed exactly as written" a plus of publishing in literary magazines.

Steward's poetry has been selected for inclusion in the anthologies, The Vagabond Anthology (1978) and The Poets of New Jersey (2006). In 1981, his first collection of poems, Twenty One Days, was published, and two others followed: Edo (1989) and Torque (2006). He has also published the short story collection, Four Stories (1978), the novel Contact Inhibition (1985), and the nonfiction piece, A Letter to a Writer Down the Line (1987).

His theory on "What makes a writer?":

Heavy reading, curiosity, self-confidence. Severe childhood trauma, left-handedness and attitude are astonishingly common in writers' lives. Solid choices help get you there. I've had bountiful and timely luck. Farm work as a kid, the infantry in Korea, the U.S. Forest Service, good jobs in Europe, a tolerant family in years when you could walk out to any road and hitch to any place in the lower forty-eight and Canada, having an appetite for travel on any terms, having wide open interests and friends. ...

He also acknowledges the reality faced by contemporary writers: "[F]or those tens of thousands every year who take writing courses questing for a freedom window, the odds are similar to a high school player making it to the NBA." Yet the length of Steward's publication list supports his attitude, "[W]hy not go for broke? Banality is dull."

Anomalous Press has published multiple pieces from Steward's serial project that is being written in a month-to-month cycle, or Chroma, as described in issue #10 of the journal. The cycle "attempts to chronicle, to build on, and to enhance some of the realities of the times." To date, the number of months completed over the years is nearing 400.