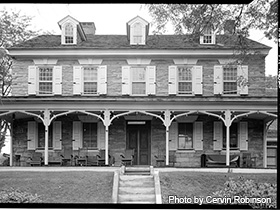 Born in Cologne, Germany, on May 13, 1729, Henry William "Baron" Stiegel would later become known as one of the three most prestigious glassmakers in 18th century America. After he immigrated to Pennsylvania, he worked at an iron furnace in Lancaster, a job that would launch his career. He eventually founded the town of Manheim and created glassware that rivaled that of Great Britain. After finding himself unable to keep up with expenses, he was put in a debtor's prison in Philadelphia. Once freed, he worked various small jobs until his death in 1785.

Henry William Stiegel, born in 1729 in Cologne, Germany, was the son of John Frederick Stiegel and Dorthea Elizabeth (her maiden name remains unknown). After the death of his father, Stiegel, his brother, Anthony, and his mother ventured to America to start a new life in the land of the free. They arrived in Philadelphia, Pennsylvania, on August 31, 1750, and soon after, the ambitious Stiegel discovered the means for his future success.

He fell in love with Elizabeth Huber and they were married in 1752. His new father-in-law, Jacob Huber, was fortunately the owner of the Elizabeth Furnace, which was established in Lancaster, Pennsylvania. Huber began teaching Stiegel his trade in iron working and like the flame in the furnace, Stiegel's passion for the craft intensified. With ambition and big plans, Stiegel took over management of the business starting in 1757. The ironworks continued making primarily items of practical use for the community: kettles, grate bars, boilers, castings, pots, and weights. The real accomplishment of Stiegel during his time at the ironworks was his stoves. Masterfully crafted and designed, they have been described as being "masterpieces of the rococo style in America."

In 1758, after providing Stiegel with two daughters (Elizabeth and Barbara), Elizabeth Huber passed away. Almost eight months later, Stiegel remarried in October to another Elizabeth, who bore him one child, a son named Jacob.

Beginning in 1763, Stiegel became interested in the process of glassmaking. He became the partial owner of the town of Manheim, Pennsylvania, along with Charles and Alexander Stedman, two merchants from Philadelphia who had helped him purchase a second ironworks, Charming Forge. Stiegel eventually paid off the shares of the Stedman brothers and became sole owner of Manheim. The town, named after the area where Stiegel grew up in Germany, was also known as "Stiegeltown" and was about 729 acres. Stiegel hired several glassblowers and set to work. Stiegel valued his workers and their families, and so he had schools built and hired teachers to educate his worker's children. He became a favored community member who was also an accomplished musician, directing the choir at the Trinity Lutheran Church in his town.

In 1764, glassmaking production began and continued for the next five years. Stiegel and his crew worked to create glass following Germanic traditions of style, creating works of green glass bottles, chemical apparatuses, window glass, and tableware. Stiegel, grasping the opportunity to better himself, took a trip in 1763 to England to study advanced methods of glassmaking.

At about the same time, the Townshend Act of 1767, enforced by the British Parliament, was put into place and set a tax on imports of items such as tea, paper, and glass from Great Britain. Colonists, furious at such laws, began instead to turn to American-made products in favor of those from across the Atlantic. Stiegel understood the rising demand for his products and began expanding his selection to fit Anglo-American tastes by creating items that were more sophisticated and durable.

By 1769, Stiegel had enough profits to build a new factory, which he called the American Flint Glass Manufactory. He hired 130 glassblowers and decorators to meet demands. Together, the workers produced wares that were patterned, molded, and of various colors. He also had set up distributing agencies in surrounding states. By 1772, Stiegel was selling just about everything Great Britain could have provided with products that were concomitant to those of luxury: decanters, candlesticks, tumblers, flowerpots, wine glasses, jellies, smelling bottles, salts, cream pots, and inkstands among others. He became one of three well-known glassmakers of the 18th century in America and was recognized as aiding in the consumer revolution. Along with his business, Stiegel made sure to promote other American-made products and supported other merchants as well.

As his business grew, Stiegel displayed his wealth publicly. He was rumored to travel in a lavish carriage drawn by four horses and whenever he was heard coming home to his mansion on Market Square, a watchman would fire off a cannon and a band would play music to welcome him. Although there is no evidence he was noble or of a well distinguished family, his public displays and character soon earned him the nickname of "Baron Stiegel."

Stiegel spread his business across multiple states by advertising throughout Pennsylvania, New York, Massachusetts, and Maryland. But, it appears he spread himself too thin. On May 5, 1774, the glass factory closed after Stiegel had accumulated massive amounts of debt. The pressure to create new works, increased taxes, the difficulty of finding raw materials for glass and wood for the kiln, and the continuing consumer preference for English glassware were all contributing factors to his fall from prestige. He was sent to a debtor's prison in Philadelphia and from there, lived a broken life.

Once he was freed on Christmas Day in 1774, Stiegel tried to find work, but ended up filling various positions across Pennsylvania for short periods of time. Eventually in 1776, Stiegel found himself employed by the new owner of one of the iron-making operations he had once owned. There, in poverty, Baron Stiegel died on January 10, 1785.

Although much has been destroyed, Stiegel glass can be found throughout modern Manheim, including a wheel-engraved lead-glass goblet he made for his daughter's wedding. His memory lives on as well: the school, Manheim Central, continues to use the Baron's persona as their team mascot and symbol. During 2012, the town of Manheim will be celebrating their 250th anniversary by displaying memorabilia and hand-blown glass items of the man who founded the town that once housed his workers. Mayor Eric Philips will present the Baron with a key to the borough during the celebrations.