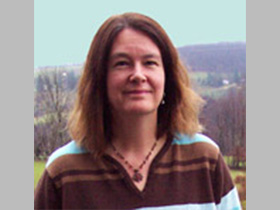 Catherine Stine is an author and illustrator, most known for her first teen novel published in 2005, Refugees. She was born in Philadelphia, Pennsylvania, and she quickly began writing and illustrating stories. Stine majored in painting at the Boston Museum School of Fine Arts and later earned a masters degree in creative writing at the New School University. Catherine Stine currently lives with her family in New York City.

Catherine Stine was born in Philadelphia, Pennsylvania. Her father was a college professor and an educational consultant, and her mother was a law editor. At a very young age, Catherine began writing and illustrating stories. By sixth grade, Stine had created her very own mini-series about children who discovered a secret jungle in their attic.

In college, Stine earned a Bachelor of Fine Arts from Boston Museum School of Fine Arts, where she majored in painting. She continued her education at the New School University (formerly New School of Social Research) in New York City, where she received a Masters of Fine Arts in 2003 in creative writing, with a double focus in writing for children and fiction.

Stine is married to Norris Chumley, an author and inspirational speaker. She lives in New York City with her husband and her two sons. Her hobbies include painting, writing, traveling, and listening to World Music.

Catherine Stine's first published literary work was a teen novel entitled Refugees. It was awarded "Best Book for Teens" by the New York Public Library in 2005, and it is included in the United Nations Study Guide. The book tells the story of two teenagers who flee the deprivation and conflict in their countries, specifically Afghanistan and Pakistan. The book reaches a climax only a few months after the attacks of September 11, 2001. The chapters alternate between the stories of two teens, Dawn and Johar, and the alternation dramatically contrasts the differences between their daily experiences. As the book progresses, the protagonists develop an e-mail friendship where they give each other courage and inspiration to fight through the realities of their situations.

Through the novel, Catherine Stine aimed to inspire young readers to question the current conflicts of our world. In a book review of Stine's Refugees, a Kirkus Reviews contributor commented, "...memorable characters and sudden rare beauty make it impossible not to care about Dawn and Johar's world." Educators use the context of Refugees to encourage discussion between teachers and teens regarding cultural differences and world conflicts.

Catherine Stine has illustrated two books published in 1999: Building Your Baby's Bain: A Parent's Guide to the First Five Years by Heroman and Dodge and her husband's, Norris Chumley, motivational book, The Joy of Weight Loss. Additionally, she has painted cover art for Penguin-Perigee.

Some of Stine's art, specifically her most recent paintings, appear in exhibitions throughout New York City. She held exhibitions at the Sunnen Gallery (1993-1994) and the Margaret Bodell Gallery (2000-2001).

Catherine Stine has hosted book talks at elementary and secondary schools across the east coast. Stine says, "As an artist, I strive to inspire reluctant as well as prolific student writers to 'write as if they are painting scenes with words.'" After a recent visit to a public middle school in Brooklyn, New York, a participating 8th grade teacher remarked, "Catherine Stine is an author whose work touches real lives and experiences of teens living in New York City and beyond. Her book and workshop opened the students' minds to the process of writing, and how writing a novel actually unfolds." Stine likes to think of writing as "painting with words."

Stine recently has been working in conjunction with American Girl Publishing, and in 2010, her book entitled A Girl's Best Friend was published. A Girl's Best Friend is an interactive story where readers get to choose the ending from over 20 options. The book's main character is a girl who loves animals, but when one of her pets is in danger she tries to protect him anyway she can, which may force her friends to leak her big secret. Stine also has recently written short stories for anthologies. Her short story "Birds and Dogs of March" is forthcoming in The Ides Project anthology, which is due out in March 2012.