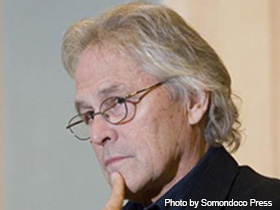 Stitt was the longtime editor of the literary magazine Gettysburg Review between its inception in 1988 and 2016.

Peter Stitt was born in 1940. By the time he and his family arrived in Gettysburg in 1986, Stitt had already built a substantial body of work at several institutions. He was an award-winning editor and founder of the Gettsyburg Review. He died of a glioblastoma brain tumor on May 24, 2018, at the age of 77.

Peter Stitt was born on October 9, 1940, in Minneapolis, Minnesota. His parents were Allison Baker Stitt, a forester, and Josephine Eichhammer Stitt, a housewife. His first marriage was to Judith Hatling, on August 12, 1961. Stitt divorced Hatling on April 16, 1981, and married Jean Straub, a management consultant, on July 6, 1985. He had three children: Peter II, Jon, and one stepson named Justin Redd.

Stitt attended the University of Minnesota, where he earned his BAin 1962 and his MAin 1964. He was associate editor of Minnesota Review between 1963 and 1964. Moving his family south, he earned his PhDin 1970 at the University of North Carolina (UNC) at Chapel Hill. While studying at UNC, he took the position of editor of the Carolina Quarterly from 1967 to 1968. Stitt then taught at Middlebury College, Middlebury, Vermont, as the assistant professor of American literature from 1969 to 1976; the University of Houston, as an associate professor of English from 1976 to 1986; and finally settled in Gettysburg, Pennsylvania, at Gettysburg College, where he wasa professor of English and the founding editor of Gettysburg Review, for which he received the inaugural PEN/Nora Magid Award for Excellence in Editing, since 1986. He was a contributing editor for the Georgia Review from 1982 to 1987.

In addition to contributing articles and reviews to literary journals, Stitt wrote several books, including:The World's Hieroglyphic Beauty: Five American Poets (1985),James Wright: the Heart of the Light (1985), andUncertainty & Plenitude: Five Contemporary Poets (1997). Stitt was a member of numerous organizations, such as the Modern Language Association of America, the Associated Writing Programs, the Academy of American Poets, and Association of Literary Scholars and Critics. He was also a member of the literature panel of National Endowment for the Arts from 1985 to 1986 and 1993 to 1994, and the American literature panel of National Endowment for the Humanities in 1994.

In 2015, Stitt retired from his position at Gettysburg College. He enjoyed visiting Ocean Springs, Mississippi, time with friends and family, and correspondence with former classmates, students, and colleaugues during his retirement. On May 24, 2018, Peter Stitt died of a glioblastoma brain tumor at the age of 77.