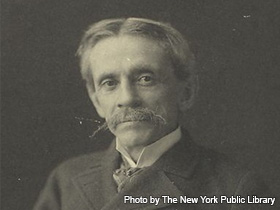 Humorist and novelist Frank Stockton, best known for his work in St. Nicholas Magazine, was born in Blockey Township.

Children's author Frank Richard Stockton was born in Philadelphia, Pennsylvania, in 1834. Like many artists, Stockton ignored parental advice and entered the art world. He had a long-lasting career as an author for children's books, publishing in many of the most prestigious magazines of the time. He died in 1902 in Washington, D.C.

Francis (Frank) Richard Stockton was born in Blockley, Pennsylvania, a township of Philadelphia, on April 5, 1834. His parents were William Smith Stockton, a Methodist minister, superintendent of the Philadelphia Alms House, and writer, and Emily Hepsibeth Drean Stockton, a school administrator. In 1860, Stockton married Marian Edwards Tuttle, a teacher from South Carolina. Stockton lived in the Philadelphia area for most of his life. His later years were spent in New Jersey, West Virginia, and New York.

Stockton was schooled in the Philadelphia Public School System. At Central High School he achieved his first success as a writer by having one his short stories selected as the top entry of a contest by the Boys' and Girls' Journal. In 1852, Stockton ignored his father's advice to study medicine and instead became a wood engraver. Stockton continued to pursue his writing interests and several of his stories were published in various literary magazines, such as the American Courier and the Southern Literary Magazine. As wood engraving illustrations became pass??, Stockton pursued writing on a regular basis. He began to write for Philadelphia newspapers like the Philadelphia Press and the Philadelphia Morning Post. He also submitted stories to humor magazines and children's magazines. In 1867, Stockton's story "Ting-a-Ling," a fantastical tale about a fairy, was published in the Riverside Magazine for Young People, and the story was later published in book form in 1870. After the success of this story, Stockton was asked to become the assistant editor and the chief contributor for the children's section of Hearth and Home. In 1873, Stockton began editing and contributing to St. Nicholas, the prestigious children's magazine. In 1878, Stockton was forced to leave his position at the magazine because of his failing eyesight, which forced him to dictate his stories for the rest of his life. However, his failing eyesight did not stop him from pursuing an expansive literary career.

Stockton's first major success arrived with the 1879 publication of Rudder Grange, a collection of stories based on a married couple and their servant. His most famous work, however, was the short story, "The Lady, or the Tiger?" which was published in 1882 by Century magazine and brought Stockton much acclaim. This story, with its ambiguous ending, has been adapted into a play version, a film version, and addressed by Robert Browning in a poem and by scholars in the Hindu community. In 1887, The Bee Man of Orn and Other Fanciful Tales was published and further helped Stockton earn the reputation as one of the greatest humorists and children's authors of his time. Stockton published most of his works under the title "Frank R. Stockton." However, he was also known to publish works under the pseudonyms "Paul Fort" and "John Lewees," which he derived from the names of his siblings.

Stockton has had two of his works honored with the Lewis Carroll Shelf Award. In 1963, the honor was bestowed upon his fairy tale The Griffin and the Minor Canon, and in 1969, the honor went to The Storytellers Pack: A Frank R. Stockton Reader. During his lifetime, his works also gained him admittance into the Century Club and the Authors Club.

Stockton died of cerebral hemorrhage on April 20, 1902, in Washington D.C. He is buried in the Woodlands Cemetery in Philadelphia, Pennsylvania.