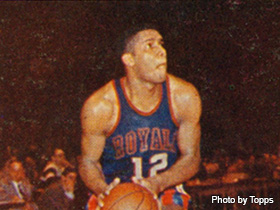 Basketball player Maurice Stokes was born on June 17, 1933, in Rankin, Pennsylvania, just outside of Pittsburgh. There, Stokes lived with his family where he was one of four children. Stokes lived with his parents, his two brothers and his twin sister. At the age of eight, the Stokes family moved close by to the Homewood area of Pittsburgh where he later attended high school at Westinghouse High. Stokes was not always the basketball star that he turned out to be. Instead, Stokes was a late bloomer on the court. Stokes did not start his first two years at Westinghouse; however, he later made a huge impact on the team as they won back-to-back city championships his second two years.

There was someone in Stokes' childhood who made an impact on him throughout his life by the name of Jack Twyman. Stokes and Twyman each grew up in the same area of Pittsburgh; although they were of different races and were enrolled in different high schools. They were familiar with each other because they grew up on the courts together. Stokes and Twyman grew up playing "street ball" together but went their separate ways after high school; only to be reunited down the road. When Stokes' high school career was coming to an end, he started receiving great interest from coaches around the country. Although calls of interest were coming in, Stokes only received ten offers. Some college coaches considered Stokes to be a little too slow for the college game.

With numerous scholarship offers from colleges around the country, Stokes chose St. Francis University as the venue in which he would pursue his basketball career. St. Francis is a small college outside of Pittsburgh located in Loretto, Pennsylvania where Stokes began to play on the men's basketball team his freshman year in 1951. There were many criticisms of Stokes' game as he entered college because of his slowness up and down the court. Maurice Stokes took all the constructive criticism he could get because he enjoyed using it as motivation in order to strive for perfection. As a collegian, Stokes averaged 22.4 points per game during his four standout years at the university. Individually, Stokes did not develop to his full potential until his senior year at St. Francis when he was named Most Valuable Player of the National Invitational Tournament (NIT). This was a special nomination not only because of the prestigious award but because that year Stokes and his teammates finished fourth in the NIT, making Stokes the only player in basketball history to earn that award from a fourth-place team. During his senior year, Stokes was also voted an All-American.

In the record books, Stokes remains St. Francis University's all time leading rebounder with 1,819 rebounds, and holds the runner-up spot in scoring with 2,282 points. The St. Francis Red Flash, also known as the 'Frankies,' ended with a record of 79-30 while Stokes was on the court as a power forward all four years. During his collegiate athletic career, Stokes lead his team to the NIT two times, which, when combined with his standout collegiate statistics, was enough for him to be inducted in the St. Francis University Athletic Hall of Fame. Maurice Stokes' future was set even if the National Basketball Association (NBA) was not a part of it because the famous Harlem Globetrotters and other industrial teams pursued Stokes after his senior season. Stokes' passion and hard work went toward playing in the NBA. The fact that Stokes continued to grow on the basketball court throughout his collegiate career made it easier for him to continue his progress on the professional level.

Maurice Stokes finished his collegiate career sizing at 6'7", and weighing 240 pounds. His collegiate statistics combined with his size clinched his first round draft spot into the NBA. When the 1955 NBA draft finally came, Stokes was picked number two overall by the Rochester Royals. Stokes made an immediate impact on the Royals. During his first game in the league, he accounted for thirty-two points, twenty rebounds and eight assists. During his first season as a Royal in 1955-56, Stokes went on to average an astonishing 16.8 points per game and 16.3 rebounds per game. Rebounding was Maurice Stokes' expertise as he set a new franchise record in his first year during a single game, grabbing thirty-eight rebounds that night. Stokes' first year was so impressive that he was voted the NBA's Rookie of the Year award. All of the constructive criticism paid off according to the well respected Boston Celtics point guard Bob Cousy, who called him "The first great, athletic power forward."

Stokes' friend and companion, Jack Twyman, was also drafted by the Rochester Royals in the second round. Stokes' second season was nothing short of his first. He set an NBA record after grabbing his 1,256th rebound that season which averaged out to be 17.4 rebounds per game. His 331 assists, or 4.6 per game, gave him third place overall in his second season. He also averaged a solid 15.6 points per game. The very next season, as Stokes entered his third year in the NBA, the Rochester Royals moved to Cincinnati where Stokes finished his third year second in rebounding to the well respected Bill Russell as he averaged 18.1 rebounds per game. Stokes finished third again in assists averaging 6.4 per game, and scored an average of 15.6 points per game. Each year Maurice Stokes was in the NBA he was named second-team all-league.

Toward the end of Stokes' third season as a Cincinnati Royal, they played a game at the Minneapolis Lakers on March 12, 1958. Stokes had possession of the basketball and drove through the lane to come in contact with a Lakers player. Stokes was hit awkwardly in the air and landed on his head as he struck the hard wood court. He was knocked out for several minutes until team physicians revived him with smelling salts. He was even was able to return to the game. The playoffs were near and Stokes started to feel some obvious side effects from the fall. A couple days after, Stokes and the Royals lost their playoff opener even though Stokes had a typical above average performance. It was during the plane ride home to Cincinnati when Stokes became feeling seriously ill. Jack Twyman was on the plane sitting next to Stokes as he collapsed into Twyman's arms. After the plane had landed, Stokes was taken to a nearby hospital where he received treatment for his condition. He was unable to move his body for weeks as he lay in a hospital bed in a coma.

The Stokes family was unable to pay the medical expenses and the Cincinnati Royals would not provide financial assistance; which is when Twyman took matters into his own hands and provided information that allowed Stokes to receive workman's compensation in order to pay for the medical bills. This was the least that Twyman did for his past competitor, teammate and future family member. Twyman legally adopted Stokes, in order to take care of him, when Stokes was unconscious inside the hospital. After Stokes had recovered from the coma state, Jack Twyman and his wife Carole would visit Stokes in the hospital every day. Stokes had been diagnosed with post-traumatic encephalopathy which is a brain injury that damaged his motor control center. Stokes was able to regain his state of mind but was left a paraplegic and with difficulty communicating with others. Eventually, more money was needed in order to pay for hospital bills and Twyman came to the rescue again as he structured an exhibition summer game in honor of Maurice Stokes in order to raise money for his cause. The game was held each year at Milton Kutsher's Catskills resort and raised over $250,000 in order to benefit Maurice Stokes. The accident had robbed Stokes of his speech and mobility but countless hours of physical therapy and other medical treatment lead Stokes with the scarce ability to move his limbs and joints. At the age of 36 in 1970, Maurice Stokes suffered from a heart attack that was too severe to survive. Maurice Stokes' request was granted as he was buried back in Pennsylvania at St. Francis.

Soon after the death of Maurice Stokes, St. Francis named their brand new field house after the three-time All-American. The Cincinnati Royals moved on as they relocated their franchise through Kansas City (where they became the Kings) and on to Sacramento. Jack Twyman also moved on as his career ended in 1982 and soon after would be inducted into the Basketball Hall of Fame. Twyman knew, however, that Stokes was a much more suitable candidate for the Hall. Twyman continued to nominate Maurice Stokes for the Basketball Hall of Fame even after Stokes was turned down by voters over several consecutive years.

On April 5, 2004, the voters announced that he was their choice for the Class of 2004 for the Basketball Hall of Fame. During the induction ceremony, Twyman accepted Stokes' awards and said, "Whatever I've done for Maurice, I've gained tenfold. Let me just say, congratulations big fella, you made it." Today, proceeds are still being made by charities and foundations that were developed because of Maurice Stokes. The proceeds are being donated to retired basketball players who are in need, to fund a Maurice Stokes scholarship at his high school, and to maintain a personal Maurice Stokes room at the Basketball Hall of Fame.