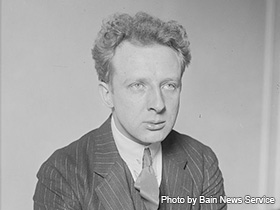 Conductor Leopold Stokowski developed the lush "Philadelphia sound" with the Orchestra from 1912 to 1941.

Born in London in 1882, Leopold Stokowski showed strong musical talents from a young age. After studying music, Stokowski served as organist in several churches before gaining fame as an orchestral conductor. Stokowski became the conductor of the Philadelphia Orchestra in 1912 and turned it into one of the most renowned orchestras in the world. He was known as an innovator, and always created unique performances. He conducted some of the most famous recordings of major orchestral works, and continued to conduct until his death in 1977. He is remembered as one of the greatest American conductors who ever lived.

Conductor Leopold Anthony Stokowski (born Antoni Stanis?Æaw Boles?Æawowicz) was born in London on April 18, 1882. His father was a Polish cabinet maker named Kopernik J??zef Boles?Æawowicz Stokowski and his mother, Annie Marion Stokowski, was of Irish descent. During his youth, he learned to play the piano, violin, and organ with little effort. At the age of thirteen, he became the youngest student to have been admitted to the Royal College of Music. While enrolled, he was very active as a musician in local churches and held positions playing organ and directing choirs. In 1903, He received a Bachelor of Music degree from Queen's College, Oxford, and was appointed principle organist at St. James' Church in London.

In 1905, Stokowski accepted a position at St. Bartholomew's Church in New York. The congregation was fond of Stokowski's uncommon musical selections, but one day he went too far. He was thrown out in 1908 after concluding a service with John Philip Sousa's "Stars and Stripes Forever" as loud as the organ would play. During summers, Stokowski returned to Europe to further his studies in Berlin, Munich, and Paris.

As Stokowski's notoriety increased, he was asked to take over the Philadelphia Orchestra in 1912. Because the orchestra was not very good, the management had no problems when Stokowski made drastic changes to the orchestra. Stokowski took several opportunities to re-seat the orchestra to perform in new ways. Once, the orchestra even performed from behind a curtain! Stokowski was the first to place all of the first and second violins on the left side of the stage together, which is common practice for today's orchestras. Stokowski also instructed string players to use "free bowing" which means that musicians moved their bows in either direction on the strings, and not just how the music would normally have been played with all of the string players bowing in the same direction all the time. Many believe this created a richer, fuller sound which became known as the "Philadelphia Sound."

During Stokowski's tenure with the Philadelphia Orchestra, it grew into one of the most famous orchestras in the world, with one of the most famous conductors. Stokowski gained a movie star-like notoriety and even appeared in films; most notably, Stokowski conducted the Philadelphia Orchestra in Walt Disney's Fantasia. Not only Did Stokowski shake hands with Mickey Mouse on camera and arrange music for the film, but he suggested the title to Disney.

Throughout the rest of Stokowski's time in Philadelphia, he became well known for theatrical elements he added to concerts. Stokowski often had lights set up for concerts that would cast huge shadows of him on the walls of the theater. Stokowski also never conducted with a baton, but with his bare hands. He took liberties with great orchestral masterpieces. He would re-write parts, add percussion, and make other drastic changes to orchestral works before performances if he felt it would add to the music, sometimes to the disapproval of the composer. Namely, Igor Stravinsky was unhappy with Stokowski's changes to parts of "The Rite of Spring" used in Fantasia. Stokowski's personal life also made its way into the news. He was married several times and had an affair with Greta Garbo, a famous Hollywood actress of the time.

Though he had his share of opponents, Stokowski was highly regarded by musicians all around the world. Sir Reginald Goodall, an English conductor known for his opera conducting, said "I don't care what they say about Stokowski. He was good. He could achieve a lovely sound. I learned something from that."

Stokowski sought to combat Nazi propaganda touting the wonders of the Hitler Youth with an artistic statement made by young people of the free world. He announced that he would be auditioning a new "All-American Youth Orchestra." Fifteen thousand young people applied for the orchestra, and finalists were selected after five rounds of auditions. The members represented all 48 states, and toured the US and South America. Stokowski said of the group "I would not exchange this orchestra for any other orchestra in the world. These young people are phenomenal."

Stokowski left Philadelphia in 1941, but continued making conducting appearances all over the world. He became obsessed with finding new technology to record music. His recordings of some of the great orchestral masterpieces are considered standards by the top musicians and critics of the world;His performance with the American Symphony Orchestra of Charles Ives' Fourth Symphony won the 1965 Grammy Award for the Best Classical Recording. At the age of 94, he signed a contract with Columbia Records, but he died a year later. He is buried at Marylebone Cemetery, East Finchley in the north of London. Today, he is remembered as one of the greatest conductors to ever live. Critics called him "brilliant, a powerhouse, and a madman." Stokowski would simply want to be remembered as an artist. As he once told an audience, "A painter paints his pictures on canvas. But musicians paint their pictures on silence. We provide the music, and you provide the silence."