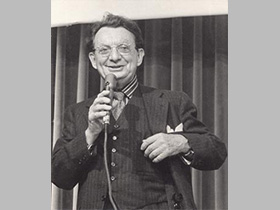 Isador Feinstein was born in Philadelphia in 1907.Hewas a journalist, editor, and author. Through his school years he thrived on feverishly reading novels and vocalizing radical thoughts towards current events. At the age of 15 he started a radical newspaper. Because he continued his leftist stance throughout his career, he was monitored by the Senate Internal Security Subcommittee for being a possible Communist supporter. His main contribution to the field of journalism was the thoroughness in his investigative reporting through the use of government documents. He continued to publish his radical thinking in many publications throughout his life. He died in 1989.

Isador Feinstein was born to parents Bernard and Kathy (Novack) Feinstein on December 24, 1907, in Philadelphia, Pennsylvania. He lived there for three years before moving to Indiana due to multiple disputes between Feinstein's father and his in-laws, the Novacks. In 1912, the Feinstein family moved back east and settled in Haddonfield, New Jersey, where they opened a dry goods store. Young Isador Feinstein began working as a cashier as soon as he was old enough to use the register. Isador, called "Izzy" by family and friends, was the eldest of four children: Marc, Lou, and Judy.

In his school years, Feinstein was very much the loner and misfit. He was the often the target of taunts like "four eyes," due to his coke-bottle glasses, and "bookworm," due to his intense, insatiable hunger for literature. Although Feinstein's knowledge of advanced and obscure literature was extensive even as a school boy, this knowledge did not translate to success in mastering his school lessons. Feinstein finished third to the last in his high school class. His later explanation for his poor grades in high school and his withdrawal from the University of Pennsylvania was that school got in the way of his reading.

Feinstein's revered authors, like Baruch Spinoza, seemed to contain ideas that advocated fighting against the ills of capitalism and political corruption, which planted the seeds of young radicalism in Feinstein's mind. These ideas caused him to create his own newspaper, called The Progress, at the age of 14. In his newspaper, he proclaimed his stance on such political debates as Gandhi's fight to free India and Woodrow Wilson's peace plan. Although his newspaper failed after three issues, at the age of 15 Feinstein was offered a job at the Camden Courier as a Haddonfield correspondent. This occurred after a chance meeting with the publisher's wife while he was working at his family's dry goods emporium. The publisher's wife, Jil Lit Stern, was so impressed by Feinstein's immense knowledge of literature and liberal current events that she insisted her husband hire him to work for the paper. This started his reputation for being one of the famous muckrakers of the time.

At the age of 21, he married Esther Roisman in the summer of 1929. They had three children: Celia, Jeremy, and Christopher. After working for the Camden Courier in his boyhood and for The Philadelphia Inquirer during his stint in college, Feinstein was familiar with newspaper writing and had a talent for scouring through government documents in order to prove the accuracy of his articles.

The 1930s were the most pivotal years in Feinstein's career. In 1933, Feinstein was working for the New York Post, in which he supported Roosevelt's New Deal policy. The Depression proved to be an ennervating time for liberal writers whose previous warnings of big business and corporations had fallen on deaf ears. Leftist supporters, including Feinstein, believed that a reconstruction of society was possible, and the writing of this time mirrored the new ideas that flourished. Feinstein published his first book in 1937, The Court Disposes, which was a critical assessment of the Supreme Court's decision to block the progress of the New Deal reformation policy. In 1937, Feinstein changed his name to I.F. Stone, which was a decision he made to separate himself from the Semitic name of Feinstein, which he later regreted.

Stone left the New York Post in 1939 to work in Washington as an associate editor for The Nation, a weekly periodical self-described as a "flagship of the left" due to its coverage of current politics from a leftist perspective. During his employment at The Nation he was devoted to the coverage of the Jews in Nazi Germany, commenting that it was "a murder of a people...so appalling... that men would shudder of at its horrors for centuries to come." His second book, Business as Unusual, was published in 1941, and it confronted the country's inability to properly prepare for World War II. His third book, Underground to Palestine, was published in 1946, and it dealt with the migration of the Eastern European Jews after World War II.

In the 1953, Stone created his own political newspaper titled, I. F. Stone's Weekly. He campaigned against he conservative corruption taking place in the United States. One such example was Stone's condemnation of McCarthyism as an unjust, unconstitutional political practice. His extreme leftist political position and his reputation of anti-McCarthyism led Stone to be "on the Senate Internal Security Subcommittee list of the eighty-two 'most active and typical sponsors of Communist-front organizations," according to Myra MacPherson. Stone's constant and compelling criticism of McCarthy and his practices aided in ending the Communist witch hunts that took place throughout the United States. Due to Stone's talent for scouring seemingly meaningless documents, he was able to fuel the media with information they would not have found on their own. For instance, his reporting on Richard Nixon's paranoid tendencies provided yet another angle for the journalists to speculate over. The technique he used to make this discovery paved the way for other journalists to follow Stone's example of investigative reporting. He disregarded the government officials, whom he claimed never spoke the truth. He headed straight for the government documents, since reports are a tangible source that can be used to question the government directly.

He had heart attack in 1969, and he slowed down with his work. I.F. Stone's Weekly became I.F. Stone's Bi-Weekly. His newsletter in the 1960's mainly criticized the U.S. involvement in the Vietnam War. The popularity of the bi-weekly periodical is portrayed through its continued circulation to 70,000 subscribers, until 1971 when publication ceased due to the Stone's failing eyesight.

During his retirement, I.F. Stone studied Ancient Greek in order to uncover the secrets surrounding the prosecution and death of Socrates. His book The Trial of Socrates was published in 1988, and it is Stone's attempt to identify the reason that the Athenian government would kill Socrates, a seventy year old man and the most famous philosopher of the time.

I.F. Stone died on June 18, 1989 of a heart attack in a hospital in Boston, Massachusetts.

Stone is remembered for his relentlessness in exposing the government's abuse of power. This is embodied in his famous quotation, "If you want to know about governments, all you have to know is two words, 'governments lie.'" This credo, along with his belief that he could master any subject through dedication and research, served as a template for lesser muckrakers of the time.

When discussing Stone's importance to the journalism field, MacPherson, author of the book "All Governments Lie": The Life and Times of Rebel Journalist I.F. Stone, said, "[Stone] never stopped praising the American freedoms that allowed him to speak and to think as he did. That is why he fought so hard against those who were bent on tarnishing them."

There have been many posthumous allegations made against I.F. Stone's loyalty to America due to the newly released tapes of conversations between Soviet spymasters and their American spies. Many people believe I.F. Stone was a Soviet spy due to his heavy involvement and sponsorship of socialist ideas and leftist beliefs. These tapes failed to provide valid results to implicate Stone as a spy. All allegations against him have been discredited, though some critics still hold steadfast to their own suspicions.