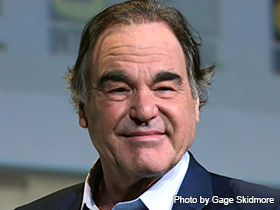 Acclaimed filmmaker and screenwriter Oliver Stone was born in New York City on September 15, 1946. As a teenager, Stone attended The Hill School in Pottstown, Pennsylvania. After dropping out of Yale University and joining the army, Stone received a Bachelor of Fine Arts degree from the New York University Film School. As a screenwriter and director, Stone focuses on human interest and historical stories. Stone, who has received Academy Awards for his work in motion pictures, is best known for writing and directing the films Scarface, Platoon, JFK, and Natural Born Killers. Currently, Stone lives and works in Los Angeles.

Born in New York City on September 15, 1946, Oliver Stone experienced an affluent upbringing; Stone's father, Louis, worked as a successful stockbroker, and his mother Jacqueline (Goddet) Stone was a Manhattan socialite. The Stone's wealthy lifestyle required that nannies care for young Oliver, and during summers he was sent to France to visit his grandparents. An ambitious child, Stone enjoyed writing and directing puppet shows. At age nine, he began compiling his first book, a story about his childhood. When he was a teenager, his parents sent him to an elite, all boys boarding school, The Hill School, located in Pottstown, Pennsylvania, where James Michener once taught English. It was there that Stone was introduced to fellow classmate, writer Tobias Wolff. The school provided a structured environment without television and a curriculum that included involvement in sports. In interviews, Stone has said that he believes his experience at the school gave him the discipline required to write successful screenplays.

In 1962, after graduating from The Hill School, Stone attended Yale University, but following his freshman year, he felt compelled to leave Connecticut and moved to Saigon to work as a schoolteacher. The Vietnam War had just begun, and Stone, feeling listless after a brief period teaching in Vietnam, decided to seek work in the Merchant Marines. The job required that Stone live in Guadalajara, Mexico. While in Latin America, he started to write A Child's Night Dream, a novel about South Vietnam. Feeling passionately committed to writing, Stone wrote 300 pages in ten days.

Returning to the United States, Stone re-enrolled at Yale University but, again, withdrew after failing courses because he spent his study time working on his book. Unfortunately, after completing the project, publishers rejected Stone's novel. Disappointed, Stone began searching for a new vocation. Stone turned to the U.S. government for a solution and, in 1967, joined the U.S. Army. The service sent Stone to the front lines of Vietnam. During combat, where Stone received several injuries but survived. Because of his perseverance and bravery, the army honored Stone with multiple awards, specifically a Bronze Star and a Purple Heart with an Oak Leaf Cluster. In 1968, after serving duty for 15 months, Stone returned to New York. With financial support from the U.S. Army, Stone decided to attend The New York University Film School. It was there that Stone fused his passion for writing with cinema. Stone began making short films and was introduced to a mentor, Martin Scorsese. In 1974, after receiving a Bachelor of Fine Arts degree from the New York University Film School, Stone wrote a screenplay entitled Seizure and was hired to direct the film. Following the movie's release, Stone was asked to write another screenplay based on the life of Billy Hayes, entitled Midnight Express. The film's violence led to mixed reviews, which helped to create a name for Oliver Stone as a controversial and noteworthy filmmaker. In 1978, the Midnight Express screenplay won Stone an Oscar, a Writers Guild Award, and a Golden Globe.

The controversy surrounding Midnight Express started Stone on the path that led to his greatest literary and cinematic contributions. Merging personal experience and universal human struggles, Stone continued writing screenplays. In 1981, Stone wrote and directed a horror film, The Hand, based on Marc Brandel's novel The Lizard's Tail. Unfortunately, the film failed to please audiences, and Stone, unable to secure a job in the States, moved to Paris, France. In Europe, Stone wrote Scarface a screenplay about drug trafficking. Again, reviews of the film were mixed and many critics faulted Stone for the film's excessive violence. Stone, enamored with the gangster genre, proceeded to write another film about drug trafficking entitled, Year of the Dragon. The movie was not successful in theaters, and as a result, Stone could not find support for Platoon, a screenplay based on his experiences in the Vietnam War.

Eventually Stone acquired financial support for a screenplay entitled Salvador, and that same year a production company agreed to finance Platoon. In 1986, the film, possibly Stone's best-known motion picture, opened at box offices nationwide. In 1987, Stone received an Academy Award and Golden Globe for Platoon. Following Platoon's success, Stone continued to write and direct films such as Wall Street, Talk Radio, and Born on the Fourth of July. In 1991 Stone explored music history in The Doors, a film that focused on the life of rock star Jim Morrison. Stone also expounded upon conspiracy theory in the controversial movie JFK. In the early 1990s, Stone bought screenwriter Quentin Tarantino's script and rewrote the film Natural Born Killers, a movie that offers social commentary on media and violence. In 1995, Stone returned to historical and presidential themes, releasing the film Nixon. Exploring personal interests, and possibly connected to an appreciation of sports that was cultivated at The Hill School, Stone wrote and directed Any Given Sunday, a film about American football. In 2004, after the success of Any Given Sunday, Warner Brothers Studios released Alexander, a film examining the life of Alexander the Great.

Today, Oliver Stone, one of the twenty-first century's most noteworthy screenwriters, continues to write and direct films that invite criticism and provoke controversy. He currently lives and works in Los Angeles.