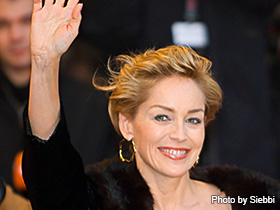 Sharon Stone was born in Meadville, Pennsylvania on March 10, 1958. She began modeling for Ford Modeling Agency, but decided her passion was acting. Her first movie, Stardust Memories, put her on the map as an actress. Stone was in multiple sitcoms, but her first big break was the movie Total Recall. Shortly after, she posed nude in Playboy magazine. No stranger to baring all, she exposed her lower half in her most successful movie, Basic Instinct. She was married twice and divorced twice and has three adopted boys. She is still acting and currently lives in Beverly Hills, California.

Sharon Vonne Stone was born on March 10, 1958, in Meadville, Pennsylvania. She was the second of four children, born to Joseph and Dorothy Stone. Stone attended Saegertown High School, but did not stay long. She was so brilliant, with an IQ of 154, that at just 15-years-old, she accepted a scholarship to Edinboro University of Pennsylvania. She studied creative writing and fine arts there. Stone described herself as "a nerdy, ugly duckling." She said, "I was never a kid. I walked and talked at ten months. I started school in the second grade when I was five, a real weird, academically driven kid, not at all interested in being social. Recess was a drag until I realized I didn't have to play, that I could lean up against a wall and read."

Seeing her daughter's potential, Joseph and Dorothy expected her to far exceed their blue-collar lifestyle. So when beauty pageant promoters at a local fair told Stone to pursue modeling, she moved in with her aunt in New Jersey to do just that. After only four days, she signed with Ford Modeling Agency in New York. Stone was featured in television commercials, magazine layouts, and billboard campaigns. She did advertisements for Burger King, Clairol, Maybelline, and most memorably, Charlie perfume. However, she was not satisfied with her work and wanted to try acting. She landed her first role in Woody Allen's 1980s film, Stardust Memories. She was onscreen for about two minutes as a beautiful woman seen from a moving train.

Four years later, Stone married television producer Michael Greenberg. Her career began to look promising when she played Ryan O'Neal's conniving girlfriend in Irreconcilable Differences. That positive boost for her career was short-lived when she starred in such bombs as Deadly Blessing, King Solomon's Mines and 1987's Police Academy 4: Citizens on Patrol. Around the same time, Stone was also breaking into the television scene, appearing in such shows as Remington Steele, Magnum P.I.,and T.J. Hooker. Her roles hardly aided her career, which was just not taking off. To make matters worse, Stone's marriage was not working out. She and Greenberg divorced after just three years of marriage.

1990 was a very important year for Stone's career. She had her first big break when she played the wife of Arnold Schwarzenegger in Paul Verhoeven's sci-fi movie, Total Recall. Two months after the movie was released, Stone was featured in Playboy magazine. She said she did it because she needed the money. "I had just remodeled my house. I was broke. I needed the bread."

Just when her career began to take off, Stone was involved in a very serious car accident. She was diagnosed with a concussion, a dislocated shoulder and jaw, broken ribs, and three compressed disks in her back.

I knew that we were going to do this leg-crossing thing and I knew that we were going to allude to the concept that I was nude, but I did not think that you would see my vagina in the scene. Later, when I saw it in the screening I was shocked. I think seeing it in a room full of strangers was so disrespectful and so shocking, so I went into the booth and slapped [Paul Verhoeven] and left.

Nonetheless, she was awarded Best Female Performance and Most Desirable Female during the MTV Movie Awards. She was also nominated for Best Actress in the Saturn Awards and Best Performance by an Actress in a Motion Picture for the Golden Globes.

The next few years did little to help Stone's career flourish. She starred in flops such as Sliver, Intersection, and The Quick and the Dead, which was produced by her own production company, Chaos.

Luckily, 1995 shaped up to be a successful year for Stone. She received a Best Actress Oscar nomination for her role in Martin Scorsese's Casino, in which she played a beautiful, unstable Vegas hustler, who got romantically involved with Robert De Niro. She won Best Female Performance from the MTV Movie Awards and also took home a Golden Globe for Best Actress in a Motion Picture. In November of 1995, Stone received her own star on the Hollywood Walk of Fame, located at 6925 Hollywood Blvd. She was also chosen by Empire Magazine as one of the 100 Sexiest Stars in Film History, and two years later, as one of the Top 100 Movie Stars of All Time.

In the height of her fame, Stone managed to find love with the editor of the San Francisco Chronicle, Phil Bronstein. The couple married on February 14, 1998. Later that year, Stone took her career in a different direction. She reunited with Woody Allen while making the movie Antz. She voiced the part of Princess Bala. Ironically, a few months after the release of this PG-Rated movie, Playboy rated her among the 25 sexiest stars of the century.

In 2000, Stone and Bronstein adopted a boy named Roan Joseph. That same year, Stone played Ellen DeGeneres' lesbian lover in If These Walls Could Talk 2. She was later awarded a humanitarian award from the Human Rights Campaign for her work in the movie.

A year later, Stone was rushed to the hospital after suffering a brain aneurysm. She was released a week later and completed her recovery at her home. But as usual, Stone did not stay out of work for long. She co-starred with Dennis Quaid in the thriller Cold Creek Manor.

In January of 2004, Stone and Bronstein ended their marriage of six years. During the same year, she won an Emmy Award for Outstanding Guest Actress in a Drama Series for the television show, The Practice. In April, Stone received the National Center for Lesbian Rights Spirit Award for her support and involvement with gay and lesbian organizations. She was also featured in the less than popular action movie, Catwoman.

In May of 2005, at 47 years old, Stone adopted a baby boy. She named him Laird Vonne Stone. The addition did not keep her away from the spotlight for long. A year later, she starred in the sequel Basic Instinct 2: Risk Addiction, which was referred to as a "cinema disaster." The next movie she was cast in, however, was nominated for two Golden Globes. She played a beautician married to William H. Macy in Emilio Estevez's Bobby. In June, Stone adopted another boy, Quinn Stone. She currently resides in Beverly Hills, California, and owns a ranch in New Zealand.

Photo Credit: Siebbi. "Sharon Stone at the Premiere of "When a man falls in the forest" at the Berlinale Palast." 39114. Photograph. Licensed under CC BY-NC-SA 2.0. Cropped to 4x3. Source: Wikimedia. Marlene-Dietrich-Platz, Berlin.