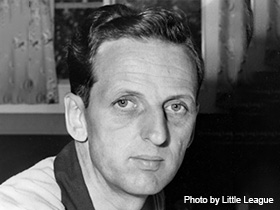 Carl Edwin Stotz was born in Williamsport, Pennsylvania, in 1910. By his early 20s he was working for Pure Oil Company as a clerk, supporting his wife, Grayce Ake and his first of two daughters, Monya Lee. To pass his time, he played ball in his backyard with his sister's two sons, Harold "Major" and Jimmy Gehron. While playing with the two boys one afternoon, Stotz tripped over the roots of a lilac bush as he chased after a wild pitch. Sitting down on the back porch to nurse his wounds, Stotz had an epiphany that would forever change the lives of 11- and 12-year-old boys and their families across the world. In Stotz's famous quote, as cited in Van Auken's Play Ball! The Story of Little League Baseball, he expresses his vision to his two nephews:

How would you boys like to play on a baseball team? How would you like to play in uniforms, just like the major-league players use? With real equipment- a fresh supply of balls and bats, with catcher's gear. Umpires would call the games, so arguments about balls and strikes, catch or no catch, fair or foul, would not interrupt play. Coaches would teach players. Someone would keep score. At the end of the year, the best teams would play for the championship of the league. What do you think of that, boys?

It was from this vision that Little League got its start by Stotz, who gathered eight- to 12-year-olds in the Williamsport area to play on one of three teams. Lycoming Dairy, Lundy Lumber, and Jumbo Pretzel were the first official sponsors (and subsequently, first team names) for Little League, and were managed by Stotz and his two brothers-in-law, George and Bert Bebble, respectively. However, it was only through Stotz's diligence that he got these sponsors, as he was rejected 56 times before Lycoming Dairy agreed to become the first sponsor of Little League.

Because the name "Junior League" was already taken by a women's organization, Stotz was unsure as to what he wanted the official name of this new league to be. He thought of "Little League," as he wanted the name to resemble major league, but did not want the "Little" to be in reference to the boys. Bill Kehoe, a sports editor for the Williamsport newspaper, The Grit, settled the matter when he told Stotz he thought the name was perfect, and convinced Stotz to go with it. Unfortunately, Stotz's boys were still missing one important component: uniforms.

During World War II, the government was purchasing uniform material and sporting-good items for use in military-training camps, which made it difficult to purchase uniforms for three teams. Regardless, Stotz pulled through and managed to find three different sets of ten uniforms for his boys. In addition to the uniforms, Stotz designed an emblem for the boys to wear that identified the league. The patch included a baseball diamond and a waving flag inside a keystone, to represent Pennsylvania as the state where Little League was founded. A slightly modified version has been in use ever since. Now with a name and uniforms, Stotz officially had Little League baseball in business.

Stotz modified existing rules in Major League Baseball to suit the physical abilities of young boys. A 60-foot distance from base to base, and a 38-foot distance between mound and plate were now the new dimensions, so the boys would not have as far to run or pitch. These distances are equivalent to about 2/3 of that used in the major leagues. In addition, home plate and the pitcher's rubber were modified to smaller dimensions. Stotz took the liberty of making the plate, rubber, and bases by himself. He also implemented a 'no stealing' rule. This was put into effect because of the inability of a young catcher to throw out a boy stealing second base. There would also be no more attempts to reach first base on a dropped third strike. This would force the boys to earn their runs as opposed to scoring due to an error on the other team. Finally, to accommodate the boys' physical endurance, the number of innings played was reduced from nine to six. The schedule was also modified, now arranged in halves. Stotz reasoned that this would allow a slow-starting team to improve and have a shot at the title at the end of the season.

In 1940, the first official meeting of the Little League Board of Directors was held. This meeting was composed of all the team managers and their wives. Stotz was appointed president and commissioner of the league during this session. Throughout this meeting, the members also discussed the objectives of Little League and the different rules that would be implemented regarding such issues as residency requirements for boys wishing to play in Little League. Due to an overwhelming amount of boys interested in trying out for Little League, the Board settled on established school-attendance boundaries to determine who would be eligible for what team. The Board then also narrowed the age range to include only 11- and 12-year-olds.

By 1943, Little League had its own field on Memorial Avenue and Demorest Street, cleared and designed by Stotz and numerous volunteers in the community. In 1947, Stotz and the Board of Directors agreed to organize a tournament for all the leagues to participate in at the end of the season, the National Little League Tournament. The various leagues competed in the National Little League Tournament at Memorial Field from 1947 to 1959. The name of the tournament was changed to Little League World Series in 1949, when the site of the tournament was also relocated to the new stadium, Howard J. Lamade Stadium in South Williamsport.

From the start of Little League in 1938, Stotz remained loyal to the league and its boys, recruiting state and nationwide, spreading the word of Little League and teaching those who would listen how to run such programs. His passion for providing these young boys with the opportunity to play and learn while keeping them out of trouble and off the streets was well-received in the community of Williamsport, and was soon shared worldwide. A local church in Williamsport referred to Little League as "the greatest remedy for juvenile delinquency ever discovered in this city," as stated in Stotz's A Promise Kept: The Story of the Found of Little League Baseball.

Stotz's role as commissioner and president of Little League baseball did not last very long. In 1952, Peter J. McGovern was appointed full-time president of Little League, as Stotz was on overload with the demands of his second job at Confair Bottling and traveling to promote Little League. It was at this time that Stotz accepted a ten-year contract to promote Little League nationally for a $100,000 paycheck from U.S. Rubber, now Little League's official sponsor. Stotz remained commissioner while promoting Little League, but quit his job at Confair Bottling. While Stotz was traveling, McGovern was issuing commercialized endorsement contracts and increasing the number of players on each team roster to include more boys. Stotz argued that the league needed more teams, not more players on each team. The boys needed more playing time and more practice. Adding more players to each team would only decrease everyone's playing time and, inevitably, everyone's talent due to lack of practice time. In addition, Stotz viewed the Little League as having become an impersonal, commercial enterprise and was resentful that Little League was being run by New York businessmen and not by volunteers from Williamsport.

These differences in opinion on how to run Little League, in addition to many others, were the demise of Carl Stotz and of any future role for him in Little League. On November 21, 1955, Stotz "fired the first shot of Little League's civil war." Down to his last straw, Stotz locked the office doors in an attempt to reclaim the program. This proved ineffective, as the Board voted to remove the padlock from the door and Stotz from his position as commissioner. The Little League continued without Stotz.

Although Stotz filed a lawsuit against Little League to try and restore its values and keep it from being exploited, his efforts did not prevail, and Stotz was forced to step down. Through an out-of-court settlement, the "New York businessmen" were left in charge. However, before he settled, Stotz had three stipulations: Little League would remain in Williamsport, there would be more voting representation on the board of directors by field volunteers, and Little League Baseball would not contest his status as founder of the program.

Soon after he was forced to leave Little League, Stotz opened a new office for his "Original Little League," as he termed it. The Little League readily sought an injunction against Stotz to prevent him from establishing a rival league. This resulted in Stotz parting with the program permanently. Though invited to Little League World Series and the Little League museum on numerous occasions, Stotz declined all invitations.

While his time with the Little League may have been cut short, Stotz still felt that what little time he had with the program had a profound effect on boys across the world. In his work, A Promise Kept: The Story of the Founding of Little League Baseball, Stotz talks about his years with Little League with no regrets.

During my years of travel around the country for Little League, I was frequently on the road at the time children were walking to country schools. Whenever I saw a boy with books, lunch box, ball glove, and wearing a baseball cap, I felt amply repaid for my efforts to help others like him get the chance to play under conditions suited to their size and ability.

Certainly Stotz's efforts have not gone unnoticed, as Little League is now found in 63 countries and on every continent. It takes a determined and compassionate man to be able to take a league with 3 teams and thirty boys and transform it into a league that would eventually involve over180,000 teams with a million boys.

After parting ways with the program, Stotz remained in Williamsport with his family, which now included his second daughter, Karen. He served as a tax collector for the remainder of his time there. In 1974, Memorial Field was renamed Carl Stotz Field, in honor of the founder of Little League Baseball. Stotz loved to tell his story of Little League to anyone who would listen, and continued to do so until his death. At 82, he died of a heart attack on June 4,1992, in Williamsport Hospital. Stotz is survived by his wife, two daughters, his sister, Julia Hipple, and four grandchildren.