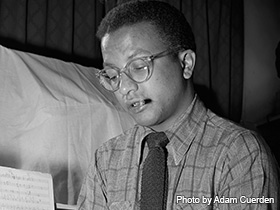 Growing up in Homewood, composer and pianist Billy Strayhorn would forge a lifelong collaboration with Duke Ellington.

Born on November 29, 1915, Billy Strayhorn grew up in the Homewood district of Pittsburgh. During his adolescence, he learned to play the piano and studied classical music in both private lessons and at the Pittsburgh Musical Institute. In 1938, Strayhorn met Duke Ellington, and accepted his invitation to join his well-known jazz ensemble. Strayhorn moved to New York where he worked closely with Ellington for the next three decades, creating an inseparable friendship and hundreds of arrangements, suites, and other pieces of musical mastery. Strayhorn died in 1967 from complications relating to cancer of the esophagus.

Billy "Swee' pea" Strayhorn was born to Lillian and James Nathaniel Strayhorn on November 29, 1915, in Dayton, Ohio. The youngest Strayhorn was born with rickets and given a grim prognosis. Lillian Strayhorn, who had already lost two children, rejected the standard medical treatment for the disease in favor of a less stressful home cure. Her cure eventually worked, and the young Strayhorn's legs began to straighten as he grew. A graduate of a two-year program at Shaw University, Lillian Strayhorn was a well-raised and educated woman. James Strayhorn dropped out of school after eighth grade but was exposed to music and art throughout his childhood by his mother, a pianist and art lover. The family moved several times in the early years of Billy Strayhorn's life, finally settling in Pittsburgh by 1920 where there were many jobs available for James Strayhorn.

Billy Strayhorn was born a musician. While his family in Pittsburgh did not own a piano, he began playing his grandmother's as soon as he was tall enough to reach the keys. Strayhorn took on several small jobs and saved his money until he was able to buy a second-hand piano. He also paid for all of his sheet music as well as private piano lessons where he studied classical music. Strayhorn attended Westinghouse High School and played for the school orchestra as first pianist. After graduating from high school, Strayhorn enrolled in the Pittsburgh Musical Institution where he continued to study classical music. Once again, he paid for his education through small jobs, working as a soda jerk amongst other positions.

A budding pianist, Strayhorn immersed himself in the Pittsburgh music scene, writing and performing his own music in the city's music venues. He completed the song "Lush Life," at the age of 21 in 1936, later released on the 1996 album entitled Lush Life: The Billy Strayhorn Songbook. David Hajdu, author of Strayhorn's biography entitled Lush Life, describes the song as "distinguished by a probing concerto-style exploration of its principle key (D-flat), some nicely surprising harmonic turns, melodic lines of often odd yet utterly natural-seeming duration, and virtually no repetition." As quoted in Hajdu's book, the song's lyrics reveal some of Strayhorn's personality:

A week in Paris will ease the bite of it.
All I care is to smile in spite of it.
I'll forget you, I will
While yet you are still
Burning inside my brain.
Romance is mush
Stifling those who strive.
I'll live a lush life in some small dive
And there I'll be while I rot with the rest
​Of those whose lives are lonely, too.


In interviews, Strayhorn was unclear about the true meaning behind the song. However, "Lush Life" betrays his cynical views of romance, possibly as a result of an unrequited love. It also exposes a longing for a life beyond his means in Pittsburgh, as he sings about spending time in Paris. Strayhorn would later live out this fantasy when living in Paris for a short time. Since its release, "Lush Life" has been performed by Nat "King" Cole, John Coltrane, and several others. It has become one of Strayhorn's most well-known songs.

In December 1938, Duke Ellington was in Pittsburgh performing at the Stanley Theater. A friend of Strayhorn arranged for him to play for Ellington after the concert. Strayhorn played several of Ellington's songs and some of his own work, including "Something to Live For," also later released on his Lush Life album. Ellington became increasingly excited about Strayhorn's talent, calling in members of his band to listen to Strayhorn play. A few days later, Ellington offered Strayhorn a position in the band. The job, however, was undefined as Ellington already had a piano player in the band. Nevertheless, the opportunity to work with Ellington, who was a well-known musician by that time, was a golden one for Strayhorn.

In January 1939, a 22-year-old Strayhorn moved to New York to work with Ellington. After temporarily living in the YMCA, Strayhorn moved into Ellington's apartment in Harlem. For the next three decades, the pair was practically inseparable. Ellington, as quoted by the Billy Strayhorn: A Legend in Jazz website, later described Strayhorn as "my right arm, my left arm, all the eyes in the back of my head, my brainwaves in his head, and his in mine." Ellington accepted Strayhorn for himself, supporting him as one of the few openly homosexual jazz musicians at the time.

According to Walter Van de Leur in his biography of Strayhorn entitled Something to Live For, Strayhorn and Ellington collaborated on over five hundred recorded compositions and arrangements. Some of the best known are "Take the 'A' Train," "Chelsea Bridge," and "Clementine," all represented on the Lush Life album. "Lotus Blossom," later recorded on Ellington's and His Mother Called Him Bill album, was also very popular. Strayhorn and Ellington also worked together on several instrumental suites, including a rendition of the "Nutcracker Suite," later recorded on the Duke Ellington: Three Suites album, and the "Queen's Suite" performed exclusively for the Queen of England and later recorded on The Ellington Suites album.Furthermore, they dabbled in the theater. Their history of jazz communicated in music and dance entitled "A Drum is a Woman," was broadcasted on television in 1956. Although they had two very different styles of composition, it is often difficult to tell where Ellington's work ends and Strayhorn's begins. Regardless of this, Strayhorn was recognized for his contribution to the group. He was the 1946 recipient of the Esquire Silver Award for outstanding composer, for example.

Strayhorn worked closely with Ellington for the rest of his life, with the brief exception of a break from the band in the 1950s. In addition to Ellington, Strayhorn associated with several other musicians and celebrities. Notable among these is the famous actress Lena Horne, with whom he became close friends. Strayhorn continued to live in Harlem, New York, spending brief periods of time in both Hollywood and Paris.

In 1964, Strayhorn was diagnosed with cancer of the esophagus, linked to years of smoking. With the support of friends, including Horne and Ellington, he fought the cancer for several years. Despite the surgery and radiation treatment, however, Strayhorn's suffering increased. During his last months, he became too weak to work and spent most of his time with his partner, Bill Grove. On May 31, 1967, Strayhorn died at the age of 51 at the Hospital for Joint Diseases in New York. In commemoration of his life, Ellington recorded ...and His Mother Called Him Bill,a collection of Strayhorn's compositions. Ellington also funded a scholarship with the Juilliard School of Music in honor of his close friend.