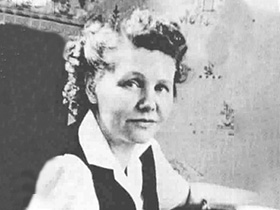 Margaret Beebe Sutton was born in Pennsylvania in 1903. She began writing after graduation from the Rochester Business Institute. Sutton is most well-known for her Judy Bolton mystery series for young readers. She published 38 volumes of the series before her death in 2001.

Margaret Beebe Sutton was born January 22, 1903 in Odin, Pennsylvania and was named Rachel Irene Beebe. Her father was Victor L. Beebe, a historian, musician, and carpenter, and her mother was Estella Andrews Beebe. She married William Henry Sutton in 1924 and the couple had five children. Sutton's husband died in 1965 and she married Everett Hunting in 1975.

Sutton attended the Rochester Business Institute in New York to become a stenographer. After graduation, she became a secretary and also worked in the printing trade. Her writing career began after her marriage to William Sutton. She wrote stories for her husband's daughter Dorothy and in 1932 she published her first Judy Bolton Mystery, The Vanishing Shadow, under the pen name Margaret Sutton.

Sutton's most notable contribution to literature is her Judy Bolton Mystery series for young readers. The small number of sequels to books upset Sutton, and as a result she created the series so children could have a character to follow over time. She once said, I still feel that a good series book meets the need children have to find a book friend who will appear in story after story. Libraries need quality series books to keep children reading. Sutton also wrote a religious education curriculum, Letters to Live By, that has been published and taught in churches throughout the United States.

Sutton based many of the Judy Bolton stories on events from her hometown, Coudersport, Pennsylvania. In 35 years, Sutton published 38 volumes of the Judy Bolton mystery series, which sold more than 5 million copies. The series is considered to be very successful after surviving the Great Depression and competition from the Nancy Drew Mystery Stories. Sutton was a member of the Women's National Book Association and the Author's League. She was also an advocate for fair housing, which inspired her to write The Weed Walk (1965), which protests segregated neighborhoods.