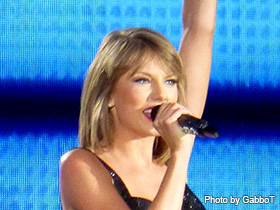 Singer Taylor Swift was born on December 13, 1989 in Reading, Pennsylvania. She grew up in nearby Wyomissing, until her family moved to a suburb of Nashville, Tennessee, so Swift could fulfill her dream of becoming a country music artist. At the age of fifteen, Swift signed with Big Machine Records, and subsequently began recording music she had written during her high school years. She has achieved great success, despite her youth, including several number one hits and a Grammy award nomination.

Taylor Alison Swift was born on December 12, 1989, in Reading, Pennsylvania. She grew up on a Christmas tree farm in Wyomissing, Pennsylvania with her parents, Scott and Andrea Swift, and younger brother, Austin. Her maternal grandmother was an opera singer in Singapore and Puerto Rico, and performed in operas including The Barber of Seville, Bartered Bride, and the musical West Side Story. Even at a young age, Swift preferred country music, telling Great American Country, "I listened to legends like Dolly and Patsy Cline--women who were the essence of country music." She also enjoyed children's poetry, including Shel Silverstein and Dr. Seuss, and noticed that rhymes tended to stick in her head. In the fourth grade, she won a national poetry contest for a poem titled "Monster In My Closet." As a member of a local children's theater group, Swift won the role of Sandy in a production of Grease and noticed how her own singing sounded country. She took this as a sign that country music was where she fit in.

Swift soon decided that she needed to sing in front of as many listeners as possible, and began singing at karaoke contests, bars, festivals and fairs. She also sang the National Anthem at every venue she could, including a Philadelphia 76ers game. At age 11, she made her first trip to Nashville, Tennessee, where she naively handed out demo tapes to secretaries at recording studios. She later joked about this to Great American Country, saying, "I was like, if I want to sing music, I'm going to need a record deal. So, I'm going to get a record deal. I thought it was that easy. I made a demo tape of me singing along to karaoke songs and my mom and I started walking up and down Music Row handing them out to receptionists at every label. I think I had like one person call me back. And he was so sweet, just kind of telling me, 'You know, this is not how you do this.'"

Though she returned home without a recording contract, she had gained new insight into the music industry. Swift decided that she needed to become as self-sufficient as a singer as possible, and the way to do this was to become a songwriter. She was given her first guitar and began teaching herself to play by practicing as much as four hours a day until her fingers would bleed. As her guitar playing and songwriting skills grew, Swift began taking more trips to Nashville to write songs with some of the most talented up-and-coming songwriters. At the age of 12, she performed the national anthem at the U.S. Open tennis tournament where caught the eye of the manager of pop singer Britney Spears, and subsequently was featured as a rising star in a campaign for retailer Abercrombie & Fitch. Less than year later, she was offered a recording contract with RCA Records, which she turned down because she would only be allowed to record songs written by another person. During this time her parents made the decision to relocate the entire family to Hendersonville, a suburb of Nashville.

Swift's big break finally arrived at a showcase at The Bluebird Café, where she was noticed by an executive from Big Machine Records. She decided to sign with the newly formed label, and began recording her first eponymous album. During the summer of 2006, at the age of 15, Swift released her first single, "Tim McGraw," a wistful song describing the recollection of a summer romance. The track quickly became a top-ten country single, peaking at #6, and turned Taylor Swift into a household name. The music video for "Tim McGraw" reached #1 on Country Music Television's (CMT) video charts and was awarded the Breakthrough Video Award at the 2007 CMT Awards. Released on October 24, 2006, Taylor Swift rose to No. 3 on the Country Albums chart and No. 19 on the United States albums chart, and sold more than 40,000 copies during its opening week. Swift released three other singles off the album, all of which ranked within the top ten of the U.S. Billboard Hot Country Songs. "Our Song," a single from Taylor Swift originally written for Swift's high school talent show became a number one single on the U.S. Billboard Hot Country Songs chart and won both Female Video of the Year and Video of the Year at the 2008 CMT Awards. In the same year, Swift was accorded a bigger honor: the 2007 Country Music Association's Horizon Award (now the New Artist of the Year Award). She was also nominated for the 2008 Best New Artist Grammy award, but lost to Amy Winehouse.

In response to the success of her first album, Swift began touring with both Brad Paisley and Tim McGraw and Faith Hill simultaneously in 2007. She began opening for Rascal Flatts on their tour in Spring of 2008. During the summer of 2008, a rumor began circulating that she was dating Joe Jonas of the teen pop group, the Jonas Brothers. In November, 2008, on Ellen DeGeneres' talk show, Swift confirmed that the two had broken up. Swift wrote a song about Jonas, titled "Forever and Always."

On November 11, 2008, Swift released her second album, Fearless. The album debuted at number one on the Billboard charts, selling 592,000 copies in its first week. Fearless held the number one position for eight nonconsecutive weeks, making Swift the first female country artist to accomplish this feat. Rolling Stone gave the album four out of five stars, proclaiming, "It's hard not to be won over by the guilelessness of Swift's high-school-romance narratives... Her music mixes an almost impersonal professionalism — it's so rigorously crafted it sounds like it has been scientifically engineered in a hit factory — with confessions that are squirmingly intimate and true." Billboard agreed, writing, "Those who thought Taylor Swift was a big deal after the release of her first record should be prepared: She's about to get way bigger. Though they're written by a teenager, Swift's songs have broad appeal, and therein lies the genius and accessibility of her second effort." At the end of 2008, Nielsen SoundScan announced that Swift was not only the number one selling artist of the year, she was also the first artist in history to have two top-ten albums on the year-end album chart—Fearless at number three and Taylor Swift at number six.

In September of 2009, Swift received an MTV Video Music Award (despite outbursts from rapper Kanye West) for Best Female Video for "You Belong with Me", and In November of that year she became the youngest artists ever to win a Country Music Association Award for Entertainer of the Year. In July of 2010, Swift released her next CD entitled Speak Now, and its first released track "Today was a Fairytale" topped charts, continuing her success. Other songs released from Speak Now include "Mine" and "Sparks Fly", both of which made charts. With all of Swift's fame, she has not forgotten her humble beginnings. Recently, Swift contacted Scholastic Books in order to donate 6,000 books to the Reading Public Library in her hometown of Reading, Pennsylvania. With a total cost of $68,000, these books are greatly appreciated by the library as well as the community. The donated books are marked by a white star on the spine and a sticker on the inside cover to show Swift purchased them. The Reading Public Library was close to shutting down, and Swift's donation not only helped boost the library, but Swift's popularity will hopefully motivate children to continue reading.

There is no doubt that young Taylor Swift has taken the world by storm. From her catchy songs, to her minor acting roles, to her philanthropic work and generous donations, Swift is sure to stay in the forefront of American society for a while to come.